The fourth and fifth elements of thud

It seems my misguided tip for Burial winning the Mercury Music Prize has turned his career to drizzling balderdash.

"Burial revealed his conversion to the new dance movement - a mixture of Clit 'n' Bass with the darker elements of Bowelshift - after failing to win this year's Mercury Prize."

He is teaming up with neo-Fudgecore artist Crank 2526, who...

"...is a genius. He has taken the thud, thud, thud of Dubstep and added at least two extra thuds. It's totally cronking."

This is all completely true. Full story on the ever reliable Daily Mash here. (Contains naughty words.) 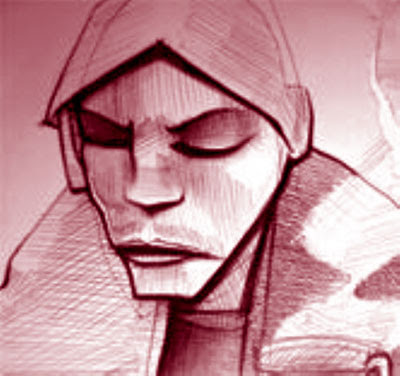 I'm blogging "as live" while I sit with my poorly cat to watch the 2008 Mercury Music Prize on the tellybox. The following text was written as it happened and has not been edited.

9.55pm: I make a glass of orange juice and stare at the TV screen. If Burial (pictured) doesn't win, I'm going to smash in my telly. I scan the room for a suitable heavy object. I look at my sleeping cat. She's quite big. Not fat, but tall. I consider what it would be like smashing in a TV screen with a cat. I drink my juice.

9.58pm: The programme starts shortly. Massive junglist Goldie has just lost some orchestra conducting contest to either Mel or Sue out of Mel And Sue. Clive Anderson is presenting this programme. I wonder if he will stay on my telly and present the Mercury Music Prize.

10.01pm: Ooh, it's starting. The titles are all blue and neon like it's Casualty or something. Lauren Laverne, ex-90s indie star, is presenting. She interviewed Squarepusher once and she looked like she didn't know who he is. I hope she rates Burial. She's just called the nominees a "mish mash".

10.04pm: The Last Shadow Puppets are performing; they're how I would like the Coral to sound. Some indie band has just played, and now there's a woman hammering her fist on a piano. Oh look, now it's British Sea Power, who are glorious.

10.08pm: During a bit of punditry which makes it sound like a football programme ("Simon Armitage: "He can do no wrong for me."), I wonder what 'mish-mash' music would sound like and how I would dance to it.

10.10pm: After some r'n'b nonsense, Burial's Ghost Hardware lights up my TV like a solar flare, but a really dark solar flare. Oh please God let him win. Gosh, is that Robert Plant? Hasn't he got wavy hair?

10.12pm: Lauren Laverne: "It's not just a young man's game any more, is it?" It's not flapping FOOTBALL, for gizmo's sake. Props to Armitage who desperately wants the mysterious Burial to turn out to be a "retired military historian from Kent."

10.14pm. This is moving on apace. Oh tindersticks, it's Adele. GETHEROFFTHESCREEN! Aaaargh, my ears hurt, Make her stop! Oh, she has. And now it's Radiohead, who are God and I will punch anyone who critizised them. With my cat.

10.20pm: That jazzy guy with a lady's name with slicked hair (Jules something) is bigging up the audience with a bit of sub-Stephen Fry wordsmithery. I suddenly want Elbow to win. Or Portico Quartet, just to wobble the applecart. Maybe I'm just mentioning these bands so I don't look so foolish when Burial doesn't win.

10.28pm: My poorly cat sleeps on, her paw snuggled over her eyes, while Elbow do a refreshingly good-natured interview with Laverne. She's got some kind of virus that keeps attacking her every few months, poor thing. My cat, I mean, not Lauren Laverne. I decide not to use her to smash in my tellybox. I switch the TV off instead and and let my cat console me for tipping the wrong winner.

"No. No. You've still lost me. Could you rewrite it with just the facts and about 50% less nonsense?" 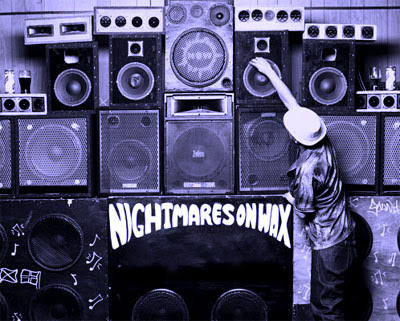 Them's that's got eyes upon to see, them's not hatheth the brains wot to unnerstand whath the heck they're looking ath with them eyes eth th thth.

This famous quote by Lord Something-Of-Somethingorother, who was afflicted with an appalling lisp, reminds me of the most common criticism of my blog: "it makes me laugh, but I have absolutely no idea what you're saying most of the time".

So let me make this simple:

This is a blog post. It is a review of some recently released records. The records are not well known, because I'd rather punch the panda of pop into next week's zoo and crack open a sparkling giraffe of dubstep instead.

Nightmares On Wax is back. thought so... is his annoyingly titled new album which plays havok with those of us who like our ellipses at the end of sentences and our capitals at the start.

There, the havok stops, because this is the earhole equivalent of soft furnishings, of magnolia, of a shop assistant's smile, of baked beans without the chilli powder, of food in a university refectory.

In short, it is not an Affleck's Palace: it is an Arndale Centre.

A tastier take on chill-out comes from Araya, whose debut LP Bridge Of Hesitation is grounded with tinkling synths and guitars, not unlike Lemon Jelly's more comatose moments, before being kicked up the arse with a more wiry version of the Boards Of Canada production ethic.

I can only review the mp3 version, which is a glitchy, meaty platter that pleases from the opening Plaid-ish chimes of The Mast to the panicked cut-up vocals of the stomping closer Child, Let's Stop.

The CD edition has more tracks, and even has a cut called Murakami's Kangaroo Zoo. For haruki's sake, what next - Ishiguro's Badger Super-Collider?

Finally, it's time to mirror, signal and (Roots) Manuva. I'm not sure what that means: but I do know that the best British rapper of the past decade has a new album called Slime And Reason. If you don't buy it, the super-collider will explode and we'll all be turned into purple semolina.

The sound of elephants falling on xylophones

There's a well posh bash at Manchester Art Gallery this Thursday, and I can't make it - but you can if you're quick on your heels.

Well, actually, it's not that posh. I only say that because they've got wine.

It's an evening of electronic music called Duos. Your glamorous hosts are Homelife's Paddy Steer and Sir Graham Massey, who you may remember from Hit Squad Manchester and some other band called 88 Slates or summat.

The whole thing is set against the visual scrumptiousness of sculptor Gwon Osang, although I wouldn't know about that sort of thing because this is a music blog and not an art blog; unless sculptures make a nice ding sound when you flick them with your finger, I'm not too bothered.

It's 7pm this Thursday, and tickets are a tenner (the money not a fat Italian singer) from the Library Theatre box office, the world webbed interwide or by phone on 0161 236 7110.

Oh and I may have already mentioned, Barefoot are providing some nice plonk (the wine, not the sound of an elephant falling on a xylophone).