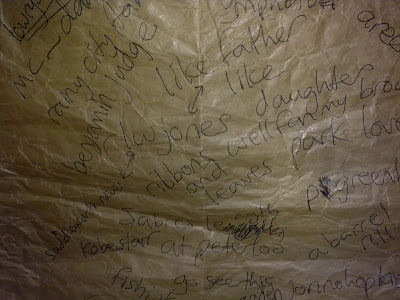 This week, bloggers from all over Manchester staggered into Common for their regular blog meet. The results of the last one are indelibly stained in the form of this blog post.

Naked people sponsored the boozebeer - or, more specifically, the Lowry and their excellent Spencer Tunick exhibition - and so the merriment spilled late into the evening. Because I'd been drinking bleach beforehand to steady my nerves, I took notepaper for fear of forgetting everyone's blog names.

Or rather, I took a brown paper bag (see picture).

Dear blog reader, I'd like you to introduce you to the people I met. The information I'm about to proffer was not learnt on the night, but is snippets of fact and fauna I've ripped from Twitter feeds and various loose ends of the internet.

At least I can pretend I got to know everyone really well.

If I have libelled you or neglected you or offended you or scared you from what is, essentially, stalking, please leave a comment below and I will make amends once I've finished off this bottle of handwash.

Dr Maria Aretoulaki does speech recognition and likes films that remind her of the Matrix. She tells students what to do with their lives. (Twitter.)

Dave Hartley is a rabbit-lover with a bent for science fiction. He has a sonic screwdriver pen and reads Nintendo magazine. (Twitter.)

Fishink is a bit more of a mysterious online person, but I assume it is this artist who makes prints and animal illustrations. Edit: Fishink produces cards and notebooks and other lovelies over at this site. There are birds and hedgehogs and huffy-faced cats and it's all super lovely.

Jordan Ahmadzadeh works for the Lowry and likes a bit of Muse. He likes cake, buttercough syrup and shower gel. (Twitter.)

Gill Moore is a photographer and a Talking Heads-loving cyclist. She stalks peregrine chicks, but in a good way. (Twitter.)

Go See This (Twitter) isn't a blog but is a website about things to do in Greater Manchester, and it's edited by Adam Comstive who owns a mixtape containing Mansun and Tribe Called Quest.

Jonathan Hopkins is a bike-riding music blogger. He's outspoken about Mr Scruff's Get A Move On and once spotted Pete Waterman in a bar. (Twitter.)

Kobi Omenaka is a snowboarding, capoeira-playing Ferris Beuller fan. His opinions on the early Sugababes was a point of some contention, mainly with me because I'd become aggressive from drinking battery the acid I'd got hidden under the table. (Twitter.)

Richard Jones is a stay-at-home dad who likes a bit of sport. He writes for the Saddleworth News (tags include Delph, Diggle and Dobcross) and went to Slovakia on his stag do. (Manchester Twitter / Saddleworth Twitter.)

Marie-Claire Daly is an art lover who watches history programmes. She probably should have backed up her laptop. (Twitter.)

Kath Horwill is a self-confessed park lover who makes a mean brownie. She runs a lot and although she is often surrounded by children, she has never caught nits. (Twitter.)

Paul Greenhalgh is an SEO consultant and wants John Cage to be Christmas number one. He is a FourSquare super-user. (Twitter.)

Rainy City (Twitter) is an interactive writers' map of Manchester and is the work of Manchizzle (Twitter) and Mancubist (Twitter). Manchizzle organised this whole blog meet malarky.

Ribbons And Leaves is a blog with a difference: it is typewritten. Its creator, Benjamin Thomas, is a Liverpudlian exiled in Manchester and once wrote an open letter to MCA from the Beastie Boys.

Sabres Length At Peterloo is also called Mo. He, like me, finally got round to visiting the Imperial War Museum North. He, unlike me, has learnt his lesson from drunk texting.(Twitter.)

Mitzy has the campest blog title ever and has my favourite new blog because she voxpops to create blog posts and calls her site a "news gazpacho".

Edit: Of course, I forgot Words And Fixtures. Again. Which is strange, because I thought to myself the other day, "thank goodness I remembered WaF this time." But I didn't actually do the actual thing of writing the actual words about her on the actual blog. Anyhoo, Sarah-Clare Conlon went on the Sky Ride and her cat hunts peacocks. She has a predeliction for bookshops and putting up tents, although not usually at the same time. (Twitter.)

Finally, thank you to everyone for making it such an enjoyable evening. It's difficult to network or to build up friendships at a blog meet, but I had so many laughs and met so many interesting people, it has definitely made Manchester an even better place for me than it was before.

Why do you always forget me, Mr Roland? WHY? Is it because I didn't vote for your tidy desktop? I thought we'd straightened that one out. I hope not to have to keep losing sleep worrying about these constant omissions, otherwise I too might have to turn to cleaning fluids to get by. Cillit-Bang, and the dirt is gone.
Best wishes, Words & Fixtures

Thanks for the 'mysterious' mention lol

If you wouldn't mind adding a link to my proper site it's
www.fishink.co.uk the etsy one is old and unused for now.

Great article by the way Thanks Craig

Clare - oh my word, that's really odd. I remember chatting to you and I was convinced I'd included you in the post. Oh dear. Oh dear oh dear oh dear. I *so* owe you a drink for forgetting you twice. You have now been added.

Craig - Yay, I was hoping you'd comment. You've been added in. Sorry for not finding you online, even though you have a really clear .co.uk URL!

Thanks for the update. Great blog by the way, being a music child of the 80's, It's right up my street !
Craig

Have you just invented battery-acid-house in the middle of this blog?

I'm on one matey!

Battery acid house - it's what all the hippest hens are dancing to.

I put you on my google reader after the meeting but you cant post comments so this has been a while coming!

I think the early Sugababes was only a surprise to you! Frome what i remember most of the table were in favour of the their early work!

Do you know if Jonno has seen inception yet - we should talk about it at the next meet up!

Also - i saw toy story 3 the other week - emotional!

I remember it differently. Everyone definitely agreed massively with everything I said all night. Yep. That's what happened.

"Hey, Fats, you're right about that, oh wise one," people would say, sometimes hundreds of times over.

FACT. Or possibly not.

Toy Story 3 is brilliant and every bit as stunning as Inception, just in a different way. Dunno if Jonno's seen it, but I'll see him on Monday and if he hasn't watched the film, I'm going to dive into his mind and make him *think* he has watched the film.

Oh you were in a dream - inception stylee!

jonno is the architect, you wouldn't suspect him as he made you believe he hadnt watched inception!

I noted you post on Magnetic Man - BIG. What about Katy B that even made number one - i heard on the grapevine!

I've only just noticed that Katy B track, really. I saw her name and thought she was one of the Spice Girls.

She got to number five, which is better than Magnetic Man's number 10, so she kicks ARSE.