1993 changed my life: the beginning

Last year, or twenty recessions ago, I blogged about how I discovered Orbital up a tree. The moment still flutters hazily in my Blue Nun-numbed brain: one of those memories that may manifest itself as a crystal-clear hallucination once dementia robs me of my sharp, er, thingy, mind.

Following that blog post, other flashes of memory appeared: other albums or tracks from the same period that now seem to carry echoes of the music I have since loved. I'd remember an old rave beat and hear within it the sound of later drum 'n' bass or electro.

And then I noticed that most what I was remembering was from the same year. 1993. I can't think of another 12 month period that has been so formative in my passion for music, despite hearing life-affirming albums every year since. 1993 changed my life. You'll have your own Year-with-a-capital-Y, I'm sure.

Nostalgia is dangerous. On YouTube the other night, I watched a current-day 5ive, Atomic Kitten, Blue and PJ & Duncan perform a medley of their hits for Saturday Night Takeway. It was horrific. It made me think the world would never be a good place again, especially since it climaxed with a ridiculously energetic Let's Get Ready to Rhumble that was not only cretinous the first time around, but will be even worse when it returns to number one this Sunday.

There is a danger that by launching a blog series reminiscing about a year that may have little relevance for you, this will be your equivalent of you ogling the telly and saying "blimey, Lee from Blue's been on the pies, hasn't he?"

Except that's what I'm going to do. Welcome to a new blog series. Twenty albums or tracks from 1993 that meant the world to me. Some of them are awful, but all of them are important.

I'll post a couple of times a week and we should be done by, ooo, early June. By then, Rhumble will be a distant memory and the weeping can stop.

Further Fats: more nostalgia on A low-denominator, low-rent scally by any other name would smell like sweets
No comments:

Email ThisBlogThis!Share to TwitterShare to FacebookShare to Pinterest
Read more on: 1993 changed my life

Every Guardian music 'crepuscular' reference since the start of 2010, probably 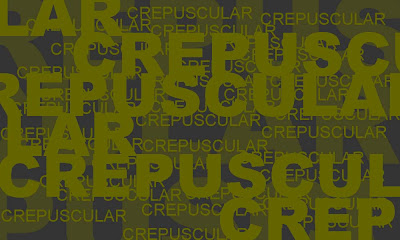 Words are great, aren't they? With their cute little letters and dots and that?

I have a constant paranoia that I tend to lean on certain words, especially writing about music. For example, I'm fond of blithering, such as a blithering vegetable here, blithering into a micromophone or me being a blithering hypocrite.

And searching for 'fatroland' and 'crikes' may overload google to the point of exhaustion. Crikes.

Many music writers do it. I've rarely seen the word 'sophomore' outside of rock-album-speak, while the NME's rendering of Northern swearing as 'fooking' is as prevalent as its Southern 'facking' counterpart is as absent.

'Crepuscular' is normally reserved for animals that come out at dawn and dusk, such as the crepuscular nightjar. That link says the nightjar is a 'goatsucker' and spreads a disease called 'puckeridge'. Bands are not, generally speaking, goatsuckers, but they do tend to attract the adjective 'crepuscular'. Especially if it's the Guardian describing them.

The Guardian has taken the word 'crepuscular' to new lengths in its music writing, as pointed out in this sweary tweet from my Electronic Sound collaborator Bill Bruce. It's a useful word, really, because 'crepuscular' relates to 'twilight' - but you can't say 'twilight' because people think of vampires.

An early Grauniad music usage was Alexis Petridis' two crepusculars in a Blur live review and album review from 2003. But I think Caroline Sullivan pips him to the post with her short 2001 review of Copenhagen's Tales From the Forest (scroll down) where she called them the "Tindersticks school of crepuscular pop".

How crepuscular is the Graun's music writing? Let's add to those three uses another 27 crepuscular musical references in the Guardian from 2010 onwards (I stopped counting after three years of archives). And there's me blithering on for years without using it once. Crikes!

Every Guardian music 'crepuscular' reference since the start of 2010, probably

New band of the day: Lulu James by Paul Lester (2013)
"...this is a decent refinement of that kind of crepuscular ambient music with soulful vocals..."

Dinos Chapman's debut album: here comes the Luftbobler! by Alexis Petridis (2013)
"...he's only talking to me because he has an album coming out: a collection of crepuscular electronica called Luftbobler..."

New band of the day: Sohn by Paul Lester (2012)
"...there is a fine line between the two, with a similarly contemplative, crepuscular ambience conjured, but the rhythms are less twitchy, more regular than Blake's..."

The xx: Coexist – review by Kitty Empire (2012)
"...'Did I not let enough light in? asks crepuscular, whispering Madley Croft on Chained..."

The Vaccines: Come of Age review by Alexis Petridis (2012)
"...musically it's terrific: winding, crepuscular, decorated with spikes of Pixies-esque guitar..."

The Weeknd: Sounds and sensibility by Hermione Hoby (2012)
"...songs built around a fogged, crepuscular production to set off the keening perfection of his voice..."

New band of the day: Daughn Gibson by Paul Lester (2012)
"...playing on one a series of country songs or noir torch ballads and, on the other, some creepy, crepuscular dubstep..."

Bobby Womack: The Bravest Man in the Universe review by Kitty Empire (2012)
"...informed by the insectoid tickle and crepuscular haunt of London's post-dubstep sound..."

Bob Dylan's Tempest: first listen (2012)
"...In terms of the Dylan canon, does it bring to mind the crepuscular menace of Not Dark Yet? Perhaps it's more Forever Young..."

New band of the day: Psychic Dancehall by Paul Lester (2012)
"...a fair dollop of David Lynchian 'crepusculiarity', a contraction of 'crepuscular' and 'peculiar' that we just coined, cos we're crazy like that.."

New band of the day: Flume by Paul Lester (2012)
"...there are similarities with the Toronto wunderkind's crepuscular penthouse blues..."

Lana Del Rey review by Caroline Sullivan (2011)
"...her America is defined by crepuscular creepiness crossed with nostalgia for the Rat Pack 60s..."

Esben and the Witch: Violet Cries review by Caroline Sullivan (2011)
"...the crepuscular drama that constitutes their sound has been out of fashion for 25 years..."

The Horrors: Skying review by Kitty Empire (2011)
"...an endpoint steeped in irony, considering the band's fetish for all things crepuscular..."

Mogwai: Hardcore Will Never Die, But You Will review by Ally Carnwath (2011)
"...And their grasp of mood is undiminished, not least on the crepuscular blues of 'Letters to the Metro'..."

New band of the day: Gold Panda by Sean Michaels (2011)
"...his music is vaguely reminiscent of Burial's dubsteppy, crepuscular melancholia..."

New band of the day: Funeral Suits by Paul Lester (2011)
"...Mournful and majestic, with elements of crepuscular drama..."

Shostakovich: Symphonies Nos 2 & 11 by Andrew Clements (2011)
"...The opening movement, with its crawling, crepuscular string lines, is the most extreme music Shostakovich ever wrote..."

New band of the day: Trophy Wife by Paul Lester (2010)
"...They manage to turn Joanna Newsom's The Book Of Right-On into a thing of crepuscular rhythmic beauty..."

New band of the day: Lonelady by Paul Lester (2010)
"...a lifetime spent listening to crepuscular disco and dolorous songcraft..."

Lucia di Lammermoor by George Hall (2010)
"...the emotional ­extremity and shocking physicality of the ­production align well with the fiery exterior and crepuscular interior of the score..."

This stint in Independent shall be 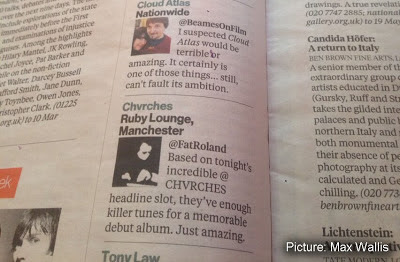 I appeared in the Independent today, in the bit where they go on about music and stuff. They paper-retweeted my total fanboy response to Chvrches first headline tour. Assuming paper-retweeting is a thing, which is most definitely now is.

I won't rattle on about the gig in question because I've written a review for a magazine, which I will link to when it stumbles bleary-eyed onto the internet for all to see. But the tweet the Indie purloined pretty much sums up what I thought: "Based on tonight's incredible Chvrches headline slot, they've enough killer tunes for a memorable debut album. Just amazing." So, sitting on the fence, then.

Quickly recognising my instant fame, I capitalised on the new, national interest in my Twitter feed with the following tweet:


To the hundreds of thousands of Independent readers now reading my tweets: I am a buffalo beautician and moon repair man. Hi.

That should do it.

I then changed my profile picture to match that of Electronic Sound, another magazine that will be parping my word juice from its internet pipes at some point soon. So that's all the Independent readers confused, then. Sorry 'bout that.

Thanks must go to Max, who told me about the Indie appearance just in time for me to catch the last copy in my local Spar. Max is far more famous than me: he appears in proper videos and that and puts my feeble Indie column inches to shame...