Fat Roland's Audio Spaceship episode 1: the time of my life 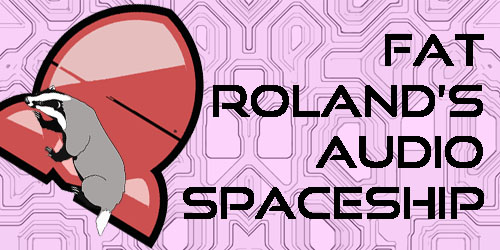 In preparation for my Edinburgh Fringe show Kraftwerk Badger Spaceship, I've done a thing. It's called Fat Roland's Audio Spaceship. I wrote and recorded it in one day on my phone, all first-drafty and clunky sound. You'll enjoy it.

In Fat Roland's Audio Spaceship, I waffle on about 1987, badgers, not-Kraftwerk, poo on a road, a vending machine scandal, Twitter and, to a lesser extent, funnels.

If you have any ideas about episode two of this, er, thing, let me know in the comments. 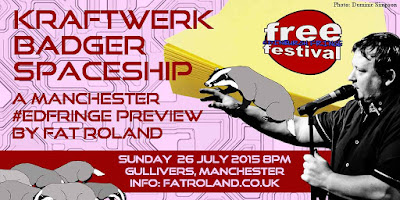 Kraftwerk Badger Spaceship is the name of my debut show at the 2015 Edinburgh Fringe. There will be a special Manchester preview on July 26th and you are invited.

My one-hour solo appearance in Edinburgh as part of Laughing Horse's free festival is "a spoken-word comedy about one idiot’s battle with electronic music... is it poetry or prop comedy or just a fat man with too many marker pens?"

Here are some dates for your diary...

When blog success propelled me into the sweltering heart of Manchester's performance scene, I never really thought it would come to this. I've just taken a week of work to knock the show into better shape - and I've been live-tweeting that process on the curation Twitter account We Are Manc. To be honest, having that accountability has kept me sane. Almost.

See you in Manchester / Edinburgh / Edinmanchesterburgh. 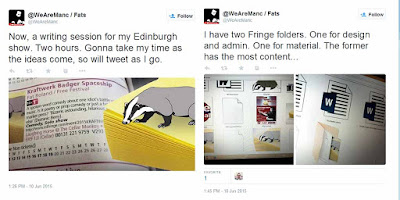 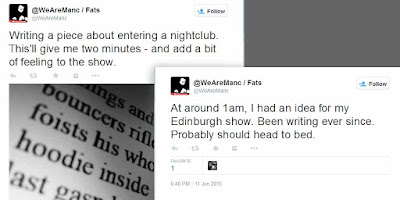 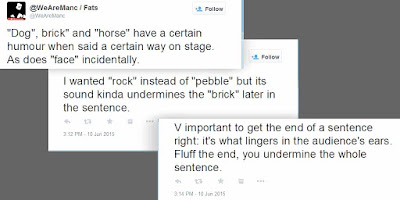 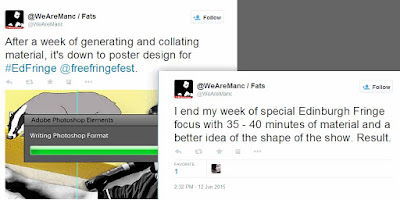 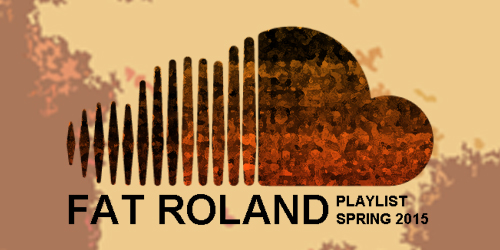 I've made a SoundCloud playlist for you to jam into your ears.

We start with the beautiful Throwing Snow, before Megatronic brings us into something a little less ethereal. There's some popular bass-shredders in the middle, and then Lukid starts off a really dour section that should separate the techno-heads from the, er, techno-headlesses. And yes, there's a track in here that sounds well Orbital.

This is all recent or only slightly dusty. Happy listening.

The Saboteur Awards: doing quite well at spoken word and that 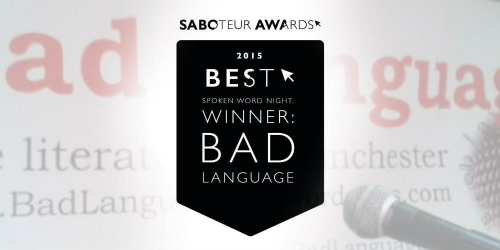 I’ve done it again. I’ve won an award. It’s been five years since the last one. This was, though, much more of a collaborative effort: Bad Language won ‘best spoken word night’ at the 2015 Saboteur Awards, which means it’s the best spoken word night the UK. Or at least, in the geographical area that covers Saboteur funding. There may be other spoken word award ceremonies, I don’t know. There are probably thousands of them. Millions. Anyhoo, it’s good, whatever it means.

I decided in 2013 that I wanted to run Bad Language. I went to B&Q, bought some pitchforks, and scared two thirds of the organising team off to London. Third organiser Joe Daly proved a much stronger foe: he insisted on running it with me. Our organising meetings consist of us throwing rocks at each other while shouting really long names from the Bible. Somehow, we manage to put on well-attended nights without everyone being fried by killer robots, and the Sab Award has made all the hard work worthwhile. Thanks to the hundreds who voted for us. This is a testament to the dedication of our audience, the commitment of our performers, and Joe’s immense drive for new and interesting events.

I couldn’t make the ceremony itself. I had to be in work to throw some numbers at spreadsheets. Joe went to the Sabs with Bad Language co-founder Dan Carpenter. It sounds like they had a great time. They hooked up with all sorts of people from the UK literature scene: I’ve seen the photos on Facebook of them all bleary-eyed and wine-stained. I’m not bitter. E17, by the way. That’s my favourite spreadsheet cell. That and U96. I sometimes sing Stay Another Day and Das Boot as I sit there in front of the spreadsheet. On my own. No, I’m not bitter at all.

It’s been an honour to co-host Bad Language for the past 14 months. I don’t know where we go from here: our only aim is to put on great live literature in Manchester. So we’ll do some more of that.
1 comment: