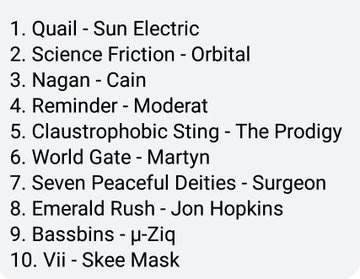 Here's what has been plopping up on my Spotify recently.

As you know, Spotify has a "random" function, where it chucks all of your mp3s into a tombola. It picks them out one by one, and no one gets a prize at the end. Here's an arbitrary chunk of ten (see picture)

I've deleted all the duplicate artists in this list. Also, I nixed a Transglobal Underground track because I really wanted to get Skee Mask in there. It's cheating. Sue me.

What should I add to my Spotify playlist? Hit me up in the comments below.
No comments:

Back to the Edinburgh Fringe 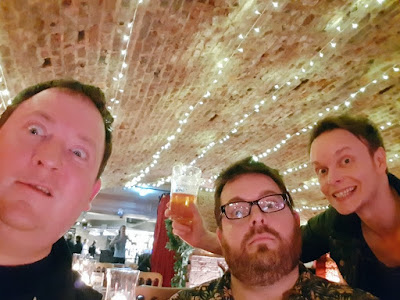 I went to the Edinburgh Fringe and it was good.

My previous visits have been frantic, either because I was only visiting for a few days or I was doing a show. This year, I went for a full week which gave me time to go for meals and drink with friends and be a normal human being.

That said, I did see a lot of shows. My highlights were:

> Barbara Nice's wonderful show Raffle which is, er, a raffle

> Having Brian Gittins asking me my top 50,000 types of horse and being prepared because he asked me the same thing in last year's show AND I'VE BEEN THINKING ABOUT IT ALL YEAR

> Recounting my time at a racist guest house for Tales of Whatever (pictured above: me and the Tales chaps)

> And so many other good performers: Foxdog Studios, the Delightful Sausage, John-Luke Roberts, Sean Morley, Sheeps, Beach Hunks, the list goes on, except it doesn't because I've stopped typing it

I didn't bring my Seven Inch show to this year's Fringe because the set design, which is rather integral to the whole thing, is too complex and/or bulky for touring.

That said, I've got some big ole live shows coming up (check my live page), so I'm currently formulating a new hour of material. And with a week full of Fringe audiencing still rattling in my head, I'm not short of inspiration.
No comments: 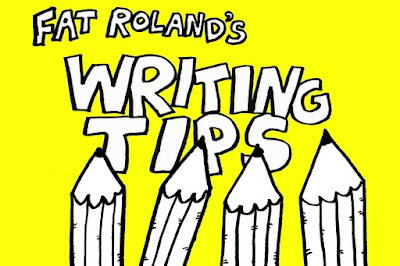 Do you like words? Do you like making words with a pen, or perhaps with a keyboard?

Here are some writing tips in the form of a brand new video I've recorded and edited (below). It's only two minutes long and it's hardly sophisticated, but it took me about six weeks to make. Lawks. Please, Gods Of Simple Animation, make the next one quicker. The music you hear in the background is also by me, using my magical musical fingers.

It's all a load of stupid, but for people doing creative writing, there are pretty solid tips in here. I'm your mother, sneaking in vegetables with distraction techniques. 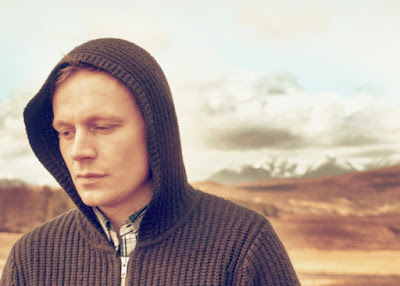 Back in early 2015, when all this was just fields, I praised the "epic playfulness" of Cain's Savan EP. Cain is a Scottish DJ who's played with Amon Tobin and Mike Paradinas, so my blog comment must have been, er, just the boost his career needed.

I recently revisited the EP and now I'm obsessed with it. I'm playing it over and over again. I don't know what it is - it's so tuneful, so fun, and drizzled with dashings of Delhi-style melody. Nagan is especially brill.

It's funny how a record can reappear from the past and grab you more than ever before .The same thing happened with Death In Vegas's Dead Elvis album. Have a listen to Cain below.

Incidentally, Cain is back with a new extended play. The Eshu EP came out a couple of weeks ago and is positively tribal.