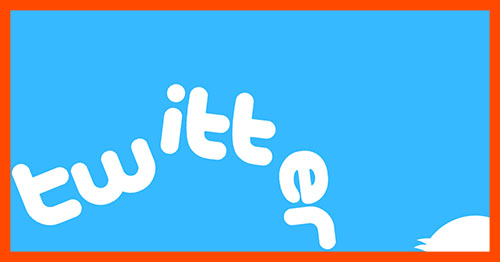 An end of a month is a time to take stock. To think about our regrets. To consider the endless void. To paint our toenails cherry red and hide inside a trifle.

Here are some recent tweets from my FatRoland account. It's a way of creating blog content with as little effort whatsoever. I suggest you put an equal amount into reading this.

Regrets. The void. Trifle. It's all here. Yes, including the trifle: each tweet will be accompanied by a trifle ingredient, which I suggest you eat at the same time as reading.

1. Breakfast
Been around the cinnamon whirl and I I I, I can't find my bagel.
Ingredient: custard

2. Appointment
I am delighted to announce I am the new CEO of Twitter. Character length increased to 20,000. Only cartoon avatars. Scratch and sniff. 5p per retweet. Cats with beards.
Ingredient: jelly

3. Grift
If any health companies or meat distributors want to give me £100,000 to ask questions in parliament, please get in touch. "Do you like ham?" "What's your fave rash?" I'd be really good at it.
Ingredient: strawberries

4. Festive
Just so people know where I stand on this, I think Christmas should be aggressively enforced all year round. Everyone to dress as Santa every day. Only trees allowed to grow are Christmas ones. Cars have baubles instead of wheels, etc etc.
Ingredient: chocolate

6. Hope
Okay gang, it's a new day, fresh start, new goals, we can achieve amazing things together. You get the butter and I'll start asking round for funnels.
Ingredient: sponge (food)

8. Anniversary
On this day 24 years ago, all five members of the Sneaker Pimps climbed into Robbie Williams's mouth and were never seen again.
Ingredient: wafer-thin ham

10. Despair
The inappropriate fade-out on the Spotify version of Orbital's Lush 3-1 is why the world's gone to hell in a hand dryer.
Ingredient: baking tray

11. Etymology
Today is Halloween, which as we all know comes from the phrase "Hello, Ian".
Ingredient: armchair(s)

12. The big question
Who was the renegade master, what were they trying to damage, and were they behaving ill so they could bunk off work?
Ingredient: the 18th century

Apart from the music, there is one thing wrong with Ed Sheeran's Tiny Desk Concert 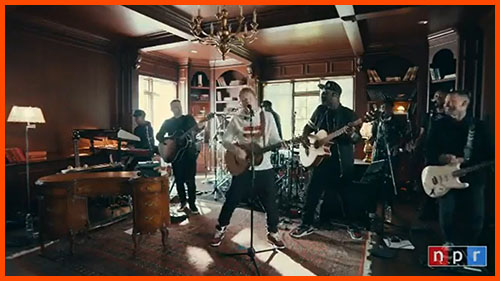 Here's a screenshot of the pop music artist Ed Sheeran performing one of those NPR Tiny Desk Concerts.

I can't remember what he performed. One of his pleasing ditties, I suppose. A warm guff of mainstream melodies. Maybe he performed a six hour homage to kittens being drowned in a vat of Monster energy drinks. I don't know. I could barely listen to more than a few seconds of his Tiny Desk Concert.

No, the music is not the point here. Take a look at that screenshot. Go on. Take a look. Take a close look. Can you see what's wrong? It's there, glaring you in the face. 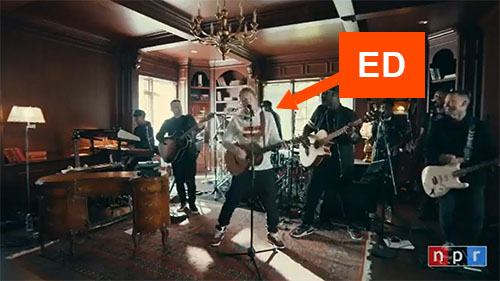 Look at his cute hamster face. He's holding that guitar deftly. No doubt he's good at holding other things, like potted plants, soft cheese or ransom letters. Ed is standing in the middle of the room, light from the windows gushing through his legs. He is, right at this moment, probably singing the word "spatula".

Next. Here is the concert. 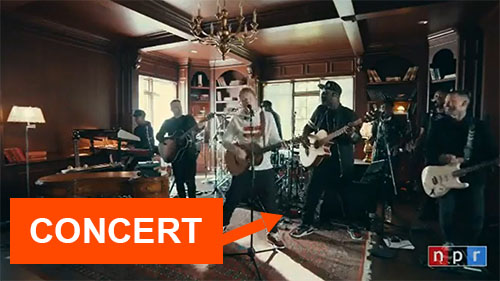 The musicians stand around Ed because standing around the singer is the minimum requirement to create a concert. I wonder what their names are. Malchom. Guffery. Kendoolix. Colin. Although we can't see a drummer, I reckon there are seven musicians. That's a lot of people to fit into a room, especially when it's a home library where half the books seem to be missing. Nevertheless, good concerting, musicians. 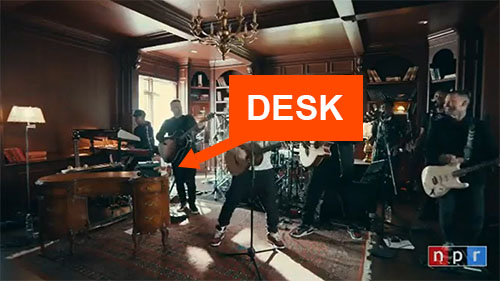 YOU'RE MEANT TO BE BEHIND THE DESK, ED. Not around the desk. Not near the desk. Not, as in this case, not only standing next to the desk, but facing the wrong way so you can't even shuffle sideways and open the drawers.

Even flipping Coldplay get the desk thing right. Look at how many people are behind that desk. There's even a poster on the left showing someone sat at a desk.

Ed Sheeran is doing it wrong. The desk, which may or may not be tinier than usual, is not being interacted with. It is separate from the performance, as if a desk thief has dropped it by mistake while running from the dining room to the billiard room.

The fact that it took me ten minutes of scrolling through Tiny Desk videos to find those desk-performance links because it turns out hardly anyone doing Tiny Desk concerts has a desk in their video therefore rendering the series a total con IS ENTIRELY IRRELEVANT. I just wanted to have a go at Ed Sheeran.

Stupid Ed and your stupid desk.