I have no qualifications. The only employment I've ever had was purchased through sexual favours. I am, basically, thick.

And so it seems almost criminal that I will be compering Bright Club this Friday. I shall be an amoeba amongst the boffins: an 8-bit bleep amid a symphony of extravagance.

Bright Club is the 'thinking person's variety club', and this month is based on the idea of obsession. Various brainy people try and present their specialism and raise laughs along the way.

I shall be a consummate host. Not because I am brainy, but because I am an expert at downing a pint of Cif and staggering about a stage in a really entertaining way.

Bright Club 7 all happens at 7.30pm this Friday at Nexus Art Cafe, Manchester. £3 in. See the event on Facebook or at Manchester Beacon.

That Cif really takes away the taste, y'know...
No comments:

This is a review of an Aphex Twin gig

Aphex Twin's* massive stadium tour, played out to 1.75 million people, finished its run in Manchester at the weekend.

I'd followed Aphex Twin back in the day, even to the point of having his posters up on my wall and everything. After he split in 1996, I wasn't too bothered, but since he reformed, I've developed an odd penchant for going to see him live. 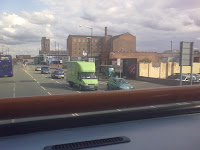 Here's me on the bus going to see Aphex Twin. The bus was packed full of Aphex Twin fans.

At this point, I was wondering if I'd recognise any of his new songs. He's never exactly been cutting edge, but that edge has seemed significantly blunted in the past few years. 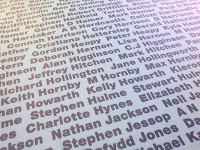 At first, I thought this sign on the wall was an Aphex Twin track title.

It turns out, this was something to do with the football that was normally played in the stadium in which the Aphex Twin concert was taking place.

As my eyes drifted along the typeface, I asked myself how many of the 55,000 Aphex Twin fans at the gig would recognise these names. 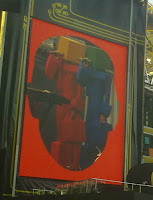 Aphex Twin's supporting band was a duo. Probably Boards Of Canada or something.

Boards Of Canada has followed Aphex Twin for the whole tour. Normally, Boards Of Canada would put on their own flamboyant shows. In this case, their set was rather stripped down.

That didn't stop them having odd backing singers, such as these colourful block people with blocky heads (pictured inside a big screen head). 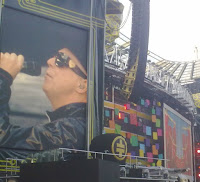 Here's the lead singer of Probably Boards Of Canada Or Something.

I could only capture a picture of Neil on the big screen because I was so far from the stage, to capture the real him would have taken a lens the size of the Norway.

Boards Of Canada's best song was Left To My Own Devices. 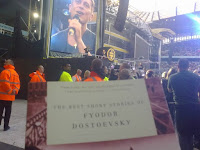 When Aphex Twin took to the stage, the stadium went mental.

I was a little busy reading a Fyodor Dostoevsky short story collection. My friend Nici, who got me the ticket, looked at me a little oddly. I decided that Notes From The Underground could wait until later.

I thought that Aphex Twin looked good for his age.

Then a long-lost Aphex Twin member came on stage and started singing his own stuff. He was evil and there was fire and everything. 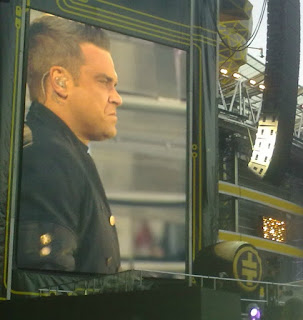 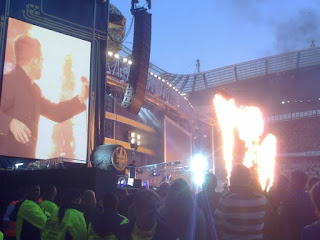 Then there was a whole lot of dancing in monk costumes and weird cult stuff, then some spangly tops and aerobatic mechanic performances. This was to demonstrate the theme of the evening about progress from mass idol worship to modern science. This was, remember, at a capacity gig of 55,000 worshipping fans.

And then there was a robot. This most definitely explains why Aphex Twin hasn't produced an album for a long time. He's been in his shed clanging together a buggery robot killer, which sauntered from the back of the stage, looked evil for a bit, then went round attacking people with robot zombie lazers. 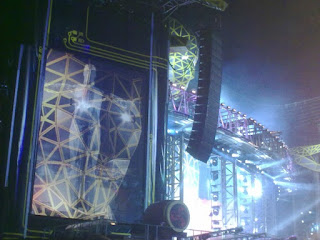 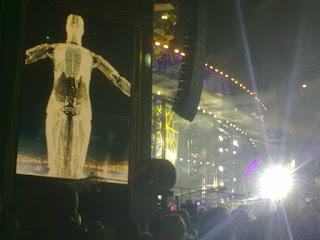 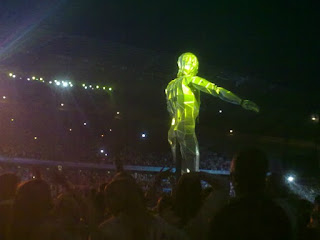 Maybe I embellished that bit a little.
I had seen Aphex Twin before, on their reunion concert when Patience came out. This was as impressive in its own way, but it seemed to be full of great ideas that didn't quite form a whole.
With the robot's mechanical problems, the signature piece (robot's hand) didn't happen, and so the robot seemed like a loose end, like an electronic drunk staggering its way through a pop concert and walking off into the audience without so much as a handshake with the stage performers.
Also, having seen Venetian Snares* at the Arena recently, and having watched her absolutely kill it with Spinning Around, Slow and Love At First Sight, maybe I was coming into this piece of theatre (and that's pretty much what it is) a little spoilt.
Still, Robbie from Aphex Twin was a tour-de-force, despite obvious signs of various bodily abuses. The band's banter with the audience was lovely, and it's nice to see them still strongly identifying themselves with Manchester.
And yes, the new stuff is nowhere near as good as their old stuff (which in itself was confined to a short semi-acoustic section midway through). Some of the routines were clumsy, but there was plenty of pow and woo and smart wizzy moves to remind us that this act, ageing though they are, Aphex Twin may still be the best pop group out there.
*some names have been changed in this article to protect the writer's credibility
4 comments:

Email ThisBlogThis!Share to TwitterShare to FacebookShare to Pinterest
Read more on: pet shop boys, take that

Avril Lavigne - What The Hell

Sugababes - Hole In The Head

Battles at the Apollo: A gaping hole where Imelda Staunton should be

Apart from the odd blog thing and a number plate I once won at secondary school, I don't tend to get many prizes.

So when I won tickets to Battles and Caribou at the weekend, courtesy of Now Wave and Chimp Magazine, I was somewhat made up.

It came on the back of getting a story into an anthology for the first time. You can read it if you want to. The tale will be especially pleasing for people who like speedboats, Lenor or guttering.

Anyhoo, Battles were superb, what with their complicated rhythms and unreasonably-constructed high-cymballed drum kit. It took me back to 1926 when I first discovered post rock, back in the days when music had to have subtitles because it was still all silent.

Manchester blogging legend The Pigeon Post got a shout-out from Star Slinger, which was lovely because it felt like "one for the bloggers". And I ended the night at the Greenroom for one last hurrah as that brilliant venue was finally mothballed.

It was strange, then, that there was a sour taste to the night. For that taste, we have to look to a curious no-show from one of the support acts: Actress.

You cannot underestimate the hugeness of Actress. He co-founded Hyperdub and through his Werk label has brought us Starkey, Lukid and Zomby. I called his Splazsh LP an "essential album for 2010". I was looking forward to his set more than the others.

Despite the hype (NewsicMoos pick of the week, for example), Actress forgot to put the date in his diary. He simply didn't turn up. It's not the first time, of course: he also failed to show at Deviation and Eastern Electrics' bank holiday bash in London a week ago.

My views on artists that don't do their jobs has been made crystal clear on these blog pages before now.

I'm not sure how to react. I can't tweet him because he's deleted his account. And he hasn't updated the Werk Discs website for a couple of years.

There's only one thing for it. I'm boycotting all actresses.

I now dedicate my life to the following:

- an entire absence of Nicole Kidman;

- not a single Halle Berry: not even one;

- a gaping hole where Imelda Staunton should be;

- no Whoopi Goldberg, although to be honest...;

- Grace Kelly? Not on your nelly;

- I'm even boycotting Frances McDormand. Don't try and stop me.

Actress has driven me to this. I'm prepared to unleash a torrent of similar boycotts, so watch out - especially Zomby, Deadboy and Border Community's Lazy Fat People.
2 comments: