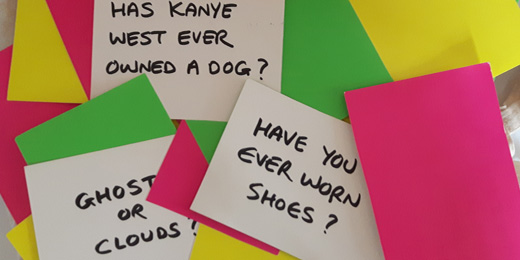 My podcast listeners have been camped outside Fats Towers waiting for a new episode for weeks. Igloo tents, marquees, bivouacs, the whole works.

I've been concentrating on having a new job instead. I will get back to Hey Fat Roland podcasting soon, honest.

In the meantime, here is a modest selection of what modern people call "bloopers" but what I call "bits I scraped from the floor of the editing studio that my pet iguana missed when hoovering up because it lied on its CV about its ability to operate household machinery". 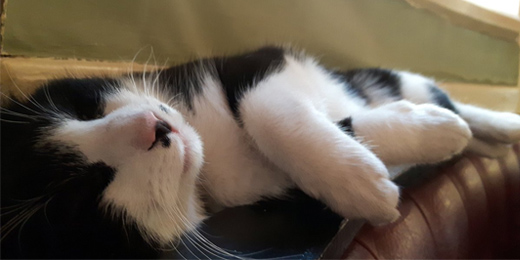 In a Salford pub yesterday, as I leant against a snoozing cat (pictured), I was reminiscing about the moment I discovered the full beauty of drum 'n' bass.

It was at Tribal Gathering in a tent dense with dry ice. It was like walking into a shisha pipe, only with a sillhouette of an MC rising out of the cloud. I'd got a load of vinyl, but it was the first time I'd seen "liquid beats" (ugh) in a live setting.

Here's a remix of LTJ Bukem's classic track Music. It's just a clip (full version here), but this is the kind of loveliness I walked into.

For those not used to this kind of drum 'n' bass, you need to get over the busy-ness of the beat. It is, after all, running at 175BPM which is enough to leave your rattled bones scattered over the dancefloor. Let the loop become one. And then lose yourself in the chords swirling around the centre.

Despite the likes of Rudimental hooking up with Ed Sheeran to bring a clunkier - yet still entertaining - form of this music to the Hozier generation, the genre has stayed pleasantly underground. Yeah, there was that Olive track a generation ago, and that woman totally addicted to bass. But really...

But the smoky, airy Bukem stuff remains fairly pure. And, when done well, absolutely one of the most liberating styles of music alongside acid house.

A particular favourite of mine was Big Bud. a regular on Progression Sessions and someone whose sound seemed to cut a little deeper. Listen to High Times below.

I like cats. I like drum 'n' bass. Maybe there's a corrolation between the weed-hazed jungle ambience and a domesticated jungle cat that sleeps 22 hours a day.

Maybe this, and exactly this, is what cats hear in their head all the time. 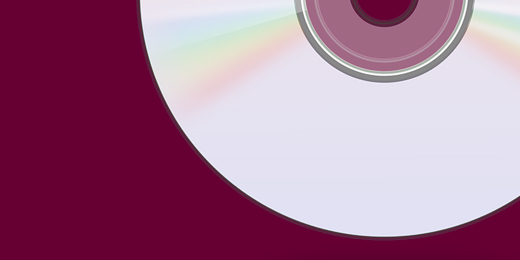 It's 2016. We have flying cars and chutes that feed us breakfast. Money is made of gas. We are so in the future, it's ridiculous.

Why then, dear reader, does the current album chart look like this? 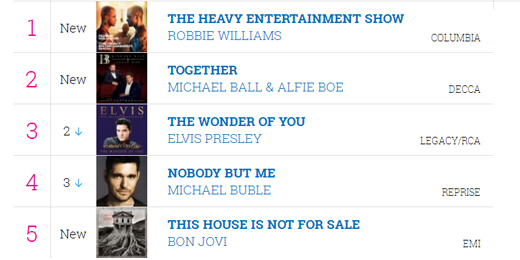 They aren't even the most successful Michaels. They're eclipsed by Jackson and George. But it's not that which riles me.

It's 2016, not 1927. These five folks date back to the time we used pagers for social reasons. Back to the time dial-up internet meant you had to write to Readers Digest to request your ration of bytes. Back when we brushed our teeth with chimney sweep brushes. If you could afford teeth.

Alright, old fogeys probably sell better in the lead-up to Christmas. No record company's going to risk losing the next new thing in the swamp of seasonal sales. I bet the best-selling things in pound shops right now are carriage clocks, denture glue and snuff.

But there's definitely a domination of physical product here. Boil the chart down to just streams, and instead the top five is Drake, James Arthur, Justin Biebpipe, Ed Sheeran and Kanye. Much fresher blood. So what we're seeing in the current album chart are strong old-school Adele-style sales of supermarket CDs.

In short, streaming is dead, old people are alive, and Michael Buble is definitely not the most successful Michael in town.

I wish the chutes thing was true. 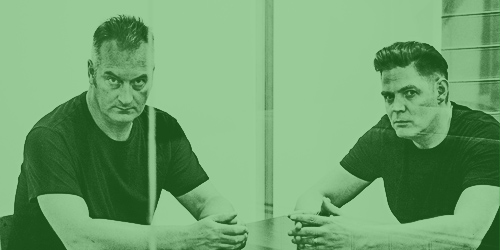 You when Limmy asks where the "slam tent" is? Like this?


Those south of Hadrian's Wall may not know that the Slam Tent is indeed a real thing at T In The Park. An actual tent. With, er, slamminess in. Here's a video announcing some of its techno delights earlier this year.

The curators of the Slam Tent are uber-chief-mega techno legends Slam, whose label Soma can partly be credited for the early success of Daft Punk. (They were the first people to put out Da Funk on 12", which was then picked up by the Chemical Brothers before Virgin Records swooped in and made it a hit single.)

Glasgow duo Slam are still going strong. Machine Cut Noise is their latest album and I'm pleased to say it hits like a boxer and stings like a butterfly with bees sellotaped on. My favourite track is Viginti Quinque, which is Latinate nod to the age of the Soma label. Here's an excerpt, a word which, incidentally, is from the Latin "to pluck":

Just beautiful. But you want longer stuff than that, don't you? Here's the unrelenting Psalm, a word which is co-incidentally from the Greek "to pluck".

Why am I talking linguistics? I blame Arrival.

Psalm is a little basic in melodic themes but pretty much sets you up for the album. In the Soundcloud comments, someone uses the phrase "fanny baws". Ah Glasgow.

What's it going to be then, eh? 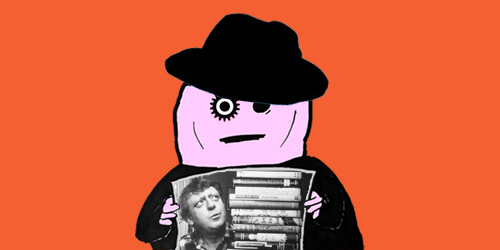 Where's my blog been at this past eight days?

Was it shoved into a drawer with all my socks and undies and false moustaches? Did it fall down the back of my sofa along with all the spare change, remote controls and baked beans?

If you must know, I've been making a few life changes. Instead of being a full-time bookseller, I now run events at the International Anthony Burgess Foundation, a live venue and archive dedicated to the Manchester author of Clockwork Orange - and 32 other novels.

It's amazing, really. I'd been looking for an opportunity to cut down my hours, then this came along. A Manchester theme - tick. A booky theme - tick. Event wrangling - tick. Operations twaddling - tick. Part-time to allow for further creative gubbins - tick. And although my task is to look beyond Burgess's most famous book, it also helps that Clockwork Orange is my favourite novel.

I've thoroughly enjoyed my first week. It does mean that blogging and podcasting has been relegated to the back benches while I try and give my A-game at the start of a new job. Yeah, all my metaphors will be based on American sports from now on.

I should be able to rediscover a balance this next week. Blogging will be back on track. The podcast will rise again from its audio silence.

I really shouldn't spill baked beans down the back of my furniture.

Common's new single Black America Again is a doozer. The fat piano, those strings, the scratching, the James Brown sample, the hope that bursts through with a little help of a certain Stevie Wonder.

And of course, the lyrics. "Maria Sharapova making more than Serena." The nod to Viola Davis and Ta-Nehisi Coates. The lack of black people in science fiction ("maybe you need two, and then maybe then we'll believe you").

If you want more of this, or rather this with all its elements spread out over 20 minutes, check the sprawling 'remix' video that's just come out.

Crumbs, we're messed up aren't we. Why do people even question the need for black lives to matter a heck of a lot more. Why am even typing this paragraph in 2016? Sheesh. Everyone needs Black America Again.

It's also catchy and I'm caning that repeat button.

Incidentally, here's the MC Lyte dis track that I think inspired part of this track. That's her voice at the start of Black America Again's second verse.

#SaveFabric: listen to Throwing Snow's One For The Booth

Poor November. Stuck between the behemoths of Hallowe'en and Christmas. All it can do is fire rockets at the air in a desperate ploy for attention.

I suspect I'm going to spend most of the month listening to the #SaveFabric compilation, a 111-track album coming out this week to support the campaign against the closure of London's Fabric nightclub. That's right. 111 tracks.

So far, campaigners have gathered a petition with in excess of 150,000, and Fabric have received more than £300,000 in donations to bolster their legal fight. The mega compilation, featuring the likes of µ-Ziq, Skream, Mr C, Machinedrum and Coldcut, was the brainchild of Fabric Records and their in-house label Houndstooth.

Have a listen to Throwing Snow's dancefloor stomper One For The Booth, aka track 104, which sometimes sounds like fireworks being air-gunned from a pipe. Probably. Come on, I had to link back into the November theme somehow.