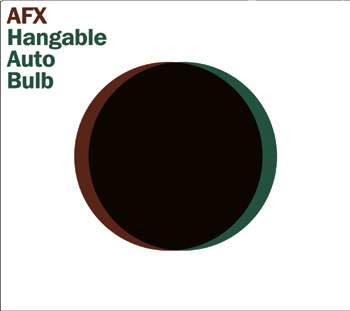 I am a blithering hypocrite and you should pap me on the nose with the back of a spoon.

I was going to excrete a post about chart-topper Rihanna making the dullest r 'n' b since R Kelly and Aaliyah. (No disrespect to the deceased, but Aaliyah's music was the very epitome of r 'n' b medocrity.)

The post would have been magnificent, and would have finally exposed r 'n' b for the drivelling middle-of-the-road dross it is.

But then, I am the sort of manchild who spends hours listening to clicks and beeps and barely distinguishable melodic themes. My music taste by nature means I can get lost in a repetitive mantra which, essentially, doesn't change for six hours. My middle road is so narrow, I have to build bridges over the cats eyes instead of going round them.

And I confess to liking some r 'n' b, no more so when I saw The Ladyboys Of Bangkok do Usher's Yeah routine at the Lowry a couple of years ago.

It does seem strange that the very week Rihanna claims this decade's record of the longest run at number one whilst simultaneously releasing her own range of umbrellas in the wettest period of UK history, the queen of r 'n' b she is hoping to depose Beyonce Knowles "falls down some stairs" in Orlando, Florida.

This could be the start of a new and startling range of cross-promotional opportunities. All sorts of records could be used to shift product. It's the kind of business acumen Tesco would kill for. No, seriously, they actually kill people. With hammers. This sounds like bad stand-up, but they do really kill people with hammers.

I have trawled the backlist of Warp Records, and sifted out some electronica albums that are desperately needing some merchandising spin-offs. Rihanna had better watch for that discarded roller skate at the top of the stairs...

>AFX's Hangable Auto Bulb (pictured): a light connected to the ceiling that is somehow turned on remotely, maybe with a switch.

>Boards Of Canada's In a Beautiful Place Out In The Country: estate agents

>Squarepusher's Budakhan Mindphone: a microchip in the shape of Chaka Khan dressed as the Buddha inserted underneath the skin in the forehead and enabled to take telephone calls.

>Squarepusher's My Red Hot Car: Ferrari dealerships. You're getting the hang of this now, aren't you?
No comments:

Reqing out* to retina.IT gets the headnod over stalking Sven Väth and Andrew Weatherall in The Orbit 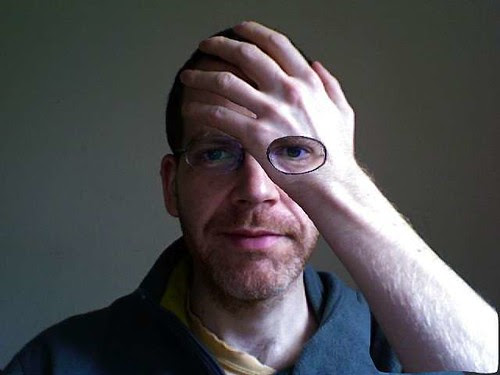 So what musics have been troubling me ears?

Let's begin with Cylob (pictured), who made his name in the 90s remixing the likes of Aphex Twin and Mike Flowers Pops, both of whom sport more hair than they deserve to. The 'lob span his first reel-to-reels in The Orbit club, Leeds, a venue which arguably spawned my Fat Roland career. I remember watching DJs Andrew Weatherall and Sven Väth with intense interest, hovering behind them like a stalker. As I left the club, I had a lucid moment when I decided, with a theatrical flourish, that yes the world needed my DJing skills. (It didn't, but I went into DJing anyway.)

Cylob's new track Rock The Trojan Fader isn't as immediate as his lovable classic Cut The Midrange Drop The Bass, but it has the same playfulness and eccentricity. Vocoded voices dance up and down analogue keyboards while everything else collapses into a heap of flurried beats.

It bodes well for new album Trojan Fader Style, which I haven't bothered to listen to yet because it's all one long track.

The moment Unkle persuaded arch-miserablist Thom Yorke to wail about rabbits and headlights, I was transfixed like a rabbit in some headlights. Yeah, neat simile, I know. Since that high point last decade, we haven't had much output from the band founded by James Lavelle and David Holmes-collaborator Tim Goldsworthy. So the new Unkle album War Stories should be a rare elixir.

It isn't. It is a decent rock album, and comparisons to Kasabian and Stone Roses are fair. The opening tune Chemistry reminds me of Puff Diddly's ridiculously entertaining Come With Me: that's not necessarily a good thing.

But the Fat Roland blog is about electronica, and when Unkle are collaborating with the likes of Josh Homme and The Cult's Ian Astbury, it just ain't gonna ring my bell.

Like former member DJ Shadow, they seem to have found a formula that works. Generally. Most of the time. Kind of. They just need to move on from trip-hop rock crossovers, which were vogue about 52 years ago.

Back to the good music. When I played retina.IT's infectious Tetsub at Manchester's TV21 bar recentlly, I was overwhelmed with a head-noddy Req moment. Anyone who's got into Req will understand me.

retina.IT have now released Semeion, a greatest hits of sorts, full of mid-tempo glitchy bleeps and distorted yet distant funk.

Their studio lies within erupting distance of Mount Vesuvius, and I wonder if they haven't got a satellite or two picking up the sinister clicks and scrapes sprinkled across this sparse, lunar album.

It's such a pleasing effort, lying somewhere between the coldness of Robin Rimbaud and the chunkiness of Clark, that I'm going to give this the head nod over Cylob and Unkle.

I'm careful about who I hyperlink to on this site. Thankfully, I got through this post without mentioning that Unkle used to record in Meatloaf's recording studio. Ah dammit, there's a link to Meatloaf. Oy, stop linking to Meatloaf. Aaw look, Blogger's gone and put a label down there too...

*yes, Reqing out. I just invented it.
No comments: 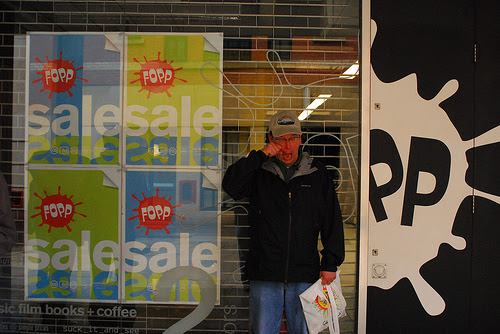 It doesn't matter that Facebook has as much power to save anything as Richard Dawkins has of becoming Archbishop of Canterbury. It's more a case of feeling utterly pessimistic about the future of the record shop.

The closure of Fopp has been covered extensively elsewhere on the internets, so in short it went something like this:

Step One. It doesn't matter how much you take through your tills; if your cash flow dries up, you're done for. A private company buys MVC from Woolworths. It cost them their cash flow. They went under.

Step Two. It doesn't matter how much you take through your tills; if your cash flow dries up, you're done for. Music Zone buys MVC. It cost them their cash flow. They went under.

Step Three. It doesn't matter how much you take through your tills; if your cash flow dries up, you're done for. Fopp buys Music Zone. It cost them their cash flow. They went under.

There's a business lesson there somewhere. Maybe you can spot it. Write your answer on a postcard and send it to HMV before they fall into the trap.

I liked Fopp. The one in Manchester had a cafe. It didn't feel cheap like Music Zone. And if my grey cells are firing on all one cylinders, the fallen Fopp stands pretty much on the burial ground of the old Piccadilly Records. I'm going back a few years here, to the days when punks used to growl at passers-by between the shop and the old sunken toilets, in which lay interesting brown treasure.

Anyhoo, let's just blame Prince and move on, shall we?

Breaking news... the Mercury Music Prize nominations have just been announced. Last year I was horrifically wrong in my predition, so for now I'm just going to list the nominations and then think about it a bit more:

August update: Fopp has reopened because HMV bought it. The postcard must have got lost in the mail.
3 comments:

Ever since spaceship Roland landed on the blogosphere two and a half years ago, I have avoided those tiresome apologetic posts which go something like this:

Suffice to say the Facebook bit is possibly true, but otherwise I have been run over by a buffalo of lethargy when I'm not dying inside on my increasingly long commutes to work. And you know when I use a strange buffalo metaphor, I must be serious.

I think I need to reassess my priorities. It seems just to be work, work, work right now, which is silly because my staff are lovely, it isn't exactly rocket science, and cool things happen most days. But I think I am falling victim to A General Malaise, which is usually a sign I am not spending enough time doing the things I really like doing, or seeing the people I really like seeing.

Jeez, this is turning into the Big Brother diary room. On the positive side, I am playing a one hour DJ set in Cheltenham in August, I will be presenting several shows on Greenbelt FM, and as a third string to my crossbow, I have spent some time recently writing funny things in a wild and wacky notion that I would quite like to try out a bit of stand-up comedy.

That last idea is based on the notion that (a) I am essentially an egotist and a show-off; (b) I get a huge kick out of making people laugh; (c) my imagination tends to run riot and I have spent the last year capturing it all in notebooks; (d) sometimes when I see a stand-up comic, I think I can do better, which brings us full circle to (a).

Email ThisBlogThis!Share to TwitterShare to FacebookShare to Pinterest
Read more on: video, whimsy

The truly European Puzzleweasel is the latest subject of my occasional free mp3 series, mpSunday.

Just a couple of days ago, I enthused about this artist by using clumsy shredder and typewriter similes. Now it's time for you to feast your ears on Puzzleweasel proper.

Peter Dahlgren is a native of Switzerland, Sweden and Holland, depending on which slice of his life you look at, and he now he lives in Denmark surrounded by bacon. He's always been a bit of a raver, but his music is a kind of un-rave.

It is the anti-rave:

PTAAANG! This mp3 is no longer available. Click here for the latest mpSunday.
No comments: