Purple tins and Co-op: where the hell is Fat Roland?

The time has finally come to nudge me off my bloggy throne back into the pits of well-deserved obscurity, for the Manchester Blog Awards are now open for nominations.

Last year's accolade, in which I shared a couple of gongs alongside some truly smashing blogs, astronauted me scream-first into the spaceosphere: people suddenly wanted me to *do* stuff. I'. sure, once I can no longer call myself "blogger of the year", it'll be back to the purple tins and sitting outside the Co-op.

But I have been busy. For example, I will perform my umpteenth fiction reading at Manchester's leading literary shindig Bad Language this Wednesday, August 31st. I'm hugely grateful for Bad Language's support: they have been the driving force behind my newly-discovered love of short story writing.

And don't forget the wonderfully-named Bad Shoes Festival on September 25th in Chorlton. Bad Shoes is a joint mission between Bad Language and that temple of gorgeousness, Shoestring Magazine. At the festival, I'll join the Flashtag Writers for a fiction reading of sorts. Ah, the Flashtag gang. It seems like an eternity since we congealed our efforts around this stupendously stupid blog post last November.

Oh, that reminds me. We're doing a book. We're doing a disgusting book of smutty stories for Didsbury Arts Festival. Quickes: Stories For Adults in in the editing / typesetting phase and features work by us, by specially commissioned writers and by general submissions. We're going to launch it on September 28th, and it would be great if you could come-- er-- be there.

What else? I'm bound to miss something. I've resurrected by photograph microfiction thingy blog Fatotograf. Me and a few Sanctus 1 chums will be giving out fish this weekend in a new short story experiment. I ran a fun blog workshop for Full Circle Arts and Blank Media. My coming out story is the subject of an Art With Heat project for Manchester Pride (yes, I'm in that video!). You can find me DJing on Saturday and Monday nights at the Greenbelt Arts Festival. There's stuff going on with Manchester Science Festival, but it's not quite announceable yet. And I am currently uploading a few 100-character stories over at Italic Eyeball.

Oh and to take my mind off all of the above, I just wrote this. Like I said. Astronaut. Screams. Spaceosphere.

I had been chiselling out a blog post about the Sony DADC warehouse fire that claimed the stock of scores of independent record labels in the UK, including Warp Records.

Today, Warp issued a statement on how the fire, caused by the London riots, had affected them. It was not good news.

"All of Warp's UK stock appears to have been lost in the fire," say Warp.

"The Sony DADC warehouse also acted as our international distribution hub and so this has affected our ability to supply our overseas partners."

They go on to state that forthcoming released by Grizzly Bear offshoot CANT (as obtuse a name as !!!), uber knob-twonk Rustie and techno veterans Plaid will go ahead, but that funtime high-cymballed beat combo Battles may have to cope with a digital-only version of their next single My Machines.

Label Love is a campaign to raise cash for the many labels affected by the blaze. There is one event already scheduled, and I hope Manchester can organise something similar. PIAS, who sub-contract the warehouse, have also teamed up with the Association of Independent Music to support those affected.

But the worry is not just financial.

"The biggest challenge for us," continues the statement, "is replacing Warp's extensive back catalogue spanning the last 21 years. We will replace as much of this as we can by creating new stock and replenishing where possible with stock from outside the UK. Unfortunately some releases may never be available physically again."

"We will be closely supporting PIAS in their efforts to get the independent music community up and running as quickly as they can."

There's not much else to say. My planned blog post, full of theoretical blatherings about the wider affect of the fire and the riots, has been thrown into the bin. All that remains is a deep sadness for Warp Records and the effect of this incident on the legacy that has fed this blog for years.

Not just Warp, either, of course. A full list of labels follows in small print.

All that, before we even get to the human tragedy of the stupid, stupid riots. What a sad few days.

"Short of performing a skiffle set on the grass, we were going to have to pull the show." 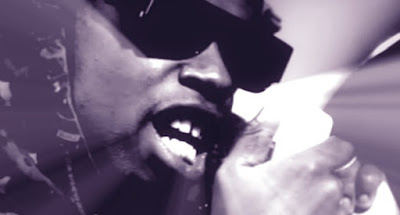 Edit: the following attack has been resolved and Murkage's original post has been taken down.

I still think this is a fascinating attack on a festival by a band, and so don't intend to remove this blog post. However, a clarification was posted in the comments by Anonymous (thank you, Anonymous). The text of this follows.

To respect the SEO aspect of this blog post, I have edited out the name of the guy Murkage wrote about. His name has been blanked from my blog post and from Anonymous's response (which is also why I've had to delete Anonymous's comment).

It should be pointed out that Murkage retained respect for Cloud 9 throughout all of this and there is no question that Cloud 9 clearly rocks. They just had a problem with one person.


Anonymous's comment: "____  ____ issued a public apology to Murkage for any upset that he caused.

"Just to clarify Hannah Cox is the promoter for Cloud 9 Festival and the band were dealt with by her in a professional manner throughout the event as they pointed out on their post. Following a series of emails between Hannah and the Artist this blog post was taken down. While I would decline to further comment on the contents of the article it should be made clear that ____  ____ as a volunteer for Cloud 9 was in no way responsible for Murkage not performing at Cloud 9 this year.

"'Journalism is popular, but it is popular mainly as fiction. Life is one world, and life seen in the newspapers is another.'
Gilbert K. Chesterton"


Being a promoter must be the worst job in the world. Worse than working in sewers or being a bomb disposal officer or doing Cher Lloyd's PR.

When Manchester DJ and production crew Murkage (pictured) turned up at Cheshire's Cloud 9 festival, it seems the stage set-up wasn't to their requirements. They pulled out. And that would be the end of the story. Annoyed band, peeved promoter, life goes on.

The Murkage cartel launched an astonishing assault on the artist booker of the Cloud 9 festival after the stage mess-up, calling him a moron, rude and, um, unable to think beyond his genitals.

But it makes for brilliant reading. It's worth taking in the whole thing, mainly because I never knew there was a spirit called Jeremiah Weed, but here are some edited highlights:


"The organisers had tried to put us in a tent which didn't have an actual stage. If you've seen us live before you'll know our show is made up of four vocalists, a DJ and sometimes a drummer. We're still baffled as to how they thought this was going to work...

"We realised that short of performing a skiffle set on the grass, we were going to have to pull the show...

"We would also like to take this opportunity to name a guy called ____  ____ as one of the rudest, most unprofessional, misplaced egos we have ever come across since we started doing music... "


"Sorting out the staging issue would have take approximately ten minutes maximum... we can only assume that ____  ____ simply didn't want us to play the festival for his own reasons..."


"When did it start being ok for absolute morons to make decisions on anything at all..."


Egoistes like that dude should stick to being professionally cool, taking drugs and generally being part of the scene furniture, leave running festivals to the grown ups please...

"The inability to think beyond the end of ones penis should remain a barrier to entry when it comes to running festivals no matter how small in scale and, it's [bleeped out: probably libellous] like ____  ____ who give promoters a bad name..."

Except it's not gold, is it?

Whoever was to blame, it seems we have players in Manchester's music scene with teeth drawn and no intention to back down.

When Manchester starts biting itself, all you get are rotting chunks of flesh instead of a dancing, thriving scene. I hope this ____  ____ fella can patch things up with Murkage, I really do. Because Murkage's parting shot does not bode well:


"If we have learned anything over the years its this; piss on artists when they are on the way up and they will shit on you from on high." 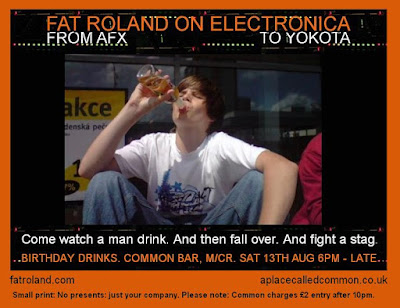 Ten reasons why my forthcoming birthday will rock harder than a stone that has detached itself from the rest of the ground around it:

1. It means I will now be older than Michael Hutchence.

2. Time waits for no man. Many a mickle makes a muckle. Them's the breaks.

3. If you slice me open and count my rings, my innards display something resembling either Jesus Christ, Osama Bin Laden or Cheryl Cole.

4. I have been teetotal for four and a half months. My birthday is when I start drinking again. This alone will give people reason to be entertained on the night.

5. If you add my birth year to this year's date then subtract the two central numbers from the squares of themselves, you unlock the code that opens up the Indian burial ground hidden beneath this blog.

6. This year, Woody Allen will be only twice as old as me. Coincidentally, I am half as Jewish and four times funnier than him.*

7. It is one step closer to completing my plan for world domination, if by "rapid deterioration of basic cognitive functions" means "world domination".

8. This time last year I was somewhat ill, having had my innards scooped out by the NHS and sold at Christies. This year, I am stronger, faster, pussycat, kill kill.

My birthday drinks will happen at Common Bar in Manchester on the evening of Saturday August 13th. Friends and followers of this blog are welcome to come along.

Here's a bigger version of that pic, above.