I am having a constructive conversation on Youtube about the KLF

Click here (or the picture) to make this bigger so you can read it with your eyeholes. And naturally, I'll keep you updated on the discussion in the comments below this here post. 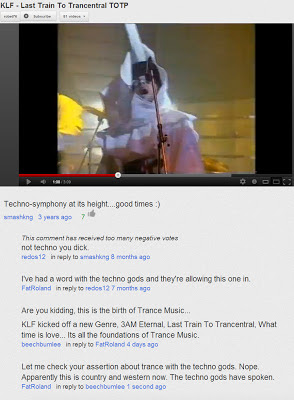 Further Fats: This is not a brave new world: it's just another house group
No comments:

Email ThisBlogThis!Share to TwitterShare to FacebookShare to Pinterest
Read more on: klf, teh internets

Rihanna has ruined everything

Rihanna's latest single is the death of creativity.

That's it. It's over. Unplug your guitar. Put down your paintbrush. Leave that ice sculpture for the sun. Rihanna has ruined everything.

It's bad enough that the X Factor bursts with so many brands (the contestants' phones, Syco, the hotel they stay in, more Syco, even the cups on the desk in the US version) that there's barely space for the soundwaves what with all that money flying about.

But now Rihanna has released an advert and it's got to number one. An advert.

I'm not naive. I'm used to Levi jeans once belting up the the charts and Mr Latest Bling Bling Hippety-hop getting jiggy with cars and expensive fizz, but the Rihanna thing is quite unbelievable. Let me explain.

A few years ago, Emporio Armani launched a fragrance called Diamonds. Cue a launch party with Beyonce, Josh Hartnett getting his nips out in black and white commercials. and a forthcoming tie-in with MTV.

Diamonds is, according to its maker's website, "inspired by both the past and the present, the traditional and the modern". Such unique selling points are "particularly reflected by the ingredients". Better the actual 'ingredients' than, say, the bottle coming with a buffalo that constantly points at a watch as it screams "don't think about the future, NEVER THINK ABOUT THE FUTURE" in Buffalese.

Meanwhile, in another corner of the empire, Rihanna designs things for Armani: bags, pants, jeans, that kind of thing. It's an odd profession for someone who wears so little of anything, but she will earn a universeful of cash as did her preceding shill Posh Spice.

So I can only imagine the writing process with Rihanna's latest single (no, I'm not calling her RiRi: she's not a panda), because she really has jumped the shark, punched the buffalo and bashed the bishop on this one.

THE LIGHTS FLICKER. THE ROOM GETS COLD. ARMANI FLOATS INTO THE ROOM.

ARMANI: Someone mention my name?

ARMANI: Get a load of this.

ARMANI SPRAYS THE DIAMONDS FRAGRANCE INTO RIHANNA'S FACE. HER EYES GLAZE OVER. MEANWHILE, THE PRODUCER RUNS SCREAMING FROM THE BUILDING. HE RETIRES FROM WORKING IN STUDIOS, ALTHOUGH IN 2019 IS SPOTTED IN AN EARLY X FACTOR AUDITION DRESSED AS A BAD LEO SAYER.

"Shine bright like a diamond" it is. And that, dear reader, is how Rihanna's new single Diamonds came to be named after her employer's fragrance Diamonds, with both snuggled so close on this screenshot on the Official Charts Page (below), they could mate and give birth to, um, a parallelogram.

Well done, Rihanna. More than anyone in the history of the charts, you've reduced the number one spot to a commercial. Let's hope you do the same when you're saggy and old and advertising Farmfoods. 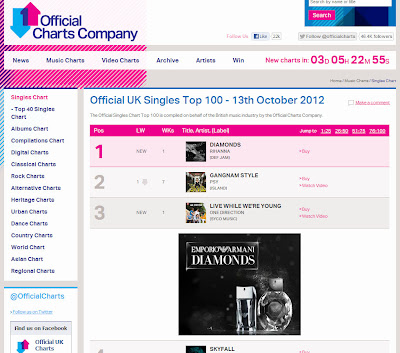 Further Fats: Rihanna will knock out a cover version of Hangable Auto Bulb as soon as she claps her eyes on this pile of blog waffle (2007)
5 comments:

Email ThisBlogThis!Share to TwitterShare to FacebookShare to Pinterest
Read more on: rihanna

I worry that I don't blog about music enough, so I scribble resolutions to myself to try harder. And then I get distracted by the Labour party conference and the resolutions flutter into my recycling bin.

I like to think of Labour as my natural party of choice. I was born in the great industrial city of Manchester, and my childhood memories include the smell of bike oil and dad coming back from t'pit at t'weekends. Okay, I liked about t'pit and t'weekends. But I was into T'Pau for a bit.

Actually, I haven't voted for Labour in a general election for 20 years. Tony Blair put me off: too blue. I felt he sent old Labour drifting down the river like Phil Silvers in It's A Mad Mad Mad Mad World with Tony Benn as the solitary floating hat reminding us of a once great party.

Still, that didn't stop me spending half of this week at their conference venue setting up a bookshop. And because it can be hard work and because a lot of people I meet might be quite bonkers, and because the set-up has done my back in a bit and I'm in a bad mood, you're going to get the brunt of my Labour conference experience in the shape of a few roughly-honed blog posts.

Let's start gently because it's early days. Here are some photos from set-up, Watch this blog for more updates in the coming days when things, y'know, actually get interesting. 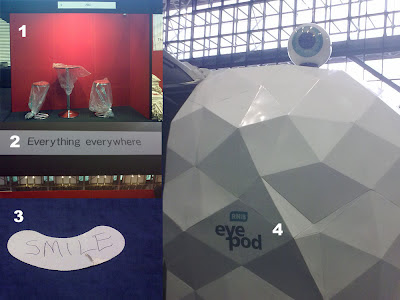 1. We all get little stands like this. Our bookshop, which you'll see in later blog posts, takes up several of these little stands.

2. There is a stand called Everything Everywhere. There was nothing in it when I took this photo. Perhaps it's irony. Do politicians do irony?

3. Some nice person had left a bit of paper on their stall. It says SMILE. I wonder if it's the bank. Or maybe it's a dentist thing and they're going to fashion their stand into a gaping, toothless mouth for children to play in, complete with real saliva.

4. The RNIB wheeled in their Eye Pod on Wednesday. There are two eyes, not quite aligned. I think the inside will be full of massive eyeballs - like a ballpit, only horrible. 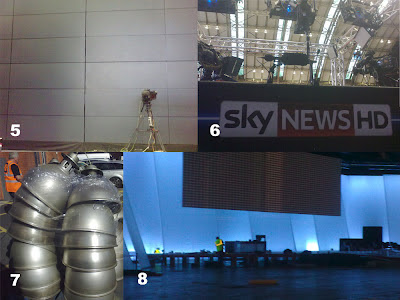 5. This is a camera. On the other side of this wall is the room in which all the speeches are made. There tend to be camera people lurking, hoping for that crucial shot of Ed Balls belly dancing or of John Prescott mainlining pork pie jelly.

6. Sky News are here. Last time I saw their conference stand, it had Boris Johnson in it. Not at the Labour conference, I hasten to add.

8. This is the main speeches room under construction. The big, dark rectangle is a video screen on which they will display a permanently rotating head of Neil Kinnock as he rabbits on about the soil in his garden and how his Ocado delivery was late this week. 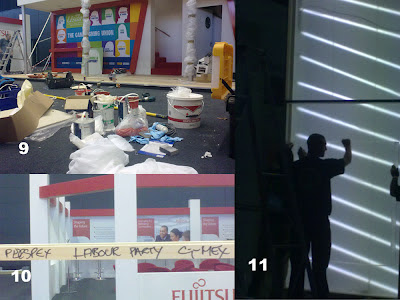 9. A messy set-up for the union chaps. They do have more red paint than any other colour.

10. "Perspex Labour Party G-Mex." This was a piece of wood raised to head height with no perspex in sight. I think it's a puzzle to be solved, like the Da Vinci Code.

11. Marks and Spencer have built an entire shop in the middle of the venue. This is a man pointing at a light and saying it's a light and his friends are saying yes it's a light, we can all agree on that.

Further Fats: In the belly of the beast - a week in Tory politics
1 comment: