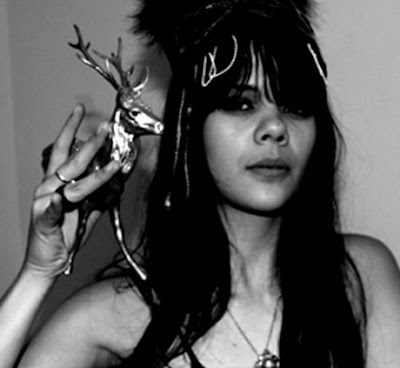 Despite my recent nigglings at this year's Mercury Music Prize, I still feel the need to tip a winner.

Last year, my bet for Burial got given a hefty Elbow, although my Klaxons tip in 2007 came wonderfully true.

So here's who I'm putting a dime on this year. Bat For Lashes sounds like Suzanne Vega riding a pretty horse which has the face of Kate Bush. This alone is enough to win the Mercury.

BFL's music is indebted to the 80s, but not in as a denim-tearingly obvious way as La Bloody Roux. Who, incidentally, needs to give her keyboards back to Erasure so when I break into their studio, I have something to pummel them with.

Seriously. Vince and Andy should have given up existing 22 years ago, when they were still truly different and interesting.

La Bloody Roux, for that matter, should also have stopped existing 22 years ago. And she's only 21. When Mr La Roux and Mrs La Roux got jiggy in their south London bedsit in order to create a musically and mentally deranged Alison Moyet, someone should have thrown a great big bucket of cold water over them. Then recorded the startled screams. And sold that recording 22 years later on the basis of, yes, this still sounds better than anything that little dampened La Roux sperm would ever have created in its lifetime.

I suspect Kasabian will be the favourite, although the Mercury's been quite blokey for the last few years and they probably need to tick the chick box in '09. Very cynical I know, but you don't come to this blog because it reads like Hello!, do you?

She deserves it more than the others, though. Who do you tip for the Mercury?

It's not how many notes you have: it's what you do with them

I spotted this on Richard Holden's thoroughly readable blog (link now broken). Howard Goodall is an award-winning composer and the writer of the 2point4 Children theme tune.

Here, he talks about how music boils down to some pretty useful basics.

If you understand music theory, it's a bit like teaching your grand piano player to suck an egg shaker.

I'm also not sure how this relates to difficult electronic compositions consisting entirely of clicks, wailing cats and exploding vegetables. But I was brought up playing classical piano, so I like this kind of thing. 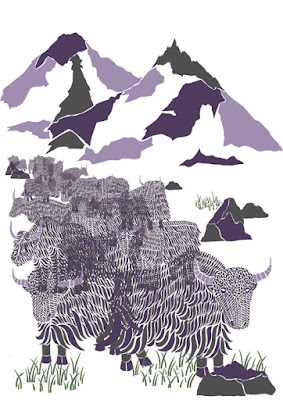 Risil's album Non Meters (pictured) is the only album in the world* that can only be described with a four syllable word: polyrhythmic.

It's a collaboration between (pay attention now) Prefuse 73's Guillermo Herren, Hella's Zach Hill, Battles' Tyondai Braxton (no, not the hit singer of Unbreak My Heart), Tortoise's John McEntire... oh and blah blah blah, about a thousand other people.

With such talent on display, and with a band name sounding like it was dream up by Snoop Dogg, you'd expect more than just expansive, lurching psychedelia that doesn't quite gel.

There Has To Be is the soundtrack to half my nightmares, and the frenetic drumming on Zantra is most pleasing. But, Risil is not the shizzle.

Speaking of Snoop Dogg, you know Dogg After Dark? The programme where Calvin Broadus Jr gets it aaawwwn with bee-yatches, young hippety-bling superstars and besuited gangsters? That's my house every night.

Or the hop hop.

Or the television coverage and numerous producers giving it the sheen of credibility, when in fact it's just a West Coast version of The Word.

*there may be one or two others. 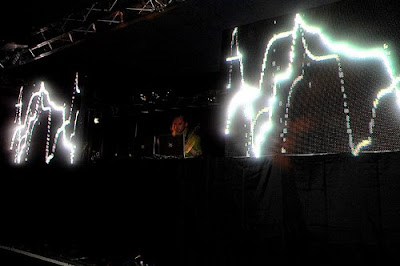 For electronica fans, it represents a brilliant metaphor for the Mercury Music Prize: an insignificant dot backed up by a glowing past that is more distant than you think.

When the Mercury showered Primal Scream with £20,000 for such a far-out album as Screamadelica, beating U2, Simply Red and Young Disciples, it was a kick in the Brit Awards' union jack pants. That was in 1992, remember, when 20 grand was worth about a billion quid..

The kudos reverbarated through the years with Portishead and Roni Size reaching equally dizzy heights. And that's despite the Mercury trying to derail everything by choosing M People in 1994.

I'm not saying this year's list sucks. I've filed Bat For Lashes, Glasvegas or (yawn) Friendly Fires into a big box labelled "shrug", but I'm sure they deserve their success. You may well argue this in the comments section.

But where's the electronica? We've been thrown a brace of bones with Underworld (although never with the ultimate techno album band Orbital), but there's something fundamentally wrong.

In a great piece for Bleep43, Toby Frith searches for any Mercury nods for Warp Records ("the UK’s most important label") and fails. You could make a similar argument for Leaf.

Firth argues it's because electronica immerses itself in singles and live appearances, rather than albums. He's right (think of Windowlicker), but the exclusion from this year's nominations of Squarepusher's Just A Souvenir is criminal.

It's more because of the man rather than the album. The Square one (photo, above, from Bangface) became the darling of the serious press last autumn; if any electronica artist was going to be the Mercury's first true IDM nomination, it was going to be him.

Except it wasn't. Inside that little dot of a prize, there so many are guitars, guitars, guitars, there's little room for a 303. And, as non-nominated Fatboy Slim will tell you, everybody needs a 303.

Maybe we live on a different planet, in a different solar system with Aphex Twin's grinning face where the sun should be. And maybe, therefore, we need our own Music Prize that respects a wickedly neglected genre.

In true Beastie style, King Ad-Rock thanks MCA for the opportunity to free up some spare time. Nice.

Email ThisBlogThis!Share to TwitterShare to FacebookShare to Pinterest
Read more on: beastie boys 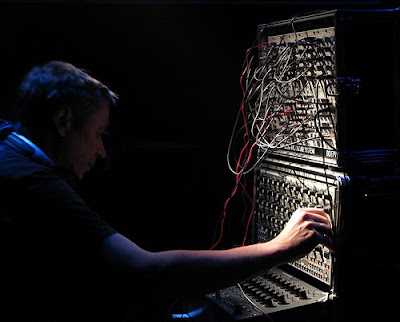 Topping the downloads list on electronic music's answer to the Arndale Centre, Bleep dot com, is Clark's Totems Flare album. I've got it cranked to the gills as I type; it's a brilliant analogue wig out designed as much for the tootsies as for the cranial glue.

The second most downloaded album is a debut LP from Bibio. Ambivalence Avenue has been covered here before: click the Bibio link at the bottom of this article. Bleep says it's like a lost 70s folk record.

Here is the rest of the top ten on Bleep:

6. Battles - Mirrored. An old one but a classic, described by Pitchfork with this trio of scintillating sentences: "Marc Bolan is dead. But Battles can rebuild him. They have the technology."

7. Diamond Watch Wrists - Ice Capped At Both Ends. This is Prefuse 73 stretching out his legs and playing footsie with a percussionist.

9. Bizzy B - Retrospective. A look back at the best of the master of the Amen break. No Bizzy B, no Venetian Snares.

10. Moritz Von Oswald Trio (pictured, photo from Stink Finger) - Vertical Ascent. I don't know too much about this, although I think it's got something to do with AGF.

Damn, this Clark album I'm listening to is good. It's like old Aphex Twin a million years into the future. Meanwhile, the top ten on Bleep has already changed while I've been typing this. Please scrub out this post. You'll find a permanent marker pen under your chair. 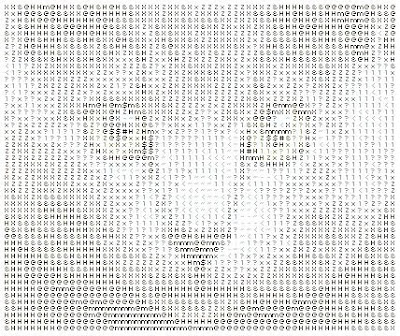 Do you know the worst thing about not having a computer?
I'm completely missing everything that's happening in Manchester. I missed It Felt Like A Kiss. I missed Kraftwerk. I am a technological pariah crawling street gutters, sucking heavily on car exhausts in the vague hope that one of them is an internet tube.

My phone internet is rubbish. No video. No music (it's all on my dead computer). Just ASCII renderings of cat pictures. Seriously. That's all it can cope with.

The library internet is rubbish. I'm surrounded by homeless junkies googling Wilmslow property prices whilst simultaneously shouting at children they probably just stole off the street.

Work internet is rubbish. It's more filtered than a Josh Wink record.

My week without a computer is turning into a month. When the delivery man arrives with my new kit on Tuesday, I will probably hump him. And then he'll drop my computer. And I'll have to wait another month having to do horrific real things like listen to radio, go outside into the sunshine and... shudder... speak to real people.

Real people! The horror of it all. Don't you know who I am?! *sobs*
No comments:

I'm still in computer no-mans'-land, but that won't stop me telling you how to run your record collection.

You have to buy the following releases:

1. I know I've banged on about this before, but you have to buy Clark's Totems Flare album. About a week away from touch-down, the most anticipated Warp release of the year (yes, more than Warp 20) is set to elevate Chris Clark to Aphex-levels of respect and thumping-fist-against-chestness. Breakcore goes pop. Electronica goes emo. Choose your own lazy comparison.

Oh, apart from Jega's Variance, which is probably Planet Mu's most important release this month. This slab of strokable bleepness was first leaked six years ago (Jega has released bugger all since 2000), and now rears its official head in the shape of a double CD. The first CD is more melodic, and the second CD is aimed at techno heads, with a smattering of glitch.

But really, July is all about Clark's absolutely massive Totems Flare. I'm so excited, I've even cut-and-pasted the track listing from the Warp website. See if you can work out which is my favourite track title: