Being Frank & Bobbins: celebrating the life of Chris Sievey

Being Frank: The Chris Sievey Story is out on DVD today. Do get it if you can. It's a glorious celebration of a man who was endlessly creative, gleefully eccentric and ultimately tragic. Here's the cartoon me holding the DVD for dear life.

If you're quick, you can just about catch the Frank Sidebottom Bobbins exhibition at Manchester Central Library. It closes tomorrow ("one of them Tuesdays", says the publicity). Pictured here is his actual head - he only ever had two, and this is the only one that survives.

Incidentally, and this is a total side note, I'm currently watching the Batman prequel Gotham. I've had to stop watching because the scripting is so shoddy. In the episode I've just seen, a whole bunch of people have been murdered, each one with their throats slit. It's how they connected the murders.

Twenty minutes later, someone mentions in passing that they also had crosses drawn on their forehead in blood. Mentioned in passing? What? Surely THAT would be up-front and centre much earlier on. Gah.

If only they took a Batbottom and Bobbins route instead (pictured above).

One thing about the exhibition is that there are lot of lists. Pages and pages of lists. We've all made and neglected to-do lists, but Chris Sievey made it into an artform. There's one graph-paper page of things to do, segmented into thematic sections, tonnes of to-dos each with its own little hand-drawn tick box. Not a single thing was ticked off. I relate.

Pictured above is a fun list - Frank Sidebottom's top 5 computers. I had a Spectrum 2.

Considering the record shop theme of Fat Roland: Seven Inch at the Edinburgh Fringe (SEO-friendly plug), I had to snap this highly advanced record player. One of the key themes of Being Frank is Chris Sievey's music career, as it happens - especially the moment a badly-timed strike scuppered his chance at stardom.

Incidentally, in this blog post I have very secretly hidden a photograph of me meeting Frank Sidebottom ages ago. Can you spot it?
No comments:

Email ThisBlogThis!Share to TwitterShare to FacebookShare to Pinterest
Read more on: frank sidebottom

The Pet Shop Boys and Madonna: Into The Minimal Groove 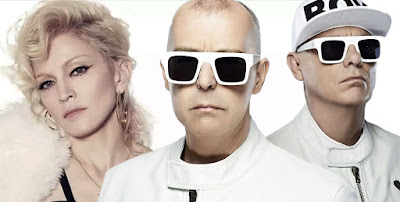 Not that I haven't got a life or anything, but I have spent many hours searching for the perfect Pet Shop Boys mashup.

You remember mashups. Songs that have been cut-and-shut together, like a Mini Metro welded to a Transit Van: totally unofficial, sometimes ugly, potential death trap.

I think I have found the perfect PSB mashup, and it comes from the bottom drawer of their back catalogue. Into The Minimal Groove mixes Minimal (Tocadisco's Sunday At Space Remix) with Madonna's Into The Groove.

Whoever did this spent a lot of time working on Madge's vocals. They work brilliantly over a track that likes to take its time: it's full of surprises.

And like my dodgy cover version of Carly Rae Jepson, they've kept the title hook until much later in the track - it's five minutes before Madonna says "get into the groove", and even then it almost passes by unnoticed. A deliberate trick to neutralise the original track to make something new and interesting.

I can't stop listening to it. You could say.... ahem... [steps closer to microphone] that I have very much got into its groove.

There's a video of sorts, which you can watch here.