Here's a new thing. I've plopped out an anthology of short fiction.

Adropiean Galactic Lego Set Blues contains 20 of my stories, including the first UK printing of a piece that was commended in the 2011 Manchester Fiction Prize. It also contains dozens of photographs and illustrations.

The idea had wandered around my noggleblock ever since James Henry self-published a children's fantasy novel and Steven Baxter mused about a monkey. Then Bad Language asked if I had anything to sell at their Manchester Independent Book Market stall and I turned myself into a one-man publishing house.

It does mean I've spent the last million days hiding from this blog so I can make sure all the pages are made of paper and not of penguins, and that the text is made of letters and not of lycra.

I haven't gone through a self-publishing service nor a proper publisher: it's all my own work, my own money, my own imprint - even though a small publisher did offer to publish it for me (thank you kind publisher, you know who you are!).

And messy work it was too: I had pages and pages of scribbled and half-scribbled illustrations, some of which you can see in the picture below. Apart from the cover to Quickies, I'm not exactly known as an illustrator, so I feel quite nervous about having my pencil scribblings out there.

The Manchester writing scene is full of people pimping their anthologies: many of the books are excellent. I hope mine furrows its own wrinkle among the others. Adropiean is, hopefully, dark and funny, bemusing and absurd, a little adult and a little childish.

I think it would be a nice thing to own. You can order it through my fiction writing site Italic Eyeball.

You never know. I may well get back to writing about Squarepusher and Autechre and James Blunt soon....

Tsssch. New things. They get in the way sometimes. 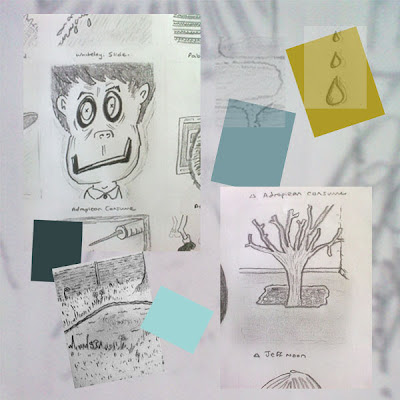 All of our pop stars are dying 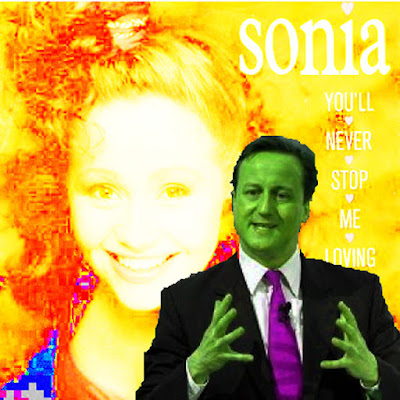 Death, O where is thy Sting? He's out the back playing a zither. (I Corinthians ch15 v55)

It's bewildering and terrible how many celebrity musicians we have lost in recent times.

We're galled. We hammer our fists against the wall of death, our favourite pop names in mispelled graffiti. It's so easy to ask why. Why do people die?

Think about it. David Cameron siezed power here in the UK in May 2010. Before then, there hadn't been any significant pop music demises for years. But with Cameron's stone-dead face looming over the despatch box like a rubbish cloud, all the chart stars we love have passed beyond.

If you don't believe me, here's a list of sad losses from May 2010 until yesterday.

It's hard not to read at this litany of sadness then look at David Cameron's gravestone complexion and not begin to wonder...*

Further Fats:: A piffling statistical analysis of the 27-club
4 comments: 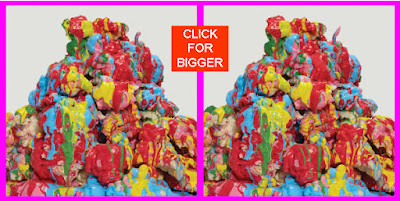 On the left is the glorious, scrumptious cover for Battles' Dross Glop, a collection of 12" remixes of their 2011 album Gloss Drop.  The remixes feature twiddles from people like Hudson Mohawke, The Field and Kode 9.

On the right is the same album cover with ten changes. Can you spot the difference?

Simple, really. Ten differences in the right-hand picture. How hard can it be? Circle the answers on your computer monitor.

Don't feel you have to squint like Godzilla stalking a really fit flea. Click the picture (or here) for a proper big version, which you can then download or resize or print or whatever.

Further Fats: When I first discovered Battles in 2007
2 comments:

Email ThisBlogThis!Share to TwitterShare to FacebookShare to Pinterest
Read more on: battles

And you do stop: Adam Yauch, writing and the toffs 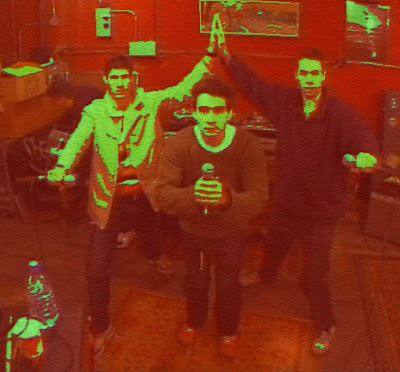 It has been one of those weeks where I've been tempted to tape up my hopes and dreams inside a bin liner and brick them to the bottom of the Mersey.

Firstly, there was the tossbag of political moisture that was local election day. I've always been politically astute: I cried when John Smith died, I proudly voted against Blair Blue-Balls in 1997 and I've attended several counts in musty old town halls. 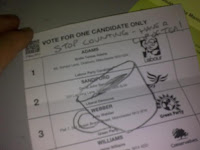 However, because Nick Clegg broke the entire of politics in 2010 by saying he was the progressive alternative then putting a bunch of Eton toffs in power with my vote, I don't believe in our system anymore*.

This picture shows pretty much how I felt about walking into a pointless polling station and being given pointless bits of paper. Still, my favourite (and mad) new Twitter feed, Manchester's drunk mayor, is giving me hope.

Secondly, the Hounds Of Hulme album has reached tug-o-war phase. I can't tell if a track is good anymore. I might as well dip my head into the washing-up and listen to the forks piercing my eyes. It's nearly finished, though, and you should like the band's Facebook page for news**.

This has brought on a wider malaise where I can't string one creative idea onto another. I'm performing 20 minutes of idiot fiction at Sounds From The Other City tomorrow (I'm not on the bill but honestly I am performing), but I've so little faith in the paltry new material I have***, I think I may request everyone sits in silence, crying. With forks in their eyes.

I know, I've still enough gumption to be able to plug my stuff here, but seriously... I'm bringing forks****.

The Beastie Boys (pictured, top) didn't just inform my musical world: they defined the universe in which I operate. This "Fat Roland" creature I foist upon an innocent world wouldn't exist without them.

In summary, I need a plan. And here it is. If I turn up at Sounds From The Other City tomorrow and find my slot replaced by the Beastie Boys featuring guest rapper Nick Clegg, I'm changing my name to Dorothy and moving to the Shetlands.


There. I said it. You can shorten it to Dot if you want.


* Why did I ever believe in the Liberal Democrats as a left-leaning force in politics? I'm such an idiot.

** Seriously, you should. The more likes I get, the less I'll bang on about it. Even I find this self-promotion tiresome, so goodness knows what it's like for you, you poor reader, you.

Further Fats: "It's not funny"... the Beastie Boys cancer announcement in 2009
No comments: