Fall in to my web

A few years ago, I wrote a story about a character who had been locked inside a deep freezer as a child. I learnt that you cannot add depth, and therefore engender sympathy, in a protagonist by having them vaguely traumatised by an incident from years ago. Strong characters comprise many past moments, and they carry with them multiple fears and hopes. Shoe-horning in a bit of claustrophobia is just weak.

Welcome to The DaVinci Code movie, starring Tom Hanks who, yes, fell in a well as a child. He should have stayed there, because the 'Code is a calamitous mess of ill-thought theory and tedious plotting.

My Photoshop rendering of the Dan Brown cover should say it all, really (edit: this refers to an image now long deleted I'm afraid). The crimes of this film are manifold.

The dialogue is saggy; most scenes could have been half as long even before taking into account the golden rule of not drowning your character's lines in clumsy back-story exposition.

The acting is pisspoor in places, with the French letting the side down thanks to the usually excellent Audrey Tatou and Jean Reno.

The plot drives this movie at the expense of any character depth, which is a pain because that plot largely consists of bad puns such as "Alexander Pope" and "a pope". Oh look how they can get confused!

Half way through the film I wondered when the damn camera would stop moving, obsessed as it was with tracking shots, pans, and authentic shakiness for running scenes, plane scenes, car scenes, any scenes really.

The film is let down in so many details too: in just one moment of many dropped directorial balls, we are treated to a moment of infuriating deux ex machina when doves just happen to distract a gunman at a crucial point. I would have had Tom Hanks see the doves and clap his hands in the echoey church, therefore providing himself with a way out rather than relying on a chance happening.

Sir Ian McKellen is the saving grace in this hellish film; his character is tortured, funny and fascinating and it is a pleasure to be engrossed in a McKellen masterclass. He is worth the ticket price alone, although Paul Bettany's ice-cold Silas provides more than a few moments of dark glee.

As someone who professes more than a passing interest in Christian teaching, it is not the theological mumbo jumbo I object to. It's such a weak film, the angels have nothing to fear. However, we are told in one of the numerous moments of exposition-through-dialogue that "God does not forgive murder". There is little hope, then, for the soul of Ron Howard, as he has taken a perfectly good art form and bludgeoned it to kingdom come.

Why use a long word when a diminutive one will do? 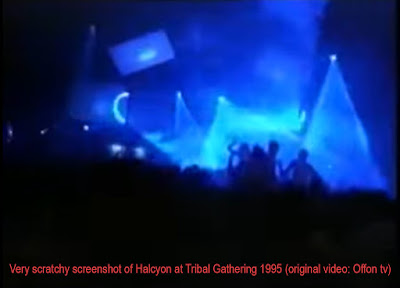 A gig is such a diminutive word for something that can turn your life on its head.

I still get goosebumps at the memory of Orbital playing Tribal Gathering in 1995. NME had declared them the greatest band in the world. I was enthralled at the bobbing headlamps, the blue lazer wash during Halcyon (above video discovered a decade after this blog post!), the anti Criminal Justice Act junglist tunes and enjoying being at the front despite being next to an MDMA junkie who spent the whole set going "wow maaan!". Somehow, inside, I was never the same again.

Plaid at Music Box a few years ago was also a great gig, although I wagged my chin with Fil instead of watching. Oh and others, so many others. God Speed You! Black Emperor at, I think, the sadly imploded Planet K. Daft Punk at Sankey's Soap before Sankey's Soap stopped being Sankey's Soap then they decided to turn it into Sankey's Soap again. Lamb at Manchester Ritz, some bloke with a Playstation at Futuresonic, 808 State at a post-bomb Re:Percussion, Autechre at the Hacienda, LTJ Bukem at the MMU...

Which is an extrodinary preamble to a sad admission. Take That the MEN Arena didn't change my life. It didn't get under my skin and make me want to wear the T-shirt. It won't make me cry for joy at a distant memory when I am old and lonely.
>Fried eggs

However, it was bloody brilliant. Where do I start? The ten foot hologram of Robbie Williams. Gorillaz' Dirty Harry backing Sure. The choreography and the amazing morphing stage. The waterfall with umbrellas. The waterfall without umbrellas (wet T-shirt contest anyone?). The twenty foot flames and 14,000 instantly tanned people. The "did you make shit-loads of cash?" nostalgia bit. Howard's creepy 'fried eggs' comment. The boy-band creator asking them to be ambiguous about their sexuality. The Beatles medley, not great but it made me appreciate the Beatles. The salsa, oh my gosh the salsa. I resisted the temptation to scream "I love you, Ronan!" during the quiet bits.
>Excuses
So yes, I have seen Take That. But remember - Tom Middleton of the gorgeous Global Communication cut his teeth on pop music, as did the Doves when they were Sub Sub. And where would the Prodigy be without one of the greatest pop tunes ever, and, um...

The 'Misadventures In Sound' posts dribbled into nothing during the second week of my fantastic Refresh FM presenting stint*. For this I apologise, but I was distracted by a rabbit.

The creature in question was hopping along the grass verge of a main road, nibbling whilst oblivious to the four-wheeled dangers hurtling past at 60 miles an hour. At first I thought it was a cute dog, but there is no such thing as a cute dog. And cute dogs don't waggle their fluffy white bums in quite the same way as bunnies.

Wild rabbits aren't too common near me, only wild foxes, so I decided I was dreaming. I started to take off all my clothes and fly, which I often do in dreams, but decided against it when the rabbit started following me. It needed help.

My help came in the guise of a family with numerous children milling around in a porch, and believe me, milling is a really hard thing to do in an enclosed space. I figured if the rabbit was local, then the children would know about it. Rabbits. Children. Children. Rabbits.

The children did know - the rabbit was called Kevin or Steve or Bubbles or something. So I left them to catch the rabbit while I hurried on to my appointment with a beer.

I like to think I saved the life of that rabbit, although my parting glance didn't fill me with confidence: the two youngest children were tearing down the pavement after the startled bunny, all of them getting ever closer to the stream of traffic.

Anyhoo, that's no excuse for not continuing with my Refresh FM posts as this happened yesterday while Refresh finished broadcasting a fortnight ago. But it is my excuse so shut up.

On a bus a few moments after my bunny fun, I saw a piece of graffiti which said 'Chris waggles his bum at boys' and it occurred to me maybe they were writing about the rabbit. Which leads me to two conclusions: the rabbit wasn't called Kevin or Bubbles or something, and bunnies really do waggle their behinds in the cutest cutesy cute way. Aaaah!

Did I just hear screeching tyres?

*Far too many adjectives before 'stint'. Reminds me of a lazy BBC News 24 piece I heard this morning that blamed the destruction of homes on 'mudslide-causing heavy rainfall' which left me reeling for a few moments while I tried to figure out what had caused what to do what.
1 comment:

The Cure for Information Overload

Woosh, radio over then life goes woot and yay here I am again.

Sorry, I think I've been affected by The Cure for Information Overload: a curious asserton, if you ask me.

Edit: Wow, that's a small letter 'a'.
No comments: