I don't know where to begin. Underworld's music for the Olympic opening ceremony had me teary-eyed and gobsmacked. It led to a gushy post a month ago in which all I could write about was toast.

Truly speechless. Between the two ceremonies, 38 million viewers got to see my favourite bands. And that's not counting the many millions more beyond our borders.

Apparently some sport is happening too.

My gob is thoroughly smacked..

Further Fats: My review of Wonky, which includes Where Is It Going, used in the above clip.
3 comments:

Email ThisBlogThis!Share to TwitterShare to FacebookShare to Pinterest
Read more on: orbital, video

Greenbelt Arts Festival and why it matters to me 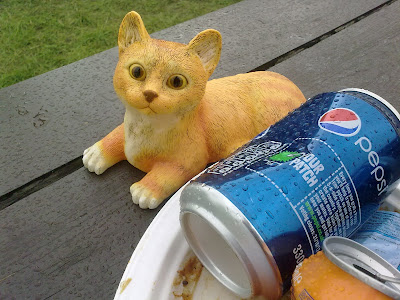 Written at Greenbelt Arts Festival at 8pm on Monday August 27th 2012, with some adjustments added later:

Twenty long years ago, I stood freezing in a rain-knackered field of mud-o-geddon watching the Proclaimers bang out songs of fishing, fornicating and fighting (possibly: I wasn't listening).

Yesterday, I found myself passing through a muddy field at the same festival wondering why so many people were gathered in their hundreds, their camping chairs floating in brown lakes of intestinal parasites and typhoid-ridden worm feces.

Yep. It was the Proclaimers again. Charlie and the other one that looks like Charlie got really Scottish with their guitars. I accidentally stayed for the whole gig, rooted to the spot by an overwhelming sense of nostalgia and whimsy. I could see myself two decades ago; I wondered if time had become a loop.

This blog post is not a review of the Twin Godfathers of Del Amitri Pop Jangling. It's a reflection on Greenbelt, a festival which is as much a part of my DNA as that probe suppository those aliens gave me last time I saw Squarepusher.

If you need a bit of context, you can read about Greenbelt in other blog posts, such as the time I went to some toilets, or when I spoke a man, or when I went into a tent for a bit. Oh, the stories I'll be telling my grandchildren.

Greenbelt is a Christian arts festival with lashings of liberalism. This year, they had Robin Ince, Speech Debelle, Nitin Sawhney, Frank Skinner, Asian Dub Foundation and Peter Tatchell. There is plenty of churchy stuff too if you like that kind of thing. There is music, there is art, there are tea tents, and I've attended almost every one since 1992. Loads of attendees have been to many more than that.

The festival tends to attract music artists on career-slides, although they were quick to get the likes of U2 and Moby before they went stratospheric. Neither is it big on electronic music, although I heard some filthy dubstep on one of the three music stages on Monday.

Greenbelt also causes consternation among anti-gay and anti-Palestine campaigners. A devotee of a more evangelical festival once warned me that Greenbelt was full of "gays and witches". He was wrong about the witches.

But it's there's more to Greenbelt than the content or its supposed political stance or its boundary-poking.

Greenbelt is where I live; it's where I centre myself.

It's a place of discovery: my talents, my sexuality, my careers, new friends. There are certain folk I only ever meet in Greenbelt's real ale tent (called The Jesus Arms), and when I see them it's like arriving home, opening the door and seeing family. Even though I only speak to them once a year. It's seems illogical and it's hard to explain.

Greenbelt matters because it gives me roots in a world of judgementalism and homophobia, in a world where people use religion to enforce their own power and prejudices. It makes me feel valued and to want to be a better me. I also get to do fun things like run events with Sanctus 1.

Next year, Greenbelt celebrates its 40th festival. I will have been to half of them (and will be celebrating 40 years of me too). Just writing this blog post finds me rooted to the spot by a sense of nostalgia and whimsy, as I was in that muddy Proclaimers field as I mentally battled their damn infectious melodies. I'm a techno-head... must break away... a-hah, a-hah... gaaaaah, stop it.... Yeah, I know, I'm not proud.

Meanwhile, I'll be processing my amazing few days at Greenbelt 2012 as I wash the mud from my clothes. If you want to read more about the festival, see Robin Ince's take on Greenbelt here.

Pictured: a fizzy drinks fan at the Tiny Tea Tent

Further Fats: the time I live-remixed a communion service
2 comments:

Because / a melon / only slightly: birthday thoughts 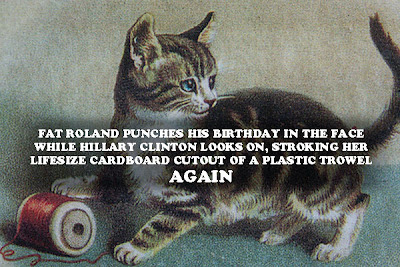 Another birthday is crushed underfoot by the hippo of time, so it seems appropriate to look back over the last 12 months and ask myself some important questions:

Among the many highlights of the past year was the moment I was crowned Miss Manchester. It all seems a blur, but I do remember being hoisted through the city streets on palm leaves, feathers and heavy-duty scaffolding. The sash matched my varicose veins.

In December, I trapped all of Manchester's police in the sewers and injected explosives into all the concrete. I then imploded our American football stadium before making a man in a bat costume climb up a bit of a wall.

The other week, I gave up my Fat Roland moniker and became Thin Malcolm for a day. This time was largely spent flat on my face weeping furiously into the threadbare weave of my carpet. I then went on Jeremy Kyle and fought myself for custody of myself. Good times, good times.

Birthdays are about presents, so here are two things. Firstly, a Hounds Of Hulme track I recorded today (see below). It's a bit rough-and-ready, relying too much on preset instruments, but I like it. The energy from the track largely rose from watching the awful Olympic closing ceremony on iPlayer. In the words of Twitter's ever-reliable funny bloke Vivmondo, "I suppose we'll simply never know why David Bowie turned down the opportunity to appear alongside Ed Sheeran and a tape of Kate Bush."

Then after the music, why not click here for a series of inspiration quotes I bombarded by Facebook friends with over the weekend. I hope you too will find them inspiring enough to find your place on the carpet, that sweet spot in the dust and the fluff and the skin.

It's just a bit of a wall. I don't see what all the fuss was.

Further Fats: Chillin' out maxin' relaxin' all cool (my birthday three years ago) 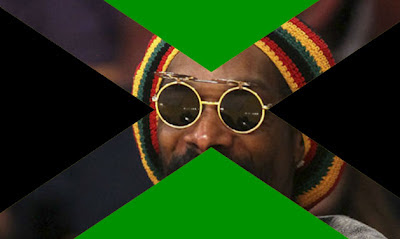 This is the world in two years time.  Snoop Doggity-Dogg, best known for his hits My Name Is Snoop Dogg, Snoop Dogg Is My Name and Drop It Like It's Snoop Dogg Yes That's My Shizzling Name, has changed his name to Snoop Lion.

This is the biggest name change in popular music since the Morning Benders toured the UK to gales of laughter. Snoop Puddytat probably phoned Prince to ask for advice, although all he'd get is crackles on the line and sound of the paisley berk drawing squiggles on his face in crayon.

I like cats. Scratchy, Simon's Cat, Snarf, Stimpy, they're all great. But other than Orbital's talking ones, I'm not sure I want them in my music. 'Caterwaul's a word for a reason, you know. Before others start changing their names, I hope they paws for thought. Paws. Pause. Hello? Is this microphone on?

And it's the weird transition. Eek-a-Mouse wouldn't change his name to Eek-a-Buffalo, and neither would a dog turn into a lion. If they did, the local park would get much more interesting very quickly. And not in a good way.

Snoop's real name is Calvin. He's even got that wrong. That was the boy; Hobbes was the lion.

Still, he's working with Major 'Diplo' Lazer, the chap behind MIA's ear-busting Paper Planes who describes his own music as Hare Rama James Bond Ethiopian lumberjack. And as long as Snoop Liony Lionn doesn't start rhyming his name with "iron" and "zion" (why, Bob, why?!), we should be okay.

Further Fats: Homoerotica *and* analogue ambience: my levels of internet presence (in which I plug a website that has since, wisely, changed its name).
No comments: