I spent most of this year pretending Manchester International Festival didn't exist. Blah blah blah, leave it to all the Macbeth-quoting theatre luvvies.

And then I won tickets to The Machine (pictured) courtesy of the Postcode Lottery of all things. It was an edge-of-the-seat, imaginative and funny play that bent reality and built the stakes beautifully.

Then I thought that was it. Done the festival. Tick box. Outta here. Fat Roland has left the building.

However... you know when you lace the jelly with heroin and all the children get addicted and no-one suspects you because you're the clown and no-one's going to check your shoes for high-grade class As?

That. Except the clown is the festival and I am the children and the drugs are:

- Maxine Peake's passionate and haunting Masque of Anarchy, which reminded us that great theatre can send hearts reeling:

- Tino Sehgal's unsettling and mesmerising This Variation, which replaced one's sense of safety and security with a surreal horror; 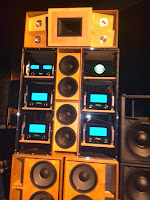 - James Murphy's friendly and inclusive slow-disco club night Despacio, which used a custom-built sound system to dance away the mothballs;

- Festival Square and its fun transformation of Albert Square / the magical access to old buildings / the super-friendly volunteers / tremendous word-of-mouth buzz that deserves some kind of marketing award.

So yeah. All that. MIF transformed Manchester into a living hotbed of creative surprises: theatre for the people. It was hot, sweaty, dramatic fun and it made my city a community again.

With thanks to Cowboy Boots Dave, Ros + Lee + Sarah, Dancing Matthew, Hartley Hare + numerous people to whom he's either engaged or related or friends with (mostly the latter), various ticket sellers, um, the Postcode Lottery, and anyone else who mainlined me some festival.