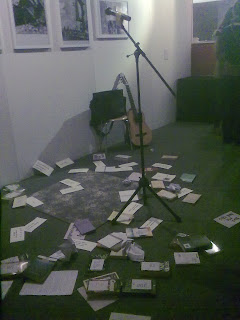 It is a year, a week and a day since my patently ridiculous call to literary arms, The Beatoff Generation.

Since then, we've run reading events, pub quizzes and competitions, and even produced an anthology which was, let's face it, a hare's testicle away from being outright pr0n.

It has also changed this blog because much of my spare time is now about writing fiction rather than raving with the Aphex 'til the wee hours. In the past fortnight or so, you may have seen me read a story about a desperate shop manager at ReTale, try out my Brian Cox dirtiness at Exhibit C, watched me spew out my first 20-minute set at Blank Space and have authors spluttering into their beer at Word Soup.

The aftermath of my Blank Space set can be seen in this picture. This represents the fall-out of five stories told in my, um, particular style. Even the guitar is mine, although it only has five strings because I used the high E to floss my toes whilst high on envelope glue. You know. LIKE YOU DO.

My latest empublishment is a story called If You Were The Only Boy In The World, which I will read at this Wednesday's Bad Language birthday bash. The story can be found in their new anthology, to be launched screaming at the public on the same night.

And after that, I'll do something stupid at Say Something. An event a week. That's my plan. And if you want the full Fat Roland fiction treatment and you can provide a good audience, I'll do a 20 minute set for you.

Meanwhile, do pop your nose into the Manchester literature "scene". Some say it is somewhat self-regarding, but that's why we did the Beatoff Generation manifesto. It's welcoming and open and a lot of fun: why else would a natural outsider like me be involved.

I'll leave you with some lovely words about Bad Language, who have done so much to support new talent in this city. Katie Anderson writes about her literary open mic performance there (a story "sort of about ghosts, but not really", which is the best kind of ghost story), while Aaron Gow recalls his first stage performance at Bad Language as being "slightly addictive".

A year, a week and a day is a long time at Fat Roland towers. Here's to the next arbitrarily-chosen-time-period-because-it-was-meant-to-be-a-one-year-anniversary-but-I-forgot-until-now.
3 comments:

Richard Whiteley: off my anus

Imagine the 1996 Manchester bomb, but smaller and inside a power unit.

You may think that is an insensitive comparison, but there were 15 handsome badgers working the innards of that machine. Now my writing room is wallpapered with animal brains and wiry black and white hair.

The hair may have been there before.

I'm hoping the Nice Computer Man can save my machine. As long as he stays away from the folder marked Compromising Photographs Of Denuded Biscuits, I should be okay.

The worst thing about this calamatous event is how much I'm missing my music. Someone played me a bit of Laughable Butane Bob today and I nearly orgasmed into his cappuccino. The only thing I have left on CD are Echobelly's Greatest Hits, that collaboration between The Kooks and Kraftwerk, and Tina Turner tribute band The Nutbush City Mimicks.

The positive side of being computerless is I got off my anus yesterday and had a lovely Sunday lunch. From now on, this blog will be dedicated to lovely Sunday lunches. Cooked by Wetherspoons. In exchange for £6.99, or £8.49 if you want inexplicable cauliflower cheese with it.

I went for the cauliflower cheese. This is my new life. My new computer-less life.

(PS - if you want to see me read an interative story about Richard Whiteley, come to a night called Exhibit C tomorrow. I may do three stories, each obsessed with the idea of celebrity.)
5 comments:

Next up in the wonderful world of Fat Roland Making It Up As He Goes Along is a unique site-specific story evening called ReTale.

This Thursday, November `17th, my good self and five of m'colleagues will perform six brand new stories in the Triangle shopping centre, or more specifically, in the ladies clothing shop Jigsaw.

With ReTale, we hope to bring a little bit of theatrical nous to the imprecise art of live fiction performance. My fellow performers are the irrepressible Bad Language gang, my Flashtag cohort Dave Hartley and mumblin' Nick Garrard.

My story will contain this line:


“He wants to remove her empty skull above its equator, sit inside  the recess then ride her around like some bezerking automaton.”

It starts at 7.30pm sharp and there will be drinkies. Grab your tickets now, or risk it and pay on the door.

And if you don't like our stories, you could always pick up yourself a little silk ballet dress. Red. Off the shoulder. It'll look nice on you. 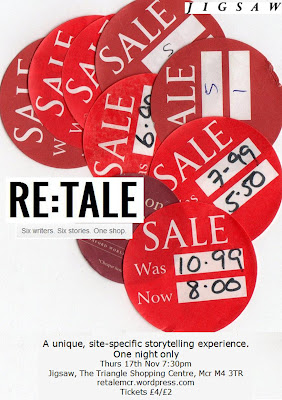 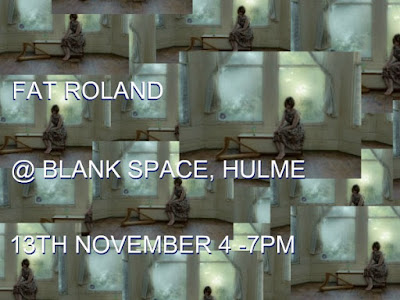 As a tribute to the contents of my head, the name "Blank Space" seems a suitable place for a Fat Roland performance.

So join me tomorrow at Blank Media Collective's fifth birthday celebrations where I will be spewing 20 minutes of my half-brewed pot of fiction stew. It all kicks off from 4pm on Sunday at Blank Space in Hulme.

They're aiming for a speak-easy vibe, with spoken word, poetry and music courtesy of any old sops that turn up to the open mic. Why not be a sop yourself and come and take to the stage? Some time before 7pm, I will headline proceedings along with performance poet and installation artist Rebecca Joy Sharp.

I'm billed as "spoken word", which is an anodyne phrase which is a bit like saying "sounds like Coldplay". Then again, I dislike the phrase "flash fiction", but if it's a wording I've got to wear to persuade you to turn up and listen, then pass me the tattooist needle.

It's my first proper fiction set. From me, you can expect comedy, horror, sadness and my first ever performance with a guitar. It's all hosted by the lovely Blank Pages, who were kind enough to publish my scribblings recently.
No comments:

I got the pop song, I got the melody

I think that's what they call them. Earworms are those snippets of melody that lodge themselves in the tissue of your brain.

At the moment, I have a merry-go-round of cacophony in my head. Part of the noise is a disco record that I can't quite put my finger on. It may be the Jackson 5. There's a bit of Womack and Womack in there too. It then morphs into Sydney Youngblood's If Only I Could. He's a cheery German Texan who raised the ire of dance music rival Soul II Soul back in the late 1980s with his chippy cheerful rip-off soul pop.

But not the chorus of If Only I Could. Oh no. Just the start of the verse and the few bars leading up to that.

Which is my problem with earworms. The sign of a good producer or songwriter is their ability to make even the innocuous bits of the song sound as amazing as the obvious hooky bits. Everyone from Trevor Horn to Timbaland is good at this, and it means that a wriggly little earworm can crawl from anywhere in the deep depths of popular music and surprise you with its catchy little hooky teeth.

What I'm saying is, really, that there's too much melody out there. It would be nice for everyone to have a lovely chorus, something-- y'know-- really smashing, and for the rest of the song to be a tuneless, forgettable dirge. It worked for the likes of Echobelly, Oasis, Aliyah, U2 and pretty much any artist beginning with a vowel.

East 17. Adele. Elbow. Every artist beginning with a vowel. Every single one. It works. Try it.

The only way to rid your mind of an earworm is to scoop your cranium empty with the digger your Uncle Dave nicked from the local university building works last Tuesday. Or have a reputable pop impressario such as Gary Glitter, jonathan King or Michael Jackson's corpse do one of those worm-charming things on your skull and tap your bonce incessantly with a long stick.

I call them earworms. What do you call them? What's in your head right now? Am I just asking this to give the impression of interactivity on this blog? Yes. I'm not interested, so bog off. Unless you want to sing me a song in the comments. A lovely, smashing uncatchy song.
1 comment: