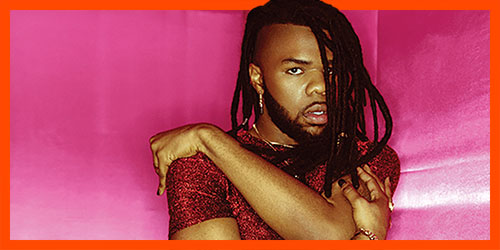 What an amazing August that was. Do you remember the bit when the meteorite smashed into the Earth and the skies were made of fire? That was my favourite bit.

Lots happened in the world of music. Fitness trainer Joel Corry spent all month at number one, with vocals from the rather wonderful MNEK (pictured). Hudson Mohawke put out an album called Poom Gems, which sounds like an anagram for something disgusting, and no I'm not going to check.

Smash Mouth made a fantastic contribution to the spread of Covid-19 (well done, chaps). Cardi B and Megan Thee Stallion had the audacity to be body-positive women in a video, and a lot of men weren't happy. Kae Tempest came out as non-binary. Taylor Swift released some music I haven't been bothered to listen to.

"So we're agreed, the video will be Kylie and a pretend horse?"

"Yes, just that, nice and simple."

"We could add in one or two sparkly bits, perhaps..."

The shy and retiring Elton John called for more "proper songs", which as far as I can tell means music made without computers. I'd expect this fusty attitude from some old bald bloke called Reg, but not from the pop superstar Elton J— oh wait.

But most of all, I liked that bit when the meteorite wiped out all human civilisation. Do you remember that happening? It trended on Twitter for a whole afternoon. Strangely the burning space rock hovered momentarily above the ground before zeroing in on Nick Clegg. Poor guy. I know he lied about tuition fees, killed off PR for a generation, put a Bullingdon boy in number 10, and is now a shill for Facebook, but being the first human to get flattened in an apocalypse seems a bit harsh.

Oh and this happened. Roll on September, readers.

WOMAN PASSING ME IN THE STREET: Hey, you look like Mike Ashley.

WOMAN: Has anyone ever told you that?

ME: Actually they have.

WOMAN: He drives a Rolls Royce.

WOMAN: He's got a Rolls Royce.

Further Fats: Do stop believing: the rock music fad is over (2011)

Further Fats: Ten things I did in September (2018)

What do you MEAN you haven't heard of Acid August? 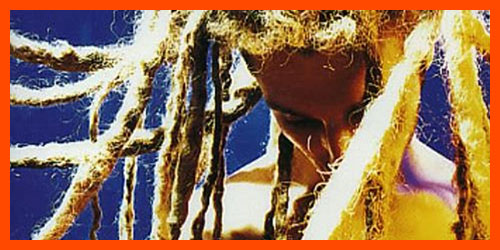 As we approach the end of the month, I really hope you've enjoyed listening along with Acid August.

Pardon? You've never heard of Acid August? Have you been living under a rock?

The whole idea of Acid August is that you spent the whole month listening to acid house music and nothing else. Are you telling me you've not done this? Have you that much disrespect for Acid August?!

Admittedly I didn't mention Acid August, but it was difficult to figure out. It's the alliteration. Acid in August, Metal in March, Jungle in June and Off-Kilter Space Jazz in October. I shouldn't have to explain this to you.

Despite your wilful negligence of Acid August, I've hastily cobbled together a list of well-known acid classics you should have been listening to. Maybe you could invent a time machine to rescue the month you just wasted. Harrumph. You people.

Why not go through that list and tick off all the acids you have listened to this month? And in the future, please don't forget Acid August.

See you this time next month when I'll be checking on your progress in Soft Rock September.

Mark Morrison pumps up the world and lets down my dreams 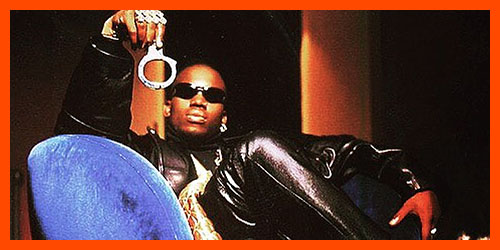 Last night, I dreamt I presented a live stream of Mark Morrison performing his hit single Pump Up The World.

"Wow, Fat Roland, that is really impressive. You are presenting live streams with pop stars. Your career seems to be going very well, in your dreams." Thank you for pointing that out, reader.

I would have preferred him to have sung his famous 1996 number one Return Of The Mack, but Mr Morrison insisted on going with his lesser known follow-up single Pump Up The World. Who wants him to perform that? That's like being rickrolled with Together Forever instead of Never Gonna Give You Up. Still, in my dream he seemed like a tough guy: I wasn't going to argue.

Turns out the phrase is a lyric from the chorus of Return Of The Mack. "Return of the Mack (once again) / Return of the Mack (pump up the world)," says the song. My dream separated it out into a separate track. What's next, dream brain? One Cheeky Girl single? The J bit of Jedward going solo?

I was devastated to find this falsehood. As he stood there on the steps of some bustling US public building (my dream didn't specify the city), the Mack sang some bogus, non-existent single. I remember enthusiastically announcing the song for the live stream, giving every bit of charisma for the camera. I did my part, but Morrison let me down with a egregious lapse of integrity. Dream Morrison is a liar and a charlatan and cannot be trusted.

I know he's done some pretty violent stuff in his life, but if he turns up again in my brain, I'm kicking off. In my dreams, I'm well harder than him. I *am* going to argue. I'm gonna tweak his nose and give him an arm burn and do some v-signs at him. To misquote his own number one single, Mark Morrison lied to me. Yes, he tried, yes, he tried. He lied to me.

I've posted about my dreams before on this blog, and I realise banging on about them may be a little tiring for my readers. But this really upset me. If you can't trust an imaginary version of an r'n'b singer to perform a song your unconscious self made up, then who can you trust? Huh?

Email ThisBlogThis!Share to TwitterShare to FacebookShare to Pinterest
Read more on: mark morrison

Issue 68 of Electronic Sound: if Humpty Dumpty sues, I'm as stuffed as him 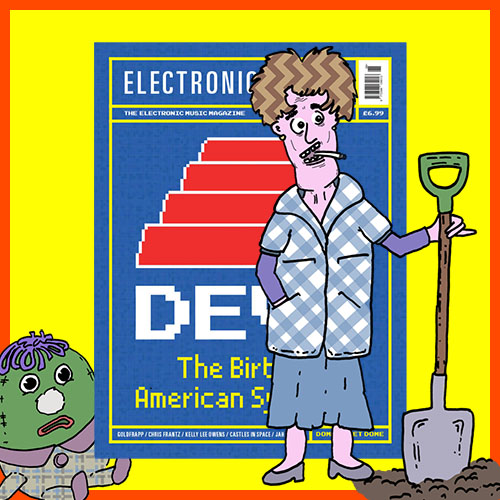 In issue 68 of Electronic Sound magazine, I turn my attention to a box-shaped hole in my life: my lack of a television.

In my new column, I reflect on my lack of a telly while shoe-horning in references to Kraftwerk, Orbital and Future Sound of London. I also besmirch the names of Humpty Dumpty and Dot Cotton. I hope nobody reads it: if Humpty Dumpty sues, I'm as stuffed as him. You can pick up a copy of Electronic Sound in shops or online: it's the one with Devo on the front cover.

Not that any of this matters because I now have subscriptions to about 52 streaming services. I have allowed television back into my life through the back door. Well. A very wide open front door. As I say in the column:

Television streaming helped during lockdown because everyone could finally spend all day watching ‘Floor Is Lava’ while power-chugging Häagen-Dazs just like they’d always dreamed.

This new edition has Electronic Sounds' biggest review section of the year so far. My own contributions include an appraisal of the new album by Erasure ("this neon flickers with regret") alongside my takes on GLOK, Nicolas Bougaïeff and Ellen Fullman & Theresa Wong. M'colleagues have also written about new albums from International Teachers of Pop, Rival Consoles, Scanner and Daniel Avery. Well worth a read.

Must stop writing: I'm about to miss the new episode of Eastenders / Only Fools And Horses / Birds Of A Feather / Brush Strokes / Howard's Way / the test card / Network 7 (delete as appropriate). 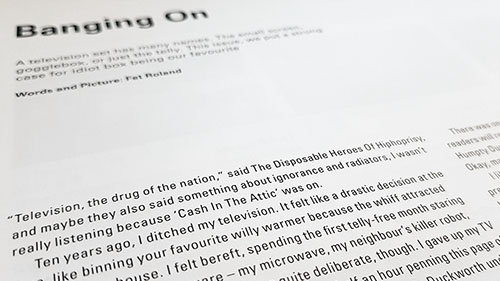 The Battle of Britpop: the dullest beef in the history of beefs 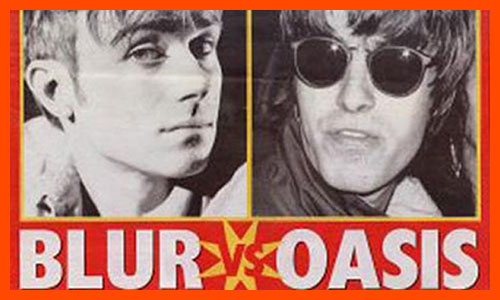 This week, it's 25 years since the Blur / Oasis 'Battle of Britpop'. They went head to head in a battle for number one in what became a definitive moment for 1990s indie music.
The battle lines were clearly drawn. You were either a chirpy Blur fan prancing around like a jolly Cock-er-nee chimney sweep, or you were a swaggering Oasis fan ready to have a scrap with "our kid".
You had to choose one or the other, like the Mods or the Rockers, like the Beatles or the Stones, like Gordon the Gopher or Edd the Duck. And if you couldn't chose, you just feigned a Jarvis Cocker swoon and kept your nose out of it.
Blur got the number one spot and Noel Gallagher tried to curse them with "catching Aids", but the victory meant nothing. This all-consuming pop war was hollow: a clanging bell full of sound, fury and cobwebs. Yes, there was the class war aspect: the Leadbetters against the Goods, upstairs versus downstairs. But my real issue is one of quality.
It now seems criminal that two bands used their worst singles to create the dullest beef in the history of beefs, resulting in half a million record buyers being ripped off with sub-standard product.
Roll With It is a leaden dirge that wasn't even worthy of a Slade b-side. Country House was Blur at their most annoying, so faux posh that you could imagine Jacob Rees-Mogg enjoying it. That's right: just imagine Rees-Mogg snuggling under the covers with his gramophone, flicking himself off to the line "everything's going jackanory".
I wouldn't mind if this had been a couple of crap bands scrapping it out: if the Cheeky Girls wanted to have a fist fight with Las Ketchup, I'd have just left them to it. But these lads were at the top of their games – and they farted out such nonsense. I can only drool at some alternate universe in which The Masterplan went up against The Universal. Instead we got, in the parlance of South Park, a turd sandwich versus a giant douche bag.
That was only the beginning. The massive media attention then morphed into 'Cool Britannia', the broadsheet-friendly Union Flag-waving version of Britpop that saw Ginger Spice become ruler of South Africa or something. Meanwhile, indie music never quite recovered: this fatal breach of quality opened up the beige hell-mouth that was the Stereophonics, Travis and Satan's favourite band Coldplay.
I'm not necessarily saying that the Oasis versus Blur battle killed indie music forever: that's for you to decide. But what a con it was. Thank goodness for the Chemical Brothers and the Prodigy soldiering on during it all, cementing a glorious electronic future, otherwise there'd be no music left worth listening to apart from the ever-fading echo of disappointed sighs.
As a great philosopher once wrote, "I think I've got a feeling I've lost inside." You, me and the rest of us, Liam.
Further Fats: Christmas chart battles and the chamber of echoes (2014)
Further Fats: 1997: what the flip was going on? (2017)
1 comment: