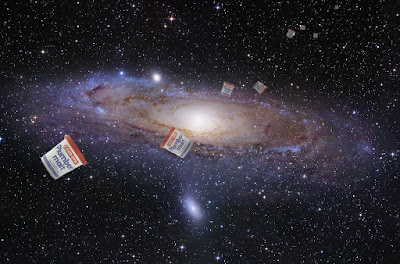 I've been quiet in The Happy Land Of Bloggy, but it's not been without good reason. Here is a list of ten things I have been up to instead of wiping my word genius on your eyeballs.

1. Building a lifesize model of the universe from Plumber's Mait putty.

2. Starting a religion made of cats. It's difficult to make an abstract concept from a real thing, so I've had to build a robot that can bend reality.

3. Constructing a cellar for my cellar. I really felt my cellar was lacking somewhere from which to walk downwards from my cellar. Have been taking advice from moles.

4. Writing an extensive Wikipedia article about the 56BC FIFA World Cup, printing off the resulting page and making it into a papier-mâché football which I then burned.

5. Deleting words from the Oxford English Dictionary that we don't use nearly enough, such as "vine", "azure" and "micromelic".

6. Mastering the art of levitation, but cheating and so spending my time inventing an invisible table instead. Harder than I thought. The main material is fine, but B&Q don't sell non-see brackets.

7. Applying to Manchester City Council for planning permission to extend my brain. A bit frustrated that Ordnance Survey don't do detailed A4 site plans of the cerebral cortex. Embarked on a cartographic analysis of my cerebrum. On an unconnected note, also bought a dictionary.

9. Naming my first three children Boom, Boom and Pow. Not because of the Will.I.Am thing, but because that's the noise I make when I'm building a robot mole to transcend invisible reality using putty.

In the next 24 hours, formula one will be changed forever

Well. Not forever exactly. But the deadline for my F1 Losers League is tomorrow (Friday) night.

I have no interest in cars or in sport, but F1 somehow commands my attention. I like the racing, the personalities, and the tight-fitting overalls. My interest in F1 has developed into a geeky passion, so for several years I have run a fantasy league with a difference: your team has to be the worst you can possibly make it.

You enter once and this lasts for the rest of the season. But the deadline is tomorrow night, April 13th, at 11.59pm BST, so you'll have to get a move on.

It's free and no-one wins anything. It is a loser's league after all. To enter, (1) you just choose one name from each Group here, and (2) think of a good F1 Losers team name. Email me and you're entered for 2012 (more details on entering, including the email address, here).

I would love lots of entries in 2012, although I only usually get a few. You should do it though, because it gives me an excuse to photoshop lots of silly picture captions.

In the next 24 hours, formula one will become infinitesimally different because, yet again, the F1 Losers League is here.

Further Fats: Save Takuma Sato! (in which I took a year out from doing the League)
No comments:

Email ThisBlogThis!Share to TwitterShare to FacebookShare to Pinterest
Read more on: f1 losers 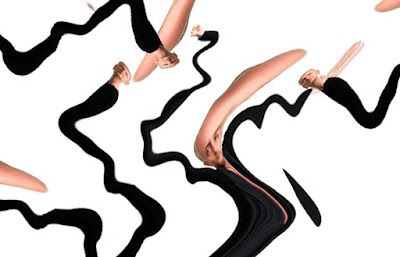 Orbital's history in brief: rave band reinvents the techno album, gets a bit political, conquers the rock festivals, release one album for every first-era Doctor Who, play their last ever gig on John Peel, disappear into side-projects, start gigging again then begin to worry fans that their eighth outing could be a Paul McGann.

Their eighth album is Wonky in name but not in style. There was a time when Orbital couldn't put a foot wrong, so is their long-playing comeback worthy? What does God say? Much more importantly, what do I say?

I wrote this as I listened to the album for the first time tonight. Let's explore Wonky track by track.

Track one: One Big Moment teases you with looping voice samples of Duck Feet-era whimsy before hitting you, at precisely 70 seconds, between your techno nostrils and declaring Wonky as the best Orbital album for yonkers.

The processed mayhem is a delightful statement of intent so early on.

Track two: The scuzzy LFOs of Straight Sun mix Snivilisation wafer-thin monophonic synth lines with more plodding, stomping Blue Orbital, and it's no less pleasing for any of that.

Tracks three and four: The slow builder Never makes a feature of those trademark half-bar bridges that litters their music, while the proggy New France seems to be Zola Jesus filtering Rihanna's "ay ay" vocal cut with an intense synth rock sweat-in. Both work with limited ideas to great effect.

Track six: I'm not sure if Belfast has Beaches, but Stringy Acid mixes two very different Orbital periods whilst apparently intending to emulate the sound of seagulls being shot. It's the one full-on floor filler on this album.

Track seven: The Hartnoll brothers attempting dubstep on the multiple-personality Beelzedub (a remake of Satan) is a bit like your dad wandering into a club and breakdancing, body-popping and footstepping the rest of the dancefloor into a week next Tuesday. It's a bit all over the place, but still, y'know, better than 99% of all dubstep tracks.

Track eight: Title piece Wonky has Lady Leshurr busting rhymes whilst she plays Whac-a-Mole with cats. Its toe-dip into new territory reminds us Orbital were often as much of a house act as a techno group - and also that Paul Hartnoll had a rather successful collaboration once with David Gray. Larks.

Track nine: Where Is It Going? brings us back to the theme of the album: emotive, punchy classic Orbital, deceptively simple, positively angelic. The whole album, although not perfect, is a brilliant return to form and is the sound of two guys finding their mojo once again. Although you find yourself yearning for a long epic to finish with: Wonky is suddenly gone and the title of the last track is left dangling in the air.

If this is their Paul McGann, then I'm already really looking forward to their Christopher Eccleston. Wait. Haven't they had him already?

Orbital's history in brief: they're back and they're better than I expected. Wonky is one of their best.

Further Fats: Some lists containing rhyming Autechre, Orbital in colour, and the entire history of dance music
No comments:

Win the chance to live with The Orb forever 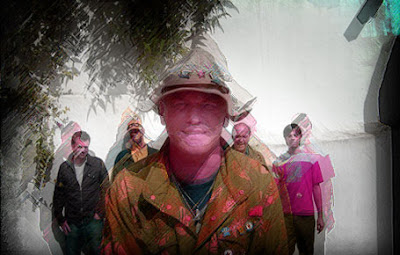 It seems an appropriate day to unleash a new competition here on Fat Roland On Electronica: you have the opportunity to become The Orb's lodger for the rest of your life.

Many will remember the Noel Edmonds programme in which a contestant called April First (may need to be a bit more subtle - ed) won a trip to Blackpool with Charles Manson. Well, this is like that but with ambient music and it's permanent.

Keen observers of my Twitter feed will know I woke up on Friday to find The Orb in my living room doing their French homework. I was a bit confused so I offered them breakfast. They just misbehaved.

"The Orb are now in my garden on tiny bikes trying to do wheelies. They keep falling over. Stick to what you're good at, I keep telling them."

So don't be afraid to instill a little discipline in The Orb towers. This competition, which is definitely a real thing even though it may sound kerrrrrazy to some (what are you trying to achieve here? - ed), could be the best thing that ever happened to them.

Everyone who enters wins! 100% success guaranteed. If you leave a comment, you get to live with The Orb. This is uppermostly true. Very facty. More truth than the word tooth with an r in it.

Enter now! Enter! Enter the competition! Enter. Is this okay or should I keep typing 'enter'? (No and no - ed.)