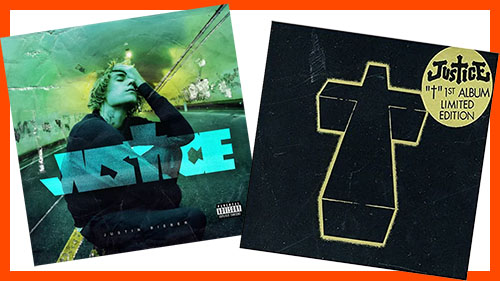 Here's the Justin / Justice story. The cover art for Justin Bieber's new album Justice appears to have ripped off the logo of the French house band Justice. A big cross for a T is the clue: this was very much Justice's thing, particularly on their cross-emblazoned debut album.

In itself, this isn't that incriminatory. In a past life I worked for a Christian bookshop and people plastered crosses on everything. They turned Ts into crosses, Xs into crosses, laugh-cry emojis into crosses. Maybe not that last one. It's a pretty route-one design technique, like turning Ss into snakes or turning As into anarchy symbols.

However, there's a paper trail (and no, we don't mean this joke doodle from Justice's record company). We all know from cop shows that paper trails are bad. Apparently one of Bieber's people wrote to Justice's people, according to an email seen by Rolling Stone (the magazine, not the wrinkled rockers). No-one got back to the Bieber peeps, so they pressed ahead anyway, but now Justice's people are cross (geddit?!) and have issued a cease-and-desist letter. The war is on.

Bieber also used audio of Martin Luther King on the album, for which he received permission. This is, of course, problematic in a different way. It's good that a famous white man is introducing black history to his fans, many of whom may never have been exposed to this stuff before. But it's also dodgy that a famous white man is appropriating stuff like this to sell records, especially when there are current black voices being silenced. This is, of course, from the same bloke who said Anne Frank would have been a belieber. It's all a bit icky.

It also seems that the justice theme is pretty perfunctory. There's the Justin / Justice wordplay. Yep, I get that. Then there's the MLK samples, including the line "Injustice anywhere is a threat to justice everywhere." But according to Buzzfeed, that's it. Hold On is about holding hands with his girl. Holy is about having a nice hug with his girl. Lonely is about the isolation of fame, probably while playing pat-a-cake with his girl. This is not an album about justice: it's just a selection of his usual watery pop guff.

Let's think about that for a moment. Someone came up with the Justice title because it sounds a bit like Justin. They made an apparently half-arsed attempt to get permission to use Justice's cross logo, then used it anyway. And then they dumped some MLK speeches about justice into an album that is otherwise nothing to do with justice.

That's like setting up a lemonade stall dressed as a lemon, with a whole range of home-made lemonades laid out neatly on a a table-cloth displaying a lovely tapestry of carefully illustrated lemons, with little handmade paper lanterns in the shape of lemons, then stealing someone's overweight poodle and calling the stall Look At This Massive Poodle.

Just stick to the lemons, Justin. The unnecessarily purloined stuff is just complicating things. It's a distraction and it's getting you into trouble.

I guess what I'm trying to say is if this ends up with a load of overblown proggy Justice remixes of Justin Bieber songs, I'm moving to Mars and never coming back. Now excuse me while I edit this blog post to ensure every small-case m looks like a pair of testicles.