Erasure's video for A Little Respect, line by line 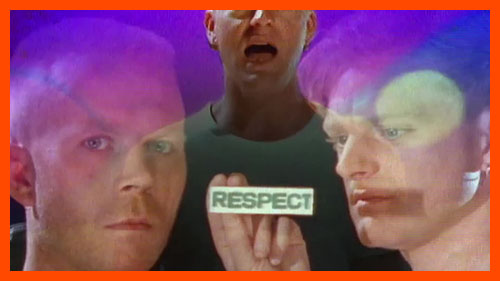 In this essay, I will prove that the video for Erasure's A Little Respect is a cinematic masterpiece, on a par with Citizen Kane, the Godfather Trilogy and the Spongebob Squarepants Movie.

Actually, it's not quite an essay. I'm simply going to describe how the video subtly illustrates each line of the lyric. Strap in. Get the video loaded up (or stream at the bottom of this blog post), and follow along below.

Erasure's video for A Little Respect

"A little something to make me sweeter"
Loads of sugar is spooned into a decorative tea cup, stretching the meaning of the word "little"

"Oh baby refrain from breaking my heart"
Andy Bell tries to stop a hammer-wielding Vince Clarke from breaking the heart that Andy is holding: Vince does indeed smash the heart, and Andy laughs at the futility of life

"I'm so in love with you"
A child dressed as Cupid curls up on the seat of a JCB, perhaps suggesting love is a bulldozer

"I hear you calling"
Andy Bell, finished with his construction work and what appeared to be an impromptu birthday, is now yodelling

"Oh baby, please, give a little respect to me"
Vince Clarke gives Andy Bell a small sign with the word RESPECT on

"And if I should falter"
Andy Bell leans onto a pillar which falls over, taking Andy with him

"Would you open you arms out to me?"
Vince Clarke opens out the arms of a skeleton and looks very pleased with himself

"We can make love not war"
Clad in army camouflage, Andy Bell and a lipstick-kissed Vince Clarke hide in military netting

"And live at peace with our hearts"
Andy Bell and Vince Clarke stand in the doorway of their home, which is called, according to a tasteless sign above their door, PEACE WITH OUR HEARTS

"I'm so in love with you"
The Cupid child fires a bow and arrow, then cheers furiously, presumably in delight at the person he's just killed – a risky crime considering we know the Erasure boys own a magnifying glass and a microscope

"I'll be forever blue"
Vince Clarke and Andy Bell turn blue again, and show no concern at this repeat incident

"What religion or reason could drive a man to forsake his lover?"
In a scene reminiscent of Bronski Beat's Smalltown Boy, Vince Clarke and Andy Bell walk away, bindles over shoulder and surrounded by the precarious pillars that previously foxed Andy

"Oh baby, please, give a little respect to me"
A smug-looking Andy Bell gives a larger RESPECT sign to Vince Clarke, further stretching the definition of the word "little"

"I'm so in love with you"
The Cupid boy again, whose actions are harder to make out but he could be playing darts at God's face – he doesn't appear again, presumably smited

"That you gimme no reason, you know you make me work so hard"
A flat-capped Vince Clarke mops his brow as he pick-axes, off screen, a pavement or possibly the Cupid child

"I hear you calling"
A telephone shakes vigorously, perhaps ringing amid an earthquake

"Oh baby, please, give a little respect to me"
Andy Bell and Vince Clarke frolic around some massive letters, which are not yet fully apparent but we can probably guess

"Oh baby, please, give a little respect to me"
The camera pulls out and we can see Andy Bell and Vince Clarke hanging round some absolutely huge letters spelling the word RESPECT, shredding any vestiges of meaning from the word "little", and finally leading to a letter-stealing Vince taking the "P" in what is perhaps the best metaphor of the whole video

Email ThisBlogThis!Share to TwitterShare to FacebookShare to Pinterest
Read more on: erasure, video