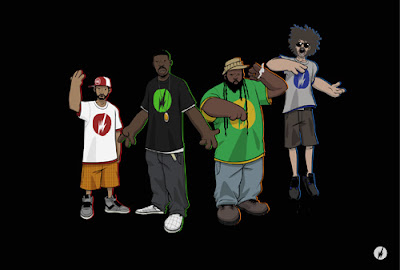 It's easy for me to parp on about Warp Records all the stupid time, but there's another record label that is becoming a keystone of modern electronica.

Brainfeeder is the, er, brainchild of Flying Lotus, a Los Angeles producer about whose great aunt Paul Weller once wrote a song.*

Mr Lotus, or FlyLo to his chums, started Brainfeeder as radio show back in 2008 on Dublab, a not-for-profit internet radio station set up by students. The 'feeder mission, "we are here to feed brains," was reassuringly simple, and like a lot of good radio programmes, it was an excuse for FlyLo and his mates to play their own music and the music they loved.

Already with a toe in the door at Warp Records thanks to the Reset EP (used by the Adult Swim cable TV network, which means bugger all in the UK but is a big thing in the States), Flying Lotus was about to step into much bigger things.

His 2008 album on Warp Records, called Los Angeles for blisteringly obvious reasons, had other music producers salivating over his complex, urban instrumentals. I even got drooled on by HMV staff when I bought it on CD (their dribble is like acid: it stings).

As FlyLo increased his knob-twiddling respect levels to 11**, Brainfeeder morphed into a record label. Bolstered by a distribution deal with the legendary imprint Ninja Tune, the 'feeder now boasts Ras G, Lorn, Matthewdavid, Daedelus and the Gaslamp Killer among its roster.

In fact, Daedelus's forthcoming Righteous Fists Of Harmony EP is the label's first put-out-the-bunting and stick-the-kettle-on release: it should propel them into the bleep-o-sphere.

Brainfeeder is exciting because the music is so fresh and so clean. Ain't nobody dope as them. And it's a great complement to the Glaswegian DIY electronica scene championed by Hudson Mohawke and the LuckyMe collective.

To wrap your ears around Brainfeeder goodness, this Red Bull Music Academy show is a good place to start. Or FlyLo and the Gaslamp Killer's Christmas present to everyone is also worth sticking on your iPod. Meanwhile, it's not at all long until Flying Lotus' droolworthy third album Cosmogramma is released on Warp Records.

But then, I'm not parping about Warp, am I? I thought we'd established that.

* Song For Alice (Dedicated to the Beautiful Legacy of Mrs. Coltrane) from Weller's 2008 album 22 Dreams (Mrs Coltrane being FlyLo's great aunt and wife of John Coltrane).

** This is not, as you would expect, a nod to the classic rock spoofudrama Spinal Tap, but instead it is an endearing tribute to the maximum volume level on the BBC iPlayer.

re: footnote 2... isn't it a mockumentary rather than a spoofudrama? (let's face it spoofudrama sounds like a poor 1980s fast food chain.. I seem to remember one in Picadilly Gardens)

re: footnote 2... isn't it a mockumentary rather than a spoofudrama? (let's face it spoofudrama sounds like a poor 1980s fast food chain.. I seem to remember one in Picadilly Gardens)

If you pre-order the cosmogramma cd from bleep you get a piece of shiny card with the inlay as a special treat. I did this because I'm dead cool and that.
The vinyl comes with 'velum inner sleeves' apparently, slurp.

JP - it is definitely the greatest example of pretendovision there is.

Nibs - I love the idea of FlyLo fans being wowed by a piece of card. To be honest... it's working on me. What the fudgecake is velum?!

I don't know but I'm definitely interested in it

I want to touch it. I don't know what it is, but I definitely feel that I need to touch it.