A LoneLady among these dark Mancunian mills 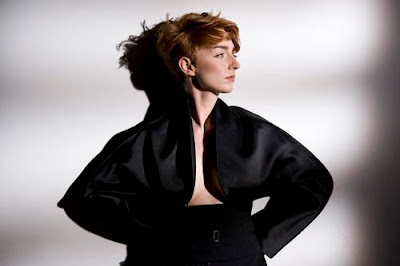 Warp's wicked love affair with the guitar continued recently with LoneLady's debut album Nerve Up (LoneLady pictured above). I always wondered what happened in those smashed-window remnants of Manchester mills... well, here's the result.

Nerve Up is low-fi and immediate like the xx, and like that album it carries off the impossible task of sounding retro and fresh. Hear, if you will, the spirit of The Fall, Cabaret Voltaire, Joy Division and, to a larger extent I think, Gang Of Four, and yet it somehow explodes with potent energy.

Intuition is the immediate post-punk classic here, while If Not Now has the insistence of Tricky vocalist of Nicolette set to an unashamed '80s vibe. And she's not afraid to speed it up either, with the stomping disco of Army and the jangly, hand-clappy Early The Haste Comes.

Sharing a producer with My Bloody Valentine certainly helps LoneLady's album groove and ride and wiggle its way into your memory. Much of the record is reverbed to hell, I guess to reflect the huge mills in which it was created, and so adding a nicely apocalyptic touch.

My concern is if Warp can't convert this album into a sure-fire smash hit (the xx broke the top 40 last summer), what hope is there for any of their artists? I insist, dear reader, that this album is your guitar-rock purchase of the year.

One for the guitar-phobic, now, and an album that is as equally atmospheric as LoneLady's long-player. Loscil's fifth album Endless Falls will envelope you, smother you and send your fuzzy mind spinning into that joyous place just before you drown with suffocated lungs.

Seven tracks of warm, glitchy looping ambience (nine tracks on the vinyl) make way for an epic closing piece of, um, spoken word poetry. Not a single string section, not the tiniest crackle, not a single moment of muffled melancholia is out of place on this beguiling ambient highlight of 2010 and a true successor to Global Communication's early work.