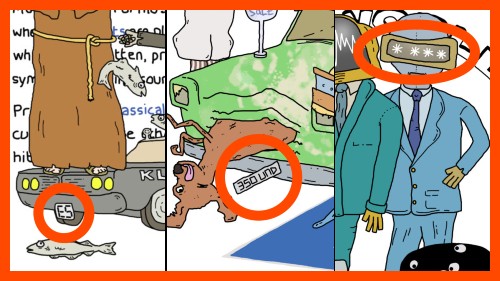 I still remember discovering it on the shelves of WH Smith. "Oh look, it's on the shelves," I blurted while pointing as hard as I can at their music magazine section. "Look, everyone, there it is." I pointed with two outstretched arms but the commuter drones queuing for their daily paper and expensive chocolate weren't looking at me. "I'm in that! That magazine there! Hello? Hello?" Turns out strangers don't like it when you shake them by their lapels.

Writing my column for Electronic Sound is the longest job I've ever had. The magazine started as just 'Electronic', no doubt named after Bernard Sumner's best band. It has been iPad-only, a digital edition with interactive buttons, but most of all it has been a gorgeously produced print magazine. My column has featured in every edition. It's amazing what an steam-powered automatic sentence generator can do. I've been illustrating it since early 2020, a move which single-handedly brought on an international pandemic.

The column is still going strong, as are my "illustrations" (which are actually high-resolution 4D photographs, they just look like cartoons due to the limitations of the human eye). The mag has exciting plans for the future, and I'm happy to say I'm now part of Electronic Sound Premium. This means that, by pressing a few groats into their palm, you can read loads of my columns. They've given them titles titles like 'Unnecessarily Repetitive', 'Why Am I Not A Famous Novelist?' and  'I Am So Very Good At Kicksporting Football Soccer'.

Writing for Electronic Sound continues to be great fun. The columns come easy (although they're often second columns having written a burner column just to get to the "good" stuff). The illustrations are harder, especially as I never write the columns with an illustration in mind. I like to test myself. I occasionally sneak in references to the magazine in my cartoons, sometimes in number plates and sometimes as morse code in a Daft Punk visor (see picture). I also write features and reviews, and scrawl "FRAT ROLEND IS TH BESST" on every page in invisible ink.

Big up to Push and the gang for continuing to publish and, worryingly, encourage me. I'll finish this with a beautiful poem. It's composed from bits of first lines from some of columns. Imagine you're reading Shakespeare or Carol Ann Duffy or a crossword. In the meantime, you can subscribe to Electronic Sound's digital and print editions here.

Picture the scene
We’re all going on
a summer holiday
Tossing
Electronic music
is far too sexy
This is Geoff
Old Blighty
the drug of the nation
Cymbals
Filters
More tossing
Thought you’d never ask
Gird your Union Jack cummerbund
Cancel culture has gone too far
On the first Friday of every month
Stick your finger
in a page
of this magazine
Great Uncle Albion
With words so good like what this sentence
You think you’re clever don’t you
signing up to
my new social media network
Did I ever tell you
about washing powder?
Land O’ Bowler Hats
you’ll no doubt remember
I am ill
Oh
Flaps