Knobs, cocks and boils: my review of the year 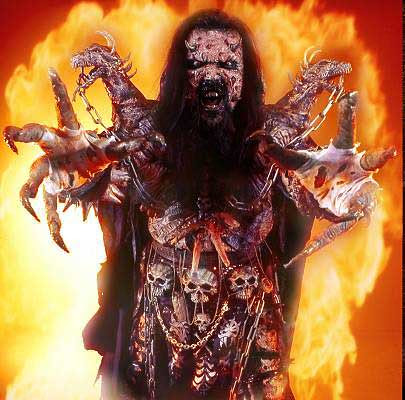 Wensleydale, as it is every year.

> The most wonderful public figure of 2006

This is a difficult choice; 'wonderful' is not a word I would use to describe most celebrities. Lily Allen was both 'street' and pedestrian, while Chantelle and Pete Doherty were either OMG like sooo cool or complete morons, depending on your take.

We were forced to think about Chris Tarrant and Mark Oaten's sex lives (not together, although they would make a delightful couple). Michael Richards and Mel Gibson destroyed our faith in Seinfeld and Braveheart respectively.

Tony Blair and David Cameron annoy me so much, I want to gnaw the back of my knees off. Paris Hilton, Catherine Tate and The Feeling are also boils on the bottom of life I want to lance with the needle of justice.

In fact, the only public figure that didn't want to make me grate my eyeballs and syringe them back up my nose was Mr Lordi (pictured), whose band stormed to a well-deserved Eurovision success with this glorious number.

I think butter just about edges the victory here, over the bed and door variety.

Bond took a menacing turn for the better, but I still can't take those films seriously. I missed any films to do this year's overriding theme of animals and planes, so I lost out on United 93, Snakes On A Plane and any one of the million films about penguins. The Departed, Superman Returns and Children Of Men were pleasant surprises, and A Cock And Bull Story made me giggle lemonade out of my nose, if only for Stephen Fry's impressive "cock!"

My favourite film of the year came right at the beginning, as the turkey and stuffing was still swilling round my insides. From the opening bomb explosion, Munich was unsettling and brutish and shied away from moralising, and thankfully avoided the usual saccherine Spielberg fare.

>Near death experience of 2006

Sankeys Soap in the summer. Yeesh. At least, it felt like near death. I'll tell you over a beer some time.

Yes, from my own blog. I really am that vain.

Autechre sell tinny frog-puke enducing cancer machines always seems to come up on Google searches and provoked an anonymous commenter to call my post "a load of sniffle", although the whole post was cheapened by my use of a Dilbert cartoon. My Misadventures In Sound series chronicled my DJing on Refresh FM last Easter, although I never quite finished it. Filter: Beckett & Taylor, Luke Abbott & 000 provoked a respectful mention on a record company website. A little less respectful was It's 3.30am and this is what I think of Da Vinci, which was written in a fury after wasting good sleep over an appalling film. Five things I don't want you to know about me was similarly heartfelt.

I have to plump for the Fatbelt series as my favourite, in particular Fatbelt: notch 3 which saw a whole nation take Saffron the goat to its heart. Well, about three people anyway. My favourite phrase of the year was from that post: "Friday waltzes in to the room like it owns the place." I like that, I must use that again.

Is that smug enough for you?