Will the David Attenborough of electronic music please step forward? 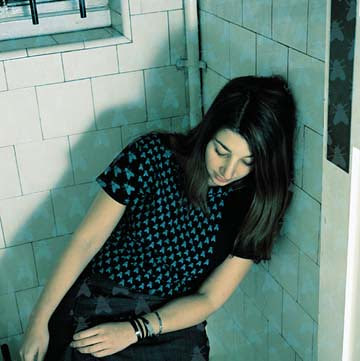 I'm not exactly what you call a man's man, although I fall effortlessly into realms of life traditionally spurned by most no-tails, such as Formula One, modern computer video games and long conversations about early Warp catalogue numbers.

I get as annoyed at male chauvanist pigs as I do at wimmin's libbers who spout things like "typical man!" and "You think that hurts? You should try childbirth." Sexism is from the same root as racism, so if you want to be my friend, keep your petty prejudice to yourself, lest I sulk quietly for three days before developing man 'flu*.

>Women in the field

This blog is meant to be about electronica / IDM music, which is male dominated like most areas of popular music. There are women in the field, such as Goldfrapp, Bjork, a bit of Mum and a smidgeon of Telefon Tel Aviv, but they are mostly standing on the touchlines watching the main action. See? That was a sporting analogy, which is so manly*.

In the spirit of political correctness gone mad, I would like to declare January 2007 as the month that Mira Calix will make it big. She is a glitch artist who dillies with found sound, and dallies with orchestral experimentation.

Her new album will be called Eyes Set Against The Sun, and it features samples taken from her garden. Audio samples, that is; she isn't flower pressing, even though that is very womanly*.

Australia's In The Mix magazine describes her as the David Attenborough of electronic music, and a particular quote from their interview with her (read it here) gives me hope that electronica artists' obsession with audio trivialities is not just a male fascination.

Here's what she says: “There’s a tree near where I live that has this amazing creak all of its own, and every little twig you hear sounds different if you bash it or step on it or rub against it, and because they are different types of wood they all make different types of sounds...

"I made a [musical] piece out of snow melting but it ends up sounding like water running because it obviously turns into water when it melts. Because it was all melting at different speeds and times, though, it sounds bizarre – maybe, to people, it could sound like I just turned the shower on! I enjoyed it, but in the end I got too cold and had to leave my recorder outside and keep popping back. I have no idea why I find it fun, but I do.”

Her childlike fixations sum up my thought processes about most things most of the time, although I'm not sure if that makes me a man's man, a woman's woman or just a Roland's Roland.