Two little boys had two little toys... (me and Lee doing a pub quiz, then) 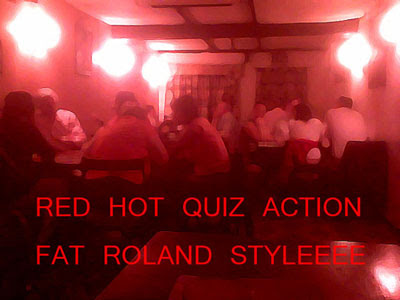 I wouldn't want to distract you from buying new pantalons for your date with me on Wednesday, but here is the latest pub quiz news from the world of Fat Roland.

Here's the music round I foisted upon the suffering public this week. Ogle more quizzery at Nine Tenths Full Of Pingpongs.

I'll splat the answers in the comments hole below this post in about a week's time. And no googling, you flips.

Question one. Rolf Harris' Two Little Boys goes like this: "Two little boys had two little toys. Each had a wooden horse. Gaily they played each summer's day, warriors both of course. One little chap then had a mishap, broke off his horse's head, wept for his toy then cried with joy as his young playmate said--" What's the next line?

Question two. Which musician’s publicity department was known as the Bilk Marketing Board?

Question three. According to his old nickname, what vegetable does Bronski Beat star Jimmy Somerville look like?

Question four. Name the four principal members of the Goons. (Only a music question because the first single I ever owned was by them.)

Question five. So then, Cyndi Lauper. Cyndi is partially from Lucinda, but what does Lucinda mean? (a) Bringer of light; (b) Physician; (c) All-seeing.

Question six. Kylie Minogue likened it to being hit by a nuclear bomb. What was she talking about?

Question seven. Avril Lavigne had a hit about a "skater boy". Spell her his single correctly.

Question eight. Name the men with the surname Stewart that had a hit with the following singles. (a) Donald Where’s Your Troosers; (b) There Must Be An Angel Playing With Your Heart; (c) You Can Make Me Dance Sing Or Anything (Even Take The Dog For A Walk, Mend A Fuse, Fold Away The Ironing Board, Or Any Other Domestic Shortcomings)

Question nine. So, then, Thin Lizzy. Mad Lizzie kept us fit on TV-AM but who was her rival on the BBC? (This is a music quiz, honest. You have to imagine me playing music clips then veering off on a tangent in a comedy stylee.)

Question ten. On Friday June 1, what did anniversary did Beatles fans celebrate?

Question eleven. In terms of their big hit singles, who's the odd one out? Avril Lavigne, Bronski Beat, Cyndi Lauper, Rolf Harris, Thin Lizzy. There may be a clue if you scan over these questions...

Back to planning our date. Were you really thinking of going out in those shoes?

1. Something like "there's room on my horse for two".

3. Rhubarb. Not really a vegetable, you're right.

At least I try.

Sarah, three right. I'll give you Rolf, you're right about Lucinda and your Avril Lavigne spelling is second to none.

Rod is one of the three in question eight, but not 8b, and no I didn't make any of 8c up. You Can Make Me Dance Sing Or Anything (Even Take The Dog For A Walk, Mend A Fuse, Fold Away The Ironing Board, Or Any Other Domestic Shortcomings) was a number 12 hit in the new year of 1975.

What's wrong with these shoes? You don't like them?

I really think those shoes are exactly the right style...

They really match your...

I wish I had shoes that matched my wallpaper.

I wish I had wallpaper.

No, you've just got a wall made out of shit.

Deny it, I dare you.

Gosh, I realised I never posted the answers to this quiz. And this is my most read post of all time (mainly because of lovely people looking for Rolf Harris - yeas, that means YOU).

Q1: Did you think I would leave you crying when there's room on my horse for two.