Faerie's at the bottom of your piano: harpists please stand up and wait 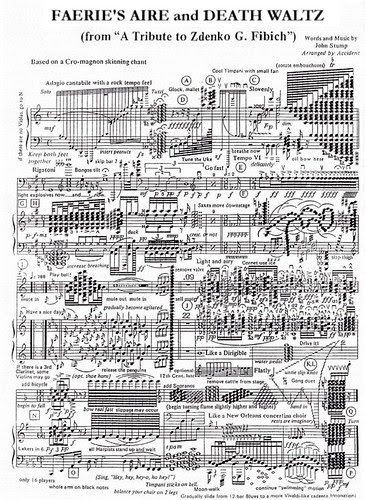 I used to be a musical prodigy, you know.

No, not that kind of Prodigy. Keith and his rave monkeys were always musical, even to the point of getting mashed up with Enya.

No, I was the next Mozart. When I popped out of the womb, I was straight onto those ivories, tinkling them until they were totally tinkled out. My parents booked me lessons in piano and music theory, and, do you know what, I was a bit of a whizz.

But then rave happened. Pianos were 'establishment' and synths were 'underground', so I dropped the classical in favour of amazing Junos that could make helicopter sounds.

Which brings me to the reason for this post.

Faerie’s Aire And Death Waltz isn't a real waltz. It is the most wonderfully ridiculous musical score. I've included it in this post (above), but you can see a bigger version here.

I knew enough about scores to know that andante wasn't a way of cooking pasta. But I'm sure these notations weren't in my lessons, including instructions to "moon walk", "untie slip knot", "release the penguins" and for the harpists to "stand up and wait".

It's frigging genius, which is something I would say if I was the type of person to use pretend swear words.

See more fun and imaginative surrealist scores at Thrilling Wonder. The first person to prove they have played any one of these wins a Fat Roland slow dance.

Did you just shudder?

Email ThisBlogThis!Share to TwitterShare to FacebookShare to Pinterest
Read more on: prodigy, whimsy