If that sounds vague, let me put some hundreds and thousands on top of that metaphorical ice cream for you. We have DJs play non-guitar-based music and we festoon a dizzying array of themed projections and games around the place, while punters drink beer and laugh about the internet.

The theme this time was ABC / 123. Here is the story of that night through the magic of mobile phone pictures, pictures, pictures... (Blogger: an ability to look up and tilt the blog into a cloudy dream would be useful for moments like this.) 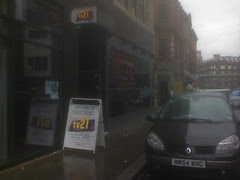 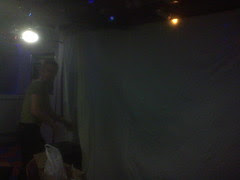 We arrived at our venue, Manchester's glorious TV21, in the pouring rain. The raindrops were quite literally the size of planets. We were offered the use of an umbrella by caring bar staff, but of course we scoffed, being hard and that.

TV21 is a very well equipped venue. It's nice to be able to have equipment that doesn't fall apart upon being breathed at, and to have a room which allows for awkward wire routings and ceiling-hangings.

The first challenge is finding places to project onto. The basement of TV21 is bright and jazzy with swirling lights and Dr Who monsters hidden in unmentionable places. It is also quite cluttered, so we set about covering a wall with a sheet. This would have the equivalent effect of sticking a single Elastoplast onto one of Hannibal Lecter's victims, but you've got to give it a try.

Above, you see Fil nimbly putting up said sheet. You can tell he camps. 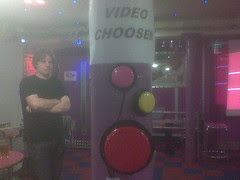 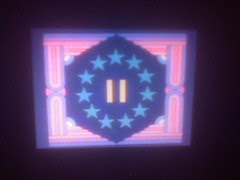 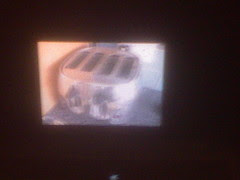 We then wired a laptop to three large, round buttons. Pressing a button chooses a video. The videos were a magificant mix of Sesame Street and geeky Youtube vids about things beginning with the letter T (tights, tablets, toaster). We projected this onto the Elastopl-- er, the sheet. 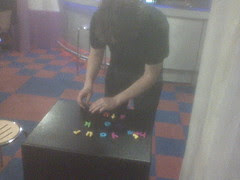 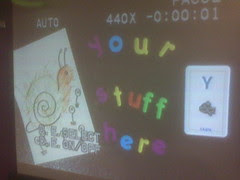 Here you see Stephen creating art, like God playing around with ideas in Genesis ("now, where should I put this sausage thing?"). The multicoloured letter box was then rigged with a camera and projected onto the other side of the room, so people could create 'art' in real time.

You will see some of those 'artistic creations' in another blog post in the next few days. 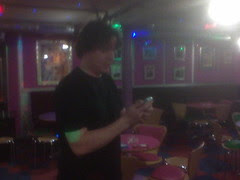 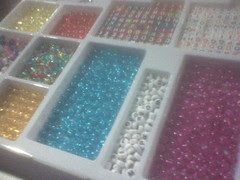 Stephen was our enterpreneur for the evening. He flogged bead necklaces for 50 pence a throw. The bead set cost us £10 and we made £10 back. It might not impress Alan Sugar, but I'd hire him. 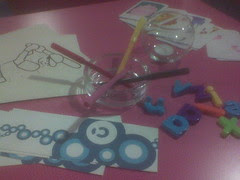 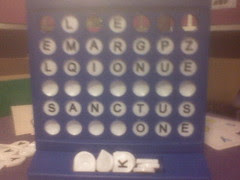 And finally, we bedecked the tables with various letter-based games. And yes, the game pictured above (Letter Link, £7-ish, Woolworths) is exactly like Connect 4 but you have to spell words rather than match colours. Richard Whitely will be frolicking in his grave.

When I say "we", I really mean Stephen and Fil because they did all the hard work while I barked orders and acted like a primadonna disc jockey.

So how did it go? The second half of the story will appear on an internet near you in the next few days.