A ticket to ride: bumbling into MC Tunes and putting the green suit away 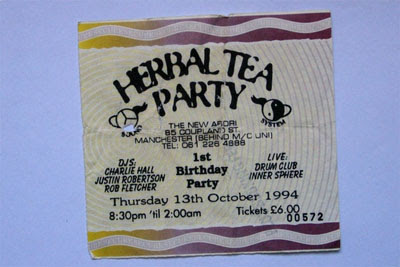 She bounces up to me like Tigger on catnip and starts squatting on the dancefloor. Her bum is pointing in all directions at once and, with alarm bells clanging in my head, I scan the room for a precautionary mop.

She says to me, "You need to dance with your hips. Like this."

For a scruffy haired loser who shuffled around in a painful green suit and wine red tie, a dancefloor was very much like a barbeque is to a penguin; it was a new thing to me and the heat was causing chafing.

It's the Herbal Tea Party in mid-90s Manchester and I'm being taught to dance by an enthusiastic stranger. I must have looked as stiff as a door if I needed a punter to dive in and rescue me from complete humiliation.

The Tea Party stands now as a monster club night in darkest Hulme that has never enjoyed the continuing exaltation of its bigger counterpart, Manchester's Megadog. It's a shame, especially for HTP's very own Dr Frankensteins, co-creators Ian and Rob Fletcher.

Thanks to them, electronic music bowled me clean over, especially when:

(a) I bought Orbital's brown album purely based on an amusing review in the NME;

(b) as a hack, first interviewing one of the Fletchers (I forget which one) but being drawn by a One Dove record playing in the background. I'd never heard proper, creative dance music before, barring the KLF, The Orb and assorted chart rave bands.

There isn't much about the Tea Party on the internet near me. A few forum mentions, but then this gem of a photograph (above).

It's a ticket, posted by Armcurl. It shows (then) South Manchester's finest DJ Justin Robertson lined up beside Charlie Hall and his Drum Club. And there they are. Resident Rob Fletcher plus Inner Sphere Space which, if I remember rightly, was his brother Ian.

Okay it's just a ticket, but this photo represents my bumpy (and grindy) ride into the clubbing world.

I never really became 'cool'. I was frightened by the owner of Birmingham's Beyond club once because he offered me a beer. And I once bumbled into MC Tunes, who threatened my very life just by casting me what he thought was a casual glance.

And I never got into tea either, despite the best efforts of Mr Scruff to make it the tipple of choice for Manchester clubbers.

But I did learn to dance a bit, and the Herbal Tea Party turned a scruffy haired loser into a shaven-haired loser with a penchant for Higher Intelligence Agency, Drum Club and Sabres Of Paradise. Thank goodness I never needed the mop.

Oh, I do enjoy reading your blog. I have very fond memories of One Dove, although possibly not the memory outlined in this post.

I want to learn to dance Fats style!

Patroclus, you have changed my image of One Dove forever.

Nat, I'll fly over and give you lessons. It involves drinking lots of beer, falling over and swearing too much.

Oh, don't go out of your way for me. I'll meet you over there! Can this be done with wine? Beer smells bad.

Ian Fletcher's band was called Inner Space, played at the Tea Party a couple of times as well at Phoenix Festival. He later went on to record several excellent 12s as Psyche-Out. Inner Sphere were Dave Hedger and Lindsay Edwards,who released stuff on Sabrettes, including one classic track "Let's GoTo Work", (featured on Pink Me Up, a Sabrettes compilation) and played by Weatherall on several occasions at the Tea Party.

Thanks for the correction, Ali. I've some extra music to go seek out now!

Just stumbled upon your use of my ticket (via technorati). Head on over to the herbal facebook group at http://www.facebook.com/group.php?gid=18795022952