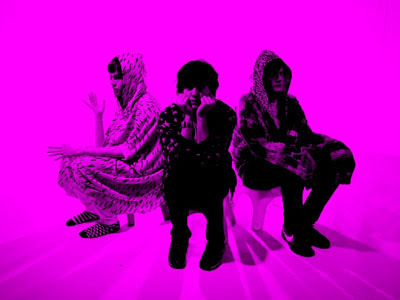 The Klaxons once got caught pouring treacle down Gloria Hunniford's cleavage while dressed in inflatable saxophone suits as they supposedly prepared for a Dadaist sound poem version of J B Priestley's An Inspector Calls.

Such revelation should come as no surprise here on the Fat Roland blog. On a July post with the beguiling moniker I'm quietly rooting for the Klaxons but this is a post about Fopp's flopped shops and not the bloody Mercury Prize, I not only suggested HMV could invest into Fopp (they did), I plumped for the new rave protagonists to win the Mercury (they did).

This makes me into some kind of messiah, so it seems shrewd to spread my insight and present my top ten of fascinating facts about the Klaxons.

(If you're not quite sure what a top ten is, it's the kind of thing bloggers post when they don't give an arse about their blog any more. Before you worry, I do give an arse, sometimes at half price.)

The treacle saxophone thing can't count as fact number one because I may have made it up. I do know, however, that they are the fourth biggest band ever to come from Dumfries and their Golden Skans single is something to do with x-ray machines and urine.

Fact number one: Steve Lamacq is a former member of the Klaxons but was politely asked to quit because of his boy band looks.

I've checked Wikipedia, and neither of those facts are on there. So let's just rewind:

I can't do this. This is a post about the bloody Mercury Music Prize. Fact one: The Klaxons won it. Facts two to ten: The Klaxons deserved it. There, that'll do.

Minus ten Roland points for any journalist who concludes his or her article promising great things for the band with the derivative final line, 'it's not over yet for the Klaxons'.