Store Street blues: waddling with the scrotes, the clubbers and the tokers 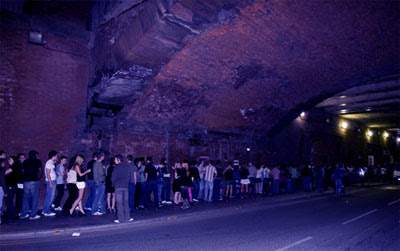 I'm trotting under a brick-clad bridge down what feels like a road to oblivion when a wiry scroat of a man asks me for money.
Or rather, he asks me for the time. Then money.
I put on my skint face, apologise and walk on. He summons all his fury and describes what he's going to to with my skull if I don't cough up cash.
With a dark but open street ahead, I hurry on to safety with his threats ringing off the brickwork behind me.
Store Street has never been my favourite road in Manchester. I have to make it safe somehow.
If only I'd had The Tattooed Bouncer with me. He was a vicious looking gentleman with ink all over his head, and he impressed me once at a Plaid gig by dragging a casual drug toker out of the Music Box by his throat.
When I say 'impressed', I mean 'terrified'.
But sadly he has died, a claim the deceased bouncer has since owned up to according to local news reports. Fat use for next time I waddle down Store Street.
Here's another idea for making Store Street safe. When there's thrills and pills in abundance, you don't get threats of violence, so maybe someone would be kind enough to convert the street into a clubber's paradise.
Maybe, just maybe, we could bribe some of the great names to spin some plastic mp3s: Armand Van Helden, Layo & Bushwacka!, Dave Clarke, High Contrast, Jeff Mills, Aphex Twin.
I'm free this weekend, so it could run from then until, say, New Year's Eve. It's a crazy idea, and it will never happen. Hold on, the phone's ringing...
...yes? Store Street, yes. Behind Piccadilly train station.... they're doing what? The Warehouse what?
It seems my Store Street blues are over for a while. Maybe now I could walk arm in arm / headlock with the Deceased Bouncer, with scroats fleeing in the other direction down my brick-clad road to oblivion.
Thank you, Warehouse Project: you are about to make the city a more magical place.