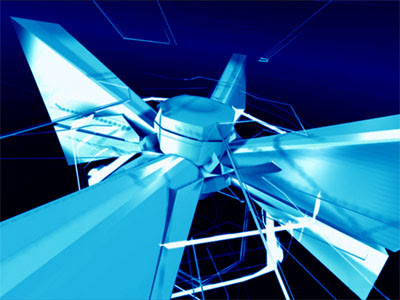 The internoggin is abuzz with the activities of Sean Booth and Rob Brown, known to head-nodders everywhere as legendary Manchester bleep merchants Autechre (video still pictured).

They named themselves after hammering random letters on a keyboard. By that logic, I ought to be called Diohsihasd rather than Fat Roland.

My semi-bearded pal Fil once blue-toothed me a great mobile phone background with two huge curvy letters 'ae', which as any fule knows is the chemical symbol of Autechre.

The file corrupted somewhere in the ether between our phones, and a single solitary extra black dot appeared on the image. This accidental progression made it true to the incremental changes in loops typical of the band's music, and we knew a great big techno god was watching over us.

Anyways, as an old American friend and fellow Homestar Runner fan always used to say, anyways, they have a new album out. It is called Quaristice and is available from all good thingies.

If a new album isn't good enough, you should also download the 30 minutes of rich techno they spewed out on Mary Anne Hobb's Radio 1 show. Discover this at Acid Ted or at Fried My Brain 1.0.

While you're there, if you look really hard, and I mean proper hard, as if you're looking for the guy hiding behind Wally, you will see links to their marathon February podcast.

I enjoyed the uber-cheesiness of some of their song choices, despite my decrepit internet wires committing suicide every five minutes, abuzz or no abuzz.

OK. I know that these words are in English. In fact, the words 'lovingly hand-crafted' would not be out of place.

However, I'm struggling to understand any of them. Is that wrong?

I'm sorry, I have absolutely no idea what you just said.