Ever decreasing memories of lifted bosoms and a DJ Shadow dump 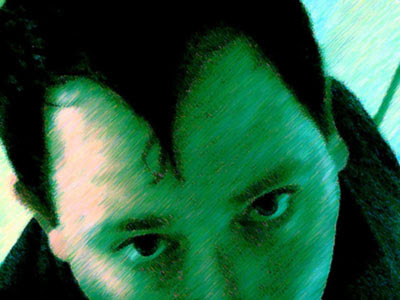 Edit: no wonder this post was so nostalgic. I've just realised (a month later) this was my 200th blog post. Hurrah! Light a candle or summink!

Ten years ago I flipped my first disc onto a spindle in public. I was rocking big beat in a rough bar. I broke the decks. I bombed.

But Fat Roland (yes, that's me pictured) was born unto the world, and the rest - as they allegedly say - is hysterical.

My head is seeping with memories as I think back through my decade of DJing. Little snapshots.

Electrical tape, perfectly parallel, pretending to be Tron lines on a floor. Long, smooth, edgy drum 'n' bass mixes and my DJ mates nodding in appreciation. Deciding to dump the beatmixing for John Peel-style weird track choices. My mate Fil signing the letter T when I play something he liked.

Sweating in a hooded top as I played the 'cool DJ' role with a bunch of energetic South Africans at Manchester Apollo. My wedding DJing phase, oh my wedding DJing phase. Lifting someone's ample bosom, two handed, from the needle-knocking danger zone. Lending my decks to LTJ Bukem's former musical partner and learning to mix jungle just by watching.

Some record label guys thrusting a pure white, unlabelled 12" at me - and my joy when I realised it wasn't crap. The sunshine last August and the couple dancing near the front. Beat-mixing at a skate park five gruelling hours a day over ten days, which included putting on a long DJ Shadow track while I had a poo. Being chased from Rusholme with said chum Fil, covered in wallpaper paste and flyposters.

I have slowed down, like an 80-year-old driver. Work is my steering wheel, and I just can't get enough cushions of spare time to rise me high enough to drive (by drive I mean DJ) safely (by safely I mean often). I'm tempted to delete that last sentence, but no, I'll just keep typing. Be damned.

I now find myself working three doors away from my first ever gig, and Facebook has put me back in touch with some of my pals from that time.

It all comes full circle. Like a record. Although not in ever decreasing circles, like what a record actually does. That would be depressing.

You know that cliché about the number of babies who were conceived to the music of Barry White? I want to know the volume of poo deposited by DJs during the full-length version of Kraftwerk's Autobahn.