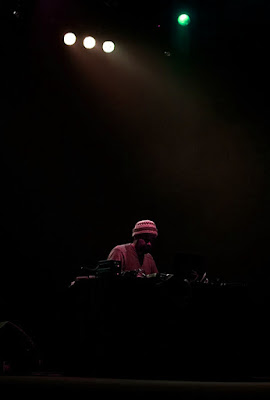 Murcof's latest gig was so good, my eyes were crushed underfoot and smeared all over the wrecked remains of my eardrums.

The abstract minimalism of Mexico's premier glitch artist was accompanied by specially commissioned visuals from AntiVJ at the opening night of Manchester's Futuresonic festival.

And what visuals. A ball of shining dust throbbed and burst into an insectoid terror, at one point exploding with such ferocity, half the audience phoned their mummy. A grand vista of the universe, falling like fairy dust on the wide-eyed punters, swelled into an intense three dimensional world of amorphous galactic star clouds. Blue vertical lines harped and bowed, harsh squares graphed across the width of the stage, and dozens of hearts lurched as a black hole threatened to explode from a seething cloud of white light.

Murcof (photo by Conny Fornbäck) were no less impressive.Death Of A Forest's horror-film chords drew cold fingers up spines (copyright: every horror writer ever). Cosmos 1 or 2, whichever one it was, sounded organic and reedy then thundered to a grandious crescendo. The thin, snapping beats of Cielo and Mir sliced through the RNCM's pristine sound system, and each bass drum kicked harder and deeper than the last.

Support came from Johan Johnannsson, who I could take or leave with his basic string quartet / piano / loops set-up, and Denis Jones, who bristled with beardy beauty as he delivered a folktronica set that was simplistic in intention but full of complex twitches and layered samples.

I was there, I was completely blown away by Murcof. Utterely transfixed by the visuals. One of the most impressive sets I've seen!

I know. Mind-blowing, wasn't it? The visuals just seemed so... big.