Diving into my first full day of the FutureEverything festival was like springboarding into a swimming pool of motherboards, microchips and pliers. It looks different, but it's painful on first contact and is difficult to navigate through.

It was certainly a far call from my last trip to the event when it was called FutureSonic and it had weirdos circuit-bending into Gameboys at the Contact Theatre. Now, it was all about data, meta-data and, um, whatever comes after meta-data.

Still, for every couple of sessions that befuddled me, there was one that pricked my ears. I learned about 'things that no longer exist', which talked about objects being made up of the real world and the data world. For example, an Oyster card is partly physical card but is mostly invisible data.

And so we had objects made up of material and memories (a stripey pink jumper with a barbeque smell), to Poltergiest (the film, not an actual one) and Heidegger's profound observation that the "Old High German word 'thing' means a gathering."

The Guardian did a couple of sessions. One, about data and journalism, reminded us that it's all about people and not just machines, although the people in this instance provided a disorganised and dull seminar.

Another session, about robots and editors, was brilliant and equated Trip Advisor reviews with stepping on other people's experiences, declared that robots were evil and had a magical rainbow-vomiting panda.

Anyhoo, in the evening, I went to see Fucked Up. It was an alarming mixture of extremism, love, danger and inclusivity. I'd liken it to the best rave moments at Sankey's Soap and, I think, solidified Islington Mill's reputation as one of the best venues around.

That is, if the venue still exists. The audience insisted on trying to pull the roof down (hence the lead singer's worried "guys, those are water pipes" announcement near the end of the show).

Not much to photograph today, but here goes... 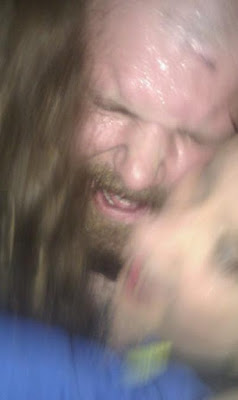 The Fucked Up lead singer spent most of the time grabbing the crowd, including me. This photo is by Andrew Fisher. 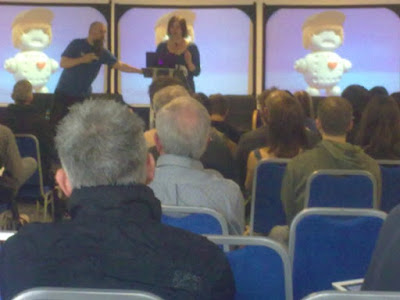 The magical rainbow-vomiting panda pair had some brilliant visuals. 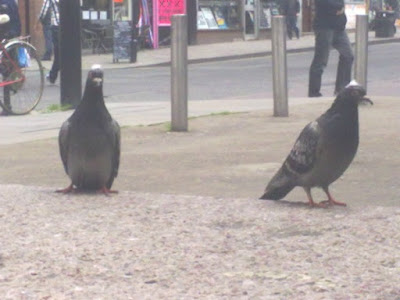 Look! Punk pigeons in the Northern Quarter!  I told you I didn't have many photos. 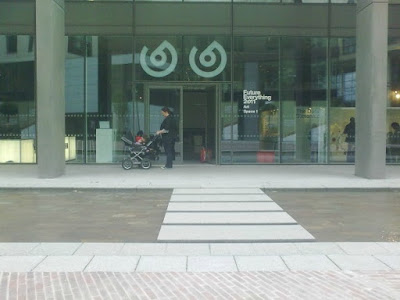 Now I'm getting desperate. Honest, there'll be more photos on my next FutureEverything roundup.

Email ThisBlogThis!Share to TwitterShare to FacebookShare to Pinterest
Read more on: fat roland everything

Nice. I'm pleased to see you weren't enamoured of some of the speakers... neither was I...

I think with anything like this, you get good speakers and bad speakers.

Keep an eye out for my next couple of posts on FutureEverything...

As usual, a saner head has prevailed... You're right of course, I really should have blogged positively about the music and art instead of just focusing on the speakers. They just really get my goat, though!

Hope that clears things up!

But surely it's not 'meta' then another 'meta', but it should be the word 'meta' *inside* the word 'meta', so it's truly meta, therefore you end up with 'metameta' reading as 'memetata' and 'metametametameta' as 'memememetatatata', which is the noise I make when someone offers around a free drink.