This Thursday's Flash Mob Literary Salon sounds posh. It is, after all, in Chorlton.

For those unaware of this trendy suburb of Manchester, Chorlton invented cous cous, bags-for-life and gormless dragons.

However, the Flash Mob Literary Salon is not posh because I had a hand in organising it. And my hands are dirtied from moss, tree bark and lichen. They are gnarled, like an old woman's eyelids. 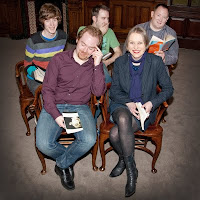 Let me tell you a story. Of how the Flash Mob Literary Salon came about. Once upon a time, on a dark and stormy night, I ran a writing competition with some friends. They were Benjamin Judge, Lonlonranch, 330 Words and Words & Fixtures, Lots of people entered. Two weeks ago, we shortlisted 12 entries.

This Thursday's Literary Salon is the awards night, in which the shorlistees, along with me and my friends, will be reading their stories. Nik Perring will be our guest reader and we'll reveal the winners of our competition in a glittering ceremony. The end. Everyone lived happily ever after.

If you haven't seen me seize a stage before, this could be your chance to capture the full theatrical Fat Roland. In recent months, I have taken to short stories like a pelican to an oil slick. Bad Language have kindly allowed me to do several performances in which I have distributed toothpaste, taped a story to my chest and thrown my reading material, screwed-up and useless, onto the stage floor. (Do go to Bad Language's anthology launch tomorrow.)

My favourite pieces include 25 Words About Supercharged Beyonce, which does what it says on the tin, Sometimes In Life It Seems Like You Have Choices, which was inspired by a vision I had of bunnies cascading off a buffalo's back, and a story about a newly married couple and a boat-building tenant which should be turning up on Gumbo Press soon.

You can my stories at Bionic Matthew's Pen Of Doom (although some of the earlier ones are a bit first drafty for my liking). And if you would like me to come to your short story night, you can book me here.

Meanwhile, I will see you at the Flash Mob Literary Salon, which is not posh, this Thursday 7.30pm-9.30pm at Dulcimer in Chorlton. It's part of Chorlton Arts Festival and will be broadcast on Chorlton FM, so stick that cous cous in your pipe and smoke it.

See also: the time when we tried to start a literary scene