Brummie music thinkbod Andrew Dubber recently railed against the habit of hacks writing off 2011 as the ‘year of boring music’. He argued that it said more about the paucity of stimulation in the journalists’ lives rather than a lack of good quality music.


“I suspect that it is not our musicians that have let us down, but our champions of music.

"So if your job is to report upon popular music and you are unable to find ten incredible things in the past year to share with those of us who still read what you have to say, then that makes you a failure.”

“John Peel-ism should be the norm,” he added.

Let me extend that thought. If you’ve ever liked a YouTube music video then left a comment declaring old music to be way better than the mulch that is spooned down our gullets today, then you might as well piss all over John Peel’s grave, suck up the urine from the soil, wait for it to digest, then take a second slash whilst banging on about how the first piss was a nicer shade of yellow.

My difficulty was not finding ten incredible things, but narrowing it down to an arbitrary number that inevitably led me to exclude something quite important....

...James Blake’s album James Blake (Atlas). The most important underground electronic music artist of the past year is not in my top ten, despite me doing everything I could into tricking you into thinking he was Album Of The Year at the end of my previous post. Sorry 'bout that.

Last December, I indicated the excitement that preceded his debut album. When it finally came it, I felt it was playing to a quite different audience. An intricate album full of beautiful bass that even caught the attention of Beyonce – but there were ten other incredible things I wanted to share more than Blake's LP.

Other also-rans include new kids on the block, Cant. I found their album Dreams Come True (Warp) too band-y. I believe the monumentally entertaining Ceephax Acid Crew had an Unstoppable Phax Machine (030303), but I didn't get the memo, whilst there was no space in the top ten for the industrial glory of Byetone’s Symeta (Raster Notion) nor for Brian Eno’s poet-poking Drums Between The Bells (Warp).

Which only leaves one thing: a young Glasgow musician who’s brandishing something long, transparent and deadly. It’s a glass sword. That was a reference to a glass sword. Not his penis. 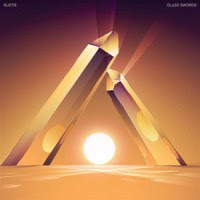 The arpeggiated mayhem of Zig-Zag was the first moment beat-nuts took notice of Rustie. With that track and the 2009 highlight Bad Science EP, he very much sounded like a kid earning his dues in the Lucky Me collective’s electronic workshop.

Meanwhile, his mentors Hudson Mohawke and Mike Slott lead the way for the Glaswegians with, respectively, the Butter and Lucky 9Teen albums. Rustie, perhaps, sounded like the talented apprentice playing with the Nintendo in the corner, biding his time until...

It brings to mind the retro synth mischief of Lorn, whose 2010 debut sounded like a naughty Knight Rider breaking into the Blade Runner film set. Rustie’s debut takes that philosophy much further. If Lorn was Kansas in black and white, Glass Swords is so far over the rainbow, it has hypercoloured the sun itself. 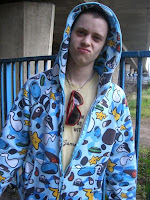 This is the sound of a young pretender dicking about with his software, which would be really annoying at a party, but committed to record it is a joy. He pumps up the Hudson Mohawke beat aesthetic until it bursts.

All Night is a soul jam at the most disgusting sex party ever to be held in your bass bins. Hover Traps is simply the catchiest tune of 2011, Globes sounds like drums crashing against the dawn of time, while After Light throbs with so much minor chord desire between the cut-up voices and blistering bass, you’ll be writing love letters to Glass Swords well into your pensionable years.

Every synth crunch on Glass Swords is a Glasgow kiss that requires, if you so please, your full bleeping attention. And it is all underpinned with a crystal-clear balance of melody and emotion. It feels to good to have Rustie battering my ear drums. You know how you can get fish to nibble your corn-encrusted feet in pretentious shopping centres? In this case, your feet are your ears and instead of fish there are nice things like pies and ice pops and bacon Frazzles.

Which reminds me, I’m hungry. Rustie's Glass Swords is my Album Of The Year 2011 because it matters and I'll be humming it in a year's time. Do have a listen below. Thank you for reading my blog in 2011. It has been an extraordinary year in many ways, and none of it would be possible if lovely people like you didn’t dip your eyes in my word sludge every now and then. Let’s do the same in 2012, only more ridiculous, more unrestrained and with more bacon Frazzles. Did I tell you I was hungry?

i bought glass swords because you said so, and like it a lot. it's like eating a lot of sugary stuff [in a good way]. or daft punk in a smashed mirror. my chief complaint is just that everything's so short - i would be happy with most tracks at double the length.

i also bought symeta because bleep said so, and i like it a lot too. the cover told me i would. it isn't like a lot of sugary stuff or daft punk though.

Heh. Daft Punk in a smashed mirror. I like that. There may be a few people out there that buy stuff because I recommend it. It's scary because one of these days, I'll suddenly start recommending Westlife and One Direction and we'll all be stuffed.

by the time you do that, westlife and one direction will be so far in the past they'll be cool