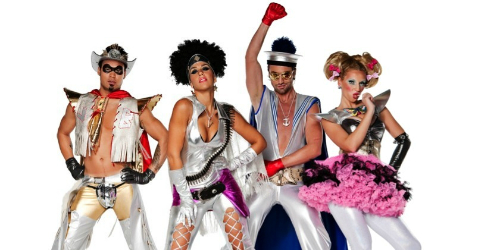 One! Listen to loads of cool Icelandic bands. The stuff music journos call "crepuscular". This will turn your brain cogs to ice cubes.

Two! Neck a load of illegal pills. Y'know, the kind that have Shaun Ryder's head imprinted on them. Take off your shirt. Pretend it's 4am in a club and start a fight with a bouncer / any fat guy you see.

Four! Embrace the Ibiza weather and produce a novelty chart hit. You will need a bouncy beat, sheep for the video, a traffic warden saying "techno" over and over to a camera, loads of pilfered samples and, of course, comedy shades.

Five! Attend any stadium techno gig. Secreted on stage they'll have a couple of fans, to keep them and their equipment cool. Nick the fans mid-set. Knock over their laptop. Nudge the mains switch. And run like heckers because the Chemical Brothers *will* kick your face off.

Twelve! It is only scorching because your love of techno is bringing hell on earth. Placate God's judgement by listening to more holy music genres, such as hymns, country and western, prog rock and trap.

Seventy! Become the Vengaboys (pictured) because when the sun finally explodes and life on earth withers into the great beyond, their faces are the last thing any of us will see. That and they're always dressed for the summer.