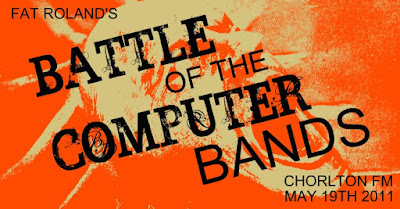 Edit: Voting is suspended. No more votes on the blog, please. You can next vote tonight by contacting my radio programme from 8pm - 9pm, with the grand results being revealed from 9.30pm. Tune in to find out how.

If you know your Aphex Twin from your Orbital, then please take part in my poll.

Battle of the Computer Bands is a grand survey for my radio show in May. I'd like your list of who you think are the most important electronica artists of the last 20 years. A top five, decided by a points system, will be revealed on my radio programme, with some voters getting namechecks on air.

For details on how to vote, read on.

What you're voting on

When deciding on the most important electronica artists of the last 20 years, think of electronic music of the techno / IDM / Warp Records tradition, so no chart-topping pop / autotune pap. We're talking armchair techno onwards (1991 was the year of Orbital's green album, and a lot has happened since). It's not just about your favourites: think consistency and influence as well as general level of amazeballs.

My top artists would, for example, include Orbital, The Black Dog, 808 State, Flying Lotus, Underworld, Mu-Ziq, Aphex Twin, Burial, Autechre and Richard H Kirk among others, although I've not decided on an order yet. And anyway, I don't get to vote.

Need help choosing artists? Wikipedia has this history of IDM music to prompt you.

Here are the house rules:

- You can submit as many or as few names as you like, as long as they are ranked with the most important *first*. If you can only think of one, that is also fine. If it's a long list, I will probably only take notice of your first ten.

- Only one list per person. You cannot vote for your own project. Please don't vote-rig or get others to vote a certain way. Suspect lists will be eliminated, destroyed and then killed.

- If something is nowhere near IDM / electronica, that vote will be quietly ignored. How I judge this is entirely dependent on the amount of sleep / sex / Windowlene I've had.

- Voting will finish at 9pm on May 19th, an hour into the radio programme, with the results revealed between 9 and 10pm on air then, later, online.

- Any derision aimed at my Battle of the Computer Bands title will be met with the fact that I nearly called this poll Chorlton And The Bleepies, which makes even less sense.

I'll leave you with details on how to vote. Go to it, chums!

Edit: Voting is suspended. No more votes on the blog, please. You can next vote tonight by contacting my radio programme from 8pm - 9pm, with the grand results being revealed from 9.30pm. Tune in to find out how.

Email ThisBlogThis!Share to TwitterShare to FacebookShare to Pinterest
Read more on: battle of the computer bands, the radio programme

Ooh, everyone likes a list. First 4 chose themselves. Orbital deserve inclusion as much for the profile they gave to serious electronic music as anything else. Black Dog wouldn't be far off, or DJ Shadow, or 4 Hero. Of people around today, Burial is on his way to a greatness of a sort, Oneohtrix Point Never is very interesting, while Tim Hecker has a very impressive and consistent body of work. But, for me, the pioneers of electronica as we understand it today are people who came to prominence in the last century.

Thank you. Of course, Global Communication.

I do not recognise your rules....

* Depeche Mode (so influential in the 80s - they turned into
Stadium Goth by 91. Listen to the album version of 1981's 'Boys Say Go' Acid was invented here)

and for number 5 - well it really has to be the 'Werk, you could clip a bit from Autobahn - somewhere in the middle with horn noises.


Actually, I think the very start of Autobahn (original 74 version) would be a great start to your show. Start playing it and then start talking about 25 secs in.

* New Order - I really love 'Your Silent Face'... just listen to the intro synths. Or Confusion (see Arthur Baker above)

* OMD - while the start of Enola Gay has to be one of the most catchy elelctronic music intros ever, try Electricity (did Kraftwerk really not sue!

http://ex-rental.com/blindyouth/studio.htm is a real joy.

JP - That's actually a brilliant list (I never realised Simple Minds ever sounded like that). I'm partial to a bit of Moroder too.

But I'm afraid, rulez is rulez and you're going to have to stand in the corner for keeping it too real.

(Loved those picture of synths, especially the MiniMoog which always gets me moist around the gills. Real music, though, is all about home computers:
http://fatroland.posterous.com/minivan-highway-song-this-is-what-all-music-u)

Aphex is a bit duh, isn't it, although it has to be said at the time of typing, he isn't number one.

Yay. An extra special badge of honour for including Mouse On Mars. Ta.

Any one for any more? Keep the votes coming!

Seeing as everyone else has done a top ten, I'll add these to my list, if that is in line with regulations:

Of course, I could easily do a top 100, but that would be a bit silly.

Sorry about the amount of Warp stuff, but I can't help it can I?

There's too many others to name. Just for interest, some of those that just missed out include

Thank you, both. Two votes for The Black Dog, good, good.

It's a shame, actually, that I'm not including early acid, but I had to pick an arbitrary time scale.

"Bob State." Next time I bump into Graham Massey...!

Voting is suspended. No more votes on the blog, please.

You can next vote tonight by contacting my radio programme from 8pm - 9pm, with the grand results being revealed from 9.30pm. Tune in to find out how.