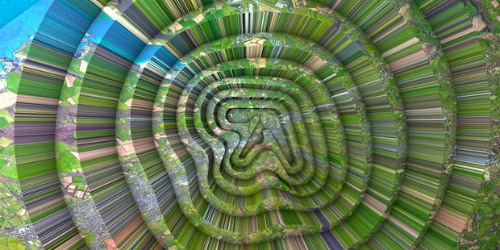 Yes. Of course it is. Don't be stupid.

Considering he's been splattering out tracks like the biggest nosebleed in the universe, Aphex Twin's latest Collapse EP seems to have clotted enough to catch plenty of attention.

Lead track T69 Collapse seems to squidge together his skippy Syro style with the cascading Windowlicking of his earlier work, and it does it to great effect. The insectoid dice rattle on 1st 44 is a real ear-tickler.

And keep an eye on the clattery and insanely melodic MT1 t29r2: it's one of his cheekiest tracks and may well end up being a live favourite. If it's not already.

The whole EP is jittery, certainly much more than 2016's Cheetah EP, but never loses its groove.

Strange, isn't it. You blast out over 200 tracks on Soundcloud, and all the beat-geeks rake through the material, with nothing getting much attention beyond forums and the occasional thinkpiece. You package up a few tracks with Warp, slap the dizzying artwork around a few tube stations, and everyone's abuzz. It's nice.

He's come a long way for a dancing teddy bear.