Five things I don't want you to know about me 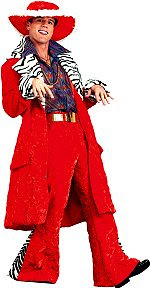 Internet memes are, like, sooo 2005, but I'm willing to give Ben Edson's tag the time of day because (a) he's a good egg, (b) one of his five things profoundly disturbed me and (c) I'm waiting for pizza.

So here are five things you probably didn't know about me, although if you have been with me when I'm drunk, I have probably confessed most of these things at some point.

I used to be a spendaholic. I would stroll round music shops and make impulse purchases with hard real money cash. One of my better decisions was the beautiful Roland JP-8000, from which I got my DJ name. At one point, I went sledging and realised afterwards I had £1,300 in cash in my back pocket. I peeled the notes carefully onto a radiator, and once they were dry, I spent every last pound on something-or-other.

I am a founding member of the Manchester Boy's Choir. I remember having a strict choir master who would make us learn a whole bunch of songs and then tell us just before a performance which ones we were going to sing. I sang with the Halle orchestra, and once walked into a pillar at the Free Trade Hall because I was nervous. I also learnt the piano and trumpet and I was a 100% wizz in theory exams.

I have almost no sense of family. My mother died when I was revising for my A-Levels, and my father died ten years ago. I had old parents, so many grandparents, aunts and uncles had shuffled off this mortal coil long before I had a chance to know them. This practical non-existence of my extended family may partly explain why I don't value 'family' as much as other people. I am not close to my two brothers, although I like them both, and I hardly know my seven neices and nephews. And if that wasn't enough, I have a half-sister I have never met (so make that ten nieces and nephews). This sounds very sad, but I fill the gap with wonderful friends, of which I have always had many.

My two worst fashion disasters are (a) my green suit and wine red tie I used to wear when working as a pop columnist on the South Manchester Reporter in the early 1990s and (b) my dangerously tight orange trousers, complete with orange jacket, I wore when I was going through my conceptual orange-and-blue-only phase. Everyone had a conceptual orange-and-blue-only phase, didn't they? They didn't? Oh...

I am going to counselling in the new year. By some people's standards, I've been through some tough times, and despite having depression for as long as I can remember, I have retained my optimism and humour. However, I don't think laughing my way through things is working any more. I am very nervous about counselling, but I do believe a broken brain has as much right to be mended as a broken arm, and believe me, some arms are more broken than others.

Edit: Welcome onboard, Patroclus. It's always nice to hear who's reading. May your 2007 be totally 2007ish.

Respect for the honesty.

I'm really glad you're going to counselling. I found it one of the most helpful things I have ever done and am now much more happy and relaxed. I had to think about how I think about things and how I respond to things and am more mentally healthy. And I hope you can be too.

I've only just started reading your blog regularly but am very much enjoying it. (Though it will be a long uphill struggle to persuade me to listen to Autechre - I fear change.)

Anyway just wanted to say glad you are getting your problems sorted out, whatever they are/were/have been, and I wish you all the best for 2007.