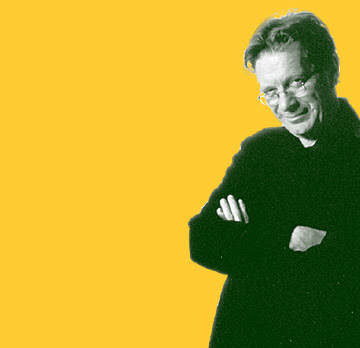 BBC News website: "Anthony Wilson, the music mogul behind some of Manchester's most successful bands, has died of cancer. The Salford-born entrepreneur, who founded Factory records, the label behind New Order and the Happy Mondays, was diagnosed last year. He died on Friday evening at the Christie Hospital surrounded by family."

I only managed a third of Anthony H Wilson's egobiography 24 Hour Party People before I flung it across the room. That'll learn that self-obsessed narcissist, I thought. You can only go so far when someone constantly refers to themself in the third person, as though they were some separate entity, like a god or an ancient spirit.

Fat Roland was not impressed.

But Wilson has a right to be arrogant. Today, the netosphere will be full of talk of his greatest achievements, including working with Richard and Judy, starring in the hilarious Cock And Bull Story and, of course, living with a former beauty queen.

Apparently, he also set up a club and a record label or something. I might have to google that one.

My iconic image of Wilson will be his early television career, hacking for Granada Reports then fronting the punktastic So It Goes.

My radio co-presenter (and now producer) Lee insists the role of a "mike jockey" is simply to be a talking box for the producers' genius ideas. He's right, of course. But Wilson held his own (oo-er) and you knew he was never an autocue slave.

I'm not sure of my Manchester credentials. I am a Mancunian, but I live in the posh bit. I was into Madchester, but at that time was just as likely to rave on to Candy Flip. I never loved the Hacienda; I only really hooked onto the place in its dying days.

That said, Wilson's passion created the Manchester I know, with its minimalist record covers, ill-fitting clothes and awkwardly placed pillars in clubs.

"Lee insists the role of a "mike jockey" is simply to be a talking box for the producers' genius ideas. He's right, of course"

It was either at the last Refresh FM meeting, or at DPercussion, or at your birthday drinks, or in the Four In Hand, or that time in Bar 38, or last time we were in Nottingham. One of them. You may have been drunk at the time, although that doesn't really narrow it down...