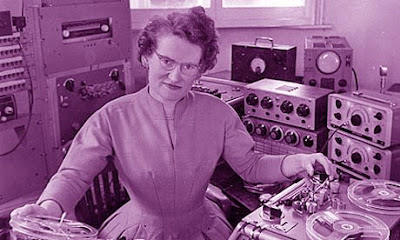 There's was something refreshing about Sunday night, like a slap in the face with a glove woven from miniature bunny rabbits.

I went to an electronic music night with seven, count 'em, seven female artists. It was a million miles from bearded nerds with bleepy toys.

But more about that later in the week.

Meanwhile, the picture above is the best picture in the world. It is Daphne Oram, electronic music pioneer and co-founder of Maida Vale's Radiophonic Workshop.

She created the Oramics machine, a piece of gear that would make the super-sleek geeks at Korg recoil:

It was about the size of a chest of drawers and was constructed from metal shelving materials. Electric motors pulled eight parallel tracks of clear 35mm film stock across scanners that operated like TV sets in reverse.

I love Daphne. Read about her in the Guardian here.