Aphex Twin's new album does not exist. Now can we just stop worrying and enjoy our knaves-- er, I mean-- lives? 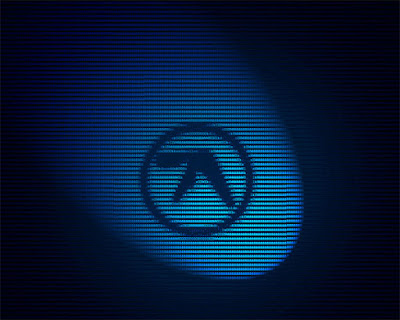 "New album title begins with the letter V. Close enough to Y for Yellow House. Only W and X getting in the way, and keeping Y and V apart."

I can exclusively reveal that "Grizzly Bear's album begins with V" is an anagram of "Warm vegetably sizzling? Rubbish!"

In other Russell Grant-style wild speculation, I can exclusively reveal that the internet is squirming with the rumours of Aphex Twin (logo pictured) releasing an album called Konklaver.

Despite the rumours being absolute guffballs (there is no 'Konklaver'), Aphex fans are dribbling over forums everywhere with their unified cry "KONKLAVER!!!!!!!!!!", wearing down their exclamation mark to a mere smudge of its former self.

Aphex Twin has long been the subject of conjecture, as fans of his pseudonym The Tuss will testify.

With titles no better than 'Fashionable Headpiece', the dull track listing of 'Konklaver' is a far cry from Aphex's rich, early names like Schottkey 7th Path, Acrid Avid Jam Shred and i.*

I can exclusively reveal that 'Aphex Twin's Konklaver' is an anagram of 'Howl, extra-pink knaves.'

Aphex Twin's new album does not exist. Grizzly Bear's, however, does.

I can exclusively reveal I have been using an anagram generator instead of watching the Grammys. Please stop reading this drivel, and pop over to YouTube where you can see a delightful video of Grizzly Bear playing in a French bathroom in 2006.

*not a typo, honest.

I'd just like to say that Konklaver is definitely happening.

Please disregard everything I have written. I have a copy of Konklaver on exclusive 14" vinyl.

I can't say I care much about the Gammys at all (my fiancee will drop names and I'm like, wha?). Still, can't quite get into Grizzly Bear either and as for a new Aphex, his recent Tuss and AFX releases have been enough for me. There's too much good stuff out there to be wasting your life away on waiting for a new Aphex release, right? lately I've been in love with a young duo from Utah(!!) called "Forest World". Now that's some Grammy material in my humble opinion! :)

Checking out Forest World. Lovely beepiness. It's good fun, although it worryingly reminds me of Joy Electric, whom I hate. Ooo, they're using phones as synths... they have phones in Utah?...

I know the feeling.

sorry to burst your bubble....

I burst my own fragile little bubble last March:

while you're worrying about pink knaves, can I push you in the version of the tube map

I'm more of a Maroon Hues kind of chap.

Worst little drop of a tangent on the internet, ever.

'Konklaver' was less of a drop, more of a mucky splatter.

afx should work with global goon

I think its afx should should do u an album with global global goon.