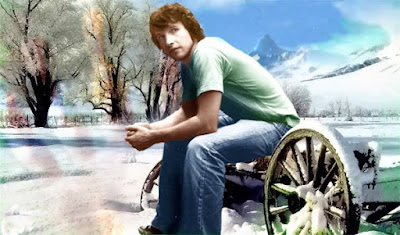 I couldn't help noticing that you aren't quite the chart presence you once were. Your last three singles, which the BBC lovingly described as "catchy and uplifting, in a Chris-Martin-on-an-off-day kinda way", have reached numbers four, 57 and 20 respectively. I would have thought if these chart positions befell Girls Aloud, KitKat's sponsorship moguls would be spluttering into their sugary tea.

May I offer a suggestion that would help return you back up the greasy pole of fame?

You need to have a synth. You need to buy a nice shiny silver synthesiser and get it into every publicity shot you can.

You don't have to play it yourself:. Maybe smuggle in a synth pop legend such as Gary Numan, Adamski or Richard Clayderman to tinkle the electronic ivories for you. Then mime playing, as though it's your big new thing. "Look, there's James Blunt, and he's a keyboard wizard," people would say, and they would point. People would point at you, although this time it would be in admiration.

You should do this. Become a chick with a synth. Every single would go to number one.

Which leads me to one last thing. You will, of course, need to alter your gender. I am quite happy to offer my services. I once cut the leg off a teddy bear with my dad's nosehair clippers, and I'm sure changing your sex wouldn't be much different.

I still have the nosehair clippers.

It wouldn't be pervy or anything. I have no desire to see you naked; I think we had quite enough of that in your 2005 smash hit video I'm Quite Beautiful. One quick snip, maybe a bit of a push-in with a sink plunger, and we can leave matron to mop up the blood.

James Blunt is currently sitting on a sunbed in his Bond villain-lair in Ibiza and I have to put two coats and a scarf on to go to the shops.

Undeleted - Look on the bright side. In twenty years time, he will look like a fried prune, and you will still have twice as many coats as him.

Anonymous - First WATMM comment on my blog. Fred McGriff wouldn't read the rules, and what the Griff does, the world does tomorrow. Or something.

I understand Freescha produced some newer material for Britney Spears, though I can't say I've heard it. I think that's the way to go for most electronic music acts - produce some hit for some crap pop act and make more money to make more excellent music. Freescha are fantastic, but they probably made a hundred times more $ producing a couple of crap tracks for Britney than from all their lps combined.

Laura - I'm not the one going to see *pulls face* Glasvegas! (I'm so smug sometimes, it makes me sick with satisfaction.)

I know where you live, Babar. I KNOW WHERE YOU LIVE. Well, actually, Fred McGriff knows where you live because he keeps files on all of us.