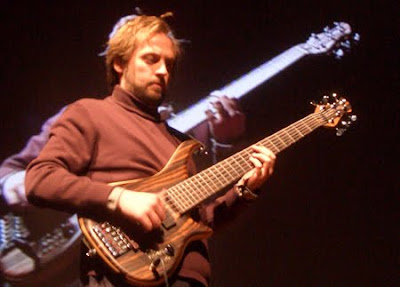 Squarepusher's Solo Electric Bass 1 is the four-cornered junglist only with a bass and a bass amp. One live event in front of an appreciative French audience. One take. One man twanging.

And it bores the eyelashes off me. It's noodlier than Wagamama, with far too few forays into 70s police show slap bass where maybe we would get a sense of the rhythmic unstructure for which Squarepusher is renowned.

I accept it's a technical triumph, but it's so pastoral he might as well be playing a harp.

Next up it's a 40 minute digeridoo solo from Aphex Twin, then 808 State on the saxomophone and nothing else, finishing with a huge Orbital opus featuring only Alison Goldfrapp's vocals and nothing else.

Actually, they all sound quite good. But you get my point. It might get his new-found Radio 4 audience tapping their loafers in gentle appreciation, but why the drill 'n' bass without the drill?

And that's the crux: if it's Squarepusher without the pusher, it's just square.

Good way of putting it. I saw the price and read the description and said no thanks. I respect the man's skills but yeah, without the beats and all, seems kinda boring.

All true. It's not a drum 'n bass album. The title sorts that out pretty well for you. I threw this one on as I laid down for bed last night ... and really dug it. There hasn't been much squarepusher in my bed-time-chill-out type playlists. Not since Music is Rotted anyways. Looking forward to the next concept ... solo Dr. Rhythm anyone?

Anonymous - you have a good point there; I should accept it as a late night album. Music Is Rotted One Note has some beautiful moments.