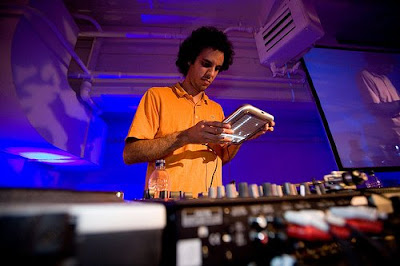 You know when you see something in the corner of your eye? A dancing clown, an robed pensioner spreading curses, an orphan boy from 14th century Cornwall miming the world 'help!' over and over again?

Maybe it's just me and my freakish imagination. But sometimes, things skip your attention. They're there, but they flit from your attention and remain a glimpse, forever to be neglected by your fading memory.

Burial and Four Tet's joint 12" is one of those such things. I totally missed it when I should have been blogging about it.

Wolf Cub is a gamelan-mashing grower of a tune and sounds like a percussion party in a Himalayan village. It has the comforting sounds of Four Tet (picture by watchlooksee) and that woody deepness of Burial.

It's a little samey, so thank goodness Moth is an epic. A light step beat and a standard trance keyboard line gives way to a spacious ambient hymn set to a crisp trance backing and wispy vocals that flutter about your ear.

Dubstep heads may not like it, because the Tet-ness of it all lightens it up somewhat. But stick Moth onto your car stereo as you bound down the M1 to a summer festival, and you'll be totally in the zone. Just don't run over any eerie Cornish orphans.

Thanks for the weather report, anonymous.