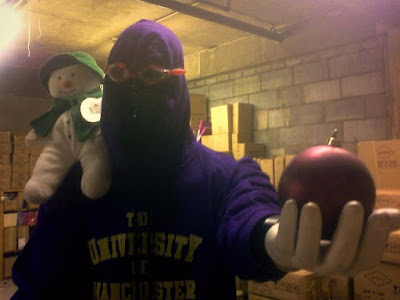 Welcome to the straggly-haired slaughter, you fresh-faced lambs. Here is the official Fat Roland guide to being a fresher.

You arrived in Manchester today lugging your duvet under your spindly arms after doing that passive-aggressive eye thing as you left your parents behind for good. You have chosen the right city: Manchester invented computers, music, politics, card games and the Nintendo Wii.;

But how do you survive in the Northern capital that also brought the world Madchester drug casualties, murderous Hacienda bouncers and, shudder, more than a few members of the BeeGees?

One. You need to know where to hang out. One wrong move, and you'll be bundled into an alley and piddled on by a tramp. These are the only places you should hang out in your first year of university: your halls, the Student's Union, anything with a Wetherspoon's logo, Tib Street, Ancoats and, after two in the morning, Deansgate train station.

Two. You have to listen to the right music. Generally, if it's got a guitar and sounds needy, it's middle-class pseudo-angst and you might as well get minute Laura Marling faces tattooed on your nipples. If it's got keyboards and the players of the keyboard sport cool hair, it could be hipster, in which case you might as well hang out at Common Bar in a cloud of your own farts. Any other kind of music is acceptable.

Three. Don't get in my way. Don't use buses. Don't walk down streets. Don't sit in bars, although if you really have to, for goodness sake don't talk. Only go to the cinema on Orange Wednesdays because that's exactly the day I don't go to the cinema. Do come into my bookshop and buy some books, but only if you're fit / cute / might be fit when you're 25.

Four. Catch as many diseases as you can, and ensure you pass them on to as many Manchester residents as possible. Illness reduces crime (and let's be honest, you're going to get robbed blind in those shoddy student digs), boosts immune systems, and I really like laughing at people thinking their world's going to end because they've got a cold. Yes, women, you do it too. Incidentally, I don't intend to catch the cold virus ever again, so this doesn't affect me. You get extra points for sexual diseases, especially if picked up on the dance floor of 5th Avenue / Cruz 101 / the Christian Union Christmas party.

And finally, five. Don't use anything digital. Unplugged is cool and preserves the 1950s culture in which Manchester truly thrives. You don't think the Happy Mondays used electricity, did you? It was all done with tooth 'n' comb and a kazoo doused in liquid LSD. Ditch your modern appliances. Buy your singles on seven inch. Get proper books. Wash your clothes using poorly-dressed maidens in a scullery. If you need to learn something, go to a library or ask a busker. And stay off blogs, because the amount of effluence dripping from their so-called good advice guides would be enough to turn Doctor Crippin's stomach.

New students: welcome to Manchester. We gave you M People, Dolly Parton and Kraftwerk. (Probably, I dunno.) Now what are you going to give back?